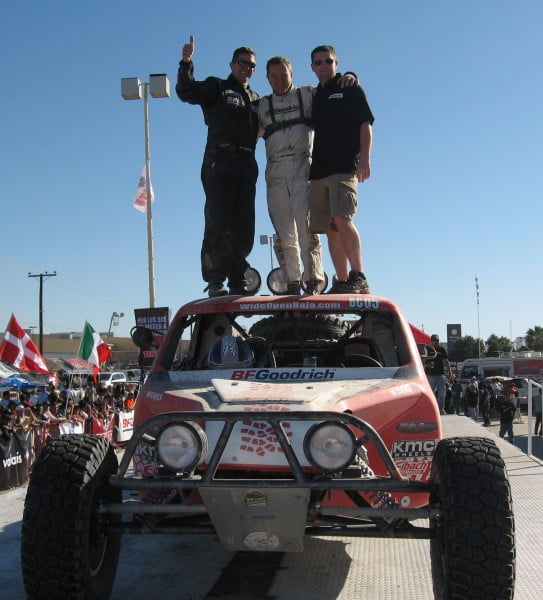 GREENVILLE, S.C. (Oct. 5, 2011) — BFGoodrich® Tires announced today the six men who will make up the 2011 BFGoodrich Tires/Wide Open Excursions “Baja Challenge” (BC) team that will compete in the 44th Annual Tecate SCORE Baja 1000 Nov. 17-20. The six drivers earned their spots in the BC race buggy through different channels — one garnered a contingency prize by placing first in the STU class at the 2011 SCCA National Runoffs, and the remaining five earned spots through Team BFGoodrich’s “Select the Seats” campaign.

The Team BFGoodrich members Andrew Comrie-Picard, Brad Lovell, Bud Brutsman, Kyle Tucker and Roger Lovell bring years of racing to the mix. Joel Weinberger, who is the most recent addition to the team, won the Super Touring U (STU) class at the 48th SCCA Runoffs at Road America earlier this year. He won the 13-lap, 52-mile race by 6.026 seconds and earned the Hawk Fastest Race Lap with a record 2:27.859 (97.390 miles per hour). Weinberger will trade in the BFGoodrich® g-Force™ R1™ tires he used at the Runoffs for BFGoodrich® Mud Terrain T/A® KM2 tires in Baja, as he looks to continue his on-road successes in the dirt.

“Winning my class at the Runoffs was a special moment for me,” said Weinberger. “I was able to celebrate the win with my father, a 50-year SCCA member. He is responsible for getting me into racing. Joining BFGoodrich’s Baja Challenge team was the icing on the cake. I can’t wait to get to Baja and pre-run with my teammates and see if we can pull out a victory.”

Looking to improve on the team’s second-place finish in 2010, Brutsman, a Hollywood producer of documentaries including “Chasing Baja” and “Born in Baja,” and Tucker, owner of Detroit Speed Engineering, will share their experiences from 2010 with the other four drivers who are joining the team for the first time. Brad and Roger Lovell add an incredible amount of off-road racing knowledge after winning six rock-crawling season championships over the years, as well as four national championships and five Traxxas TORC podiums in 2011. Comrie-Picard also knows a thing or two about driving in the dirt, and he has the hardware to prove it. In addition to his 2010 X Games SuperRally bronze medal, Comrie-Picard also has a 2009 North American Rally championship under his belt.

“Only three of the six drivers on this year’s team have experience racing in Baja, but that’s what makes the BFGoodrich Tires/Wide Open Excursions team so special,” said Silvia Mammone, motorsports manager for BFGoodrich Tires. “Each of them adds his own flavor to the team, having come from so many different motorsport backgrounds. Not only is it a great experience for them, but they will also have a good chance of standing on top of the Baja Challenge class podium.”

The 2011 Tecate SCORE Baja 1000 will start and finish in Ensenada, Baja California. BFGoodrich Tires has won the overall four-wheel title 52 times combined in the SCORE Baja 500 and 1000, including 24 of the past 25 years and a record stretch of 20 consecutive victories in the 1000 (1986–2005). More information about the granddaddy of off-road races is available at www.score-international.com.