SCORE mourns death of Ted Johnson – race-deZert.com
July 6, 2011
SCORE’s Sal Fish mourns loss of long-time friend and
former SCORE International Vice-President Ted Johnson
Johnson was vital part of the SCORE organization for over 30 years.
LOS ANGELES—SCORE International, the world’s foremost desert racing sanctioning body and race organizer, lost one of its founding members recently when former Vice-President for business affairs, Ted Johnson, passed away on June 18, 2011.
Born January 23, 1919 in North Freedom, Wisc., Johnson, 92 passed away near his long-time California home in Woodland Hills, Calif. from the lingering affects of the serious stroke he suffered over one year ago.
“Ted was the financial administration backbone of SCORE International from the days Mickey Thompson founded the company in 1973 until the last few years when he stepped back from an active role in the company, but he has been and will always be with us in spirit,” remembered Sal Fish, SCORE CEO/President recently. “Ted was a dear, dear friend and a true financial genius when it came to handling the financial end of SCORE International and several other companies that he was involved with over the many decades of his professional career. While we certainly have missed his wisdom and business acumen since he stepped down from the company a few years ago, we will miss even more his friendship and the amazing counsel he so graciously gave to me for nearly 40 years.”
Born Theodore Albert Johnson graduated from the University of Wisconsin, served four years in the U.S. Army during World War II, primarily in Italy and received a purple heart. After the war, he helped start the Department of Veteran Affairs at the University of Wisconsin.
Prior to moving to California in the late 1940s, Johnson worked for Youngstown Steel Products as an accountant.
His professional career included time as the vice-president of Schieffer Manufacturing as well as handling the finances for all of Mickey Thompson’s companies. He also assisted Keith Black company for several years and was an active partner with Sal Fish with SCORE until the early 2000s.
Ted Johnson and his wife Betty of 45 years (who passed away in 1990) had three daughters, Christine, Nancy and Sue.
Sue Johnson is a long time SCORE employee and has been the administrative director for the company for over 20 years.
Extremely found of cats, donations are being accepted in Ted Johnson’s name at the Humane Society.
Following is the internet address for donations: www.sonomahumane.org/support_us/ways_ to_ give/donations.html. 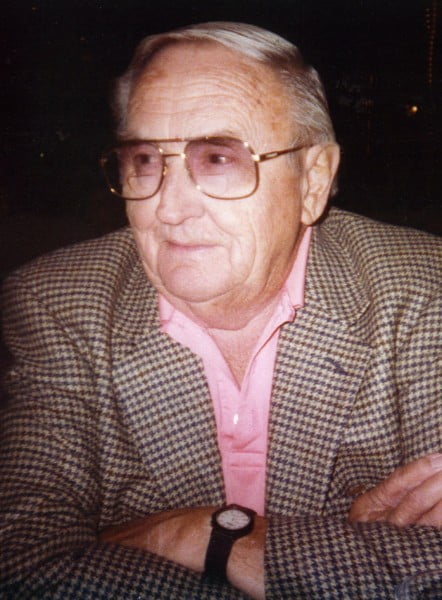