Impressive performance on ice and snow: the Polo R WRC of Sébastien Ogier and Julien Ingrassia (F/F) leads the Rally Sweden. This is the first time since entering the FIA World Rally Championship (WRC) in 2013 that the Volkswagen works team has ended a day at the top of the overall standings. Ogier moved into the lead courtesy of a stage win on Friday morning, and refused to be shifted from thereon in. The French pair won five of the eight special stages, gradually pulling further ahead over the course of the day. Their lead: 31.4 seconds over nine-time World Rally Champion Sébastien Loeb (Citroën). Their team-mates Jari-Matti Latvala and Mikka Anttila (FIN/FIN) also enjoyed a fine day, finishing in the top three on four occasions. The Finns ended day one just 1.6 seconds behind Loeb in third.

Friday at the “Sweden” was a day packed with classic stages: “Lesjöfors”, “Värmullsåsen” and “Vargåsen” were all negotiated twice. A spectator stage in the rally base of Karlstad brought the day to a close. The starting order played a crucial role on the icy special stages, which were also covered with fresh snow in the morning. Sébastien Ogier cleverly took full advantage of his right to choose his starting position first, which he earned by qualifying fastest yesterday. He was the 17th man out onto the special stages, while Volkswagen team-mate Jari-Matti Latvala started twelfth. 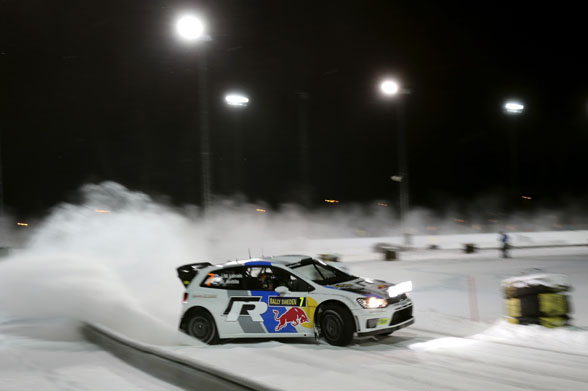 Quotes, Day One of the Rally Sweden

Jari-Matti Latvala, Volkswagen Polo R WRC #7
“It is looking good for us. Our team-mate Sébastien Ogier is extremely quick, but we are not far off him. And we are involved in a close battle for second place with Sébastien Loeb. We changed the set-up of my Polo R WRC a little on the third stage, and that had a positive effect. The performance of the car is very good, but I am not quite managing to get the very best out of it in all conditions yet. The conditions were very difficult today, and the intercom system was down at times this afternoon, so we had to improvise. All in all, however, I am very happy with the result.”

Sébastien Ogier, Volkswagen Polo R WRC #8
“An unbelievable day for us. A lead of over half a minute at the end of the first day is really a big surprise. My Polo was perfect today. Even the test in Sweden last weekend went well, but we did not know back then just how good the car is in these conditions – we know now. The team really did a fantastic job. Despite this, we still have not won anything. That was only day one of the Rally Sweden. The route is extremely difficult, as proven by mistakes from a number of top drivers. We still have two tough legs ahead of us, but it goes without saying that we now want to defend our lead until the end of the rally on Sunday.”

Jost Capito, Volkswagen Motorsport Director
“A remarkable day of rallying for Sébastien Ogier and Jari-Matti Latvala. A lead of that size at the Rally Sweden is huge. Both drivers did a great job today. We made some valuable findings regarding the performance of the Polo R WRC today. We expect another tough, but fascinating, battle for the lead tomorrow.” 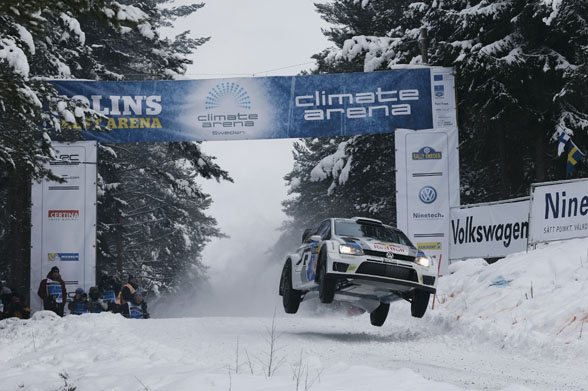 And then there was …

… a genuine sign of emotion from the likeable Latvala. At the end of the classic “Vargåsen” stage, which features the famous “Colin’s Crest” jump, his wide grin and the sentence “that car is so much fun to drive” left co-driver Miikka Anttila dumbfounded. “I have sat beside Jari-Matti on over 1,500 special stages in the WRC,” said Anttila. “But I cannot remember such a show of emotion straight after the end of a special stage.” Jari-Matti Latvala only switched to Volkswagen at the start of the year, meaning he does not have as many test kilometres with the Polo R WRC under his belt as his team-mate Sébastien Ogier. 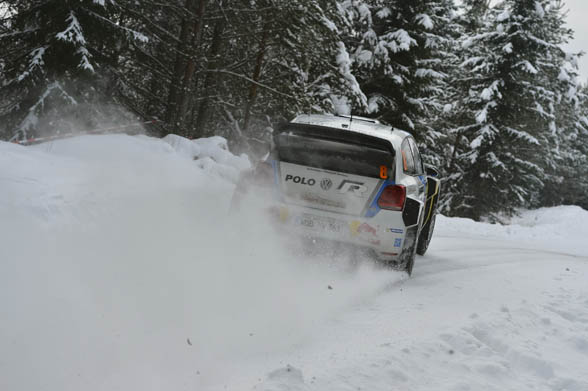