Shaffer Motorsports was optimistic heading into the Baja 500. Their win in San Felipe had them just six points out of the championship points lead and both the Transfer Case Express, Torchmate racecar and the team were working better than ever. The race started off on a bad note when without warning, the gps acted up, it was unable to locate any satellites. It took until mile 89 for the gps to function and to add to the mix their race radio was not receiving. Unbeknownst to them at the time, the crew could hear them but they could not get a response.

Despite the electronic bug-a-boos they were making good time and got out to an early lead which they held until race mile 130 where they stopped briefly to let the car cool down before heading into some particularly nasty silt and sand sections. The second place car went by but they quickly caught and passed them back by mile 140. They hauled the mail until their next pit in Borrego where Mike handed the car off to Shawn Twitchell. 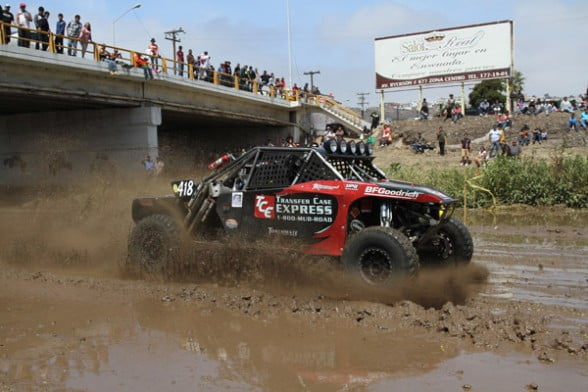 Shawn left the pit with a 5 minute lead but at mile 251 disaster struck; something broke in the transmission locking the wheels and killing the engine anytime the clutch was let out. “I was worried about second gear,” said Mike Shaffer, “We spent a long time hammering in the whoops in second gear and we’ve had problems with it in the past. It’s never failed in a race but we broke it in hard testing before. We already had a fix for it in the works but the new transmission just wasn’t ready in time for this race.”

That’s the nature of racing, one minute you are up and then lady luck turns around and bites you. Despite the mechanical issue the team did an outstanding job thanks to the volunteer efforts of Hugo, Chris, Art, Randall, John, Hunter and Ian. This was also the first time Mike’s wife Melanie ran the stateside communications and despite her trepidation did a “killer job” according to Mike.
The teams early retirement most likely took them out of championship contention but with nothing to lose they are free to go all out for the win at the Baja 1000. The team will get the new transmission in the car and then spend some time in Barstow testing its limits and getting the car sorted out before the 1000. Off-road racing continuously tests the limits of your abilities as well as your patience at times but it only makes the good teams stronger such as the case with Shaffer Motorsports. They will just be even more determined when they line up for the legendary Baja 1000 on November 14th in Ensenada, Mexico.