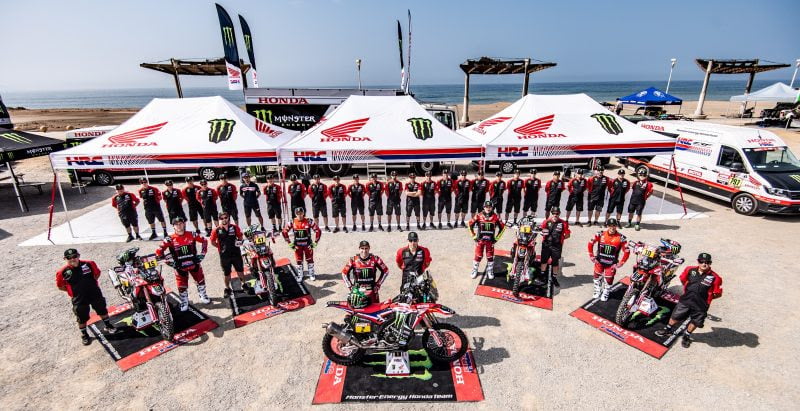 Shakedown time, the penultimate hurdle before the Dakar Rally gets underway

The action recommences for the Monster Energy Honda Team. The team are now in possession of the vehicles which had arrived at the port of Lima, after an Atlantic crossing which set sail from the French port of Le Havre. The mechanics were thus able to tune the bikes one final time in preparation for the final test before the 2019 Dakar Rally heads out.

The test area in San Bartolo some 60 kilometres south of the Peruvian capital witnessed the final dress rehearsal for Monster Energy Honda. The riders saddled up their Honda CRF450 RALLYs to complete a short stint through the dunes of San Bartolo for the final checks before the bikes undergo Saturday’s scrutineering session ahead of the official start of the great odyssey.

Kevin Benavides, Paulo Gonçalves, Ricky Brabec, Joan Barreda and José Ignacio Cornejo spent some two hours out on a course which featured sand, dunes and some stony areas, proving to be the ideal terrain to test out the bikes. The pilots came away satisfied with the set-up and are now eager to put pedal to metal on the start-line which will take place on Sunday with the celebratory starting ramp from the beaches of Magdalena on the Lima seafront.

Raul Castells
Monster Energy Honda Team Manager
We are happy to be in Lima with everything ready to start the Dakar. Everything is prepared: riders, motorcycles and equipment, all very focused on the start of the race, but first we must pass the checks prior to the official start. We are satisfied with how the team has been working so far and are pleased with the way the riders are. They are a very complete and heterogeneous team, with members from six different countries but with good harmony and a great atmosphere among them.