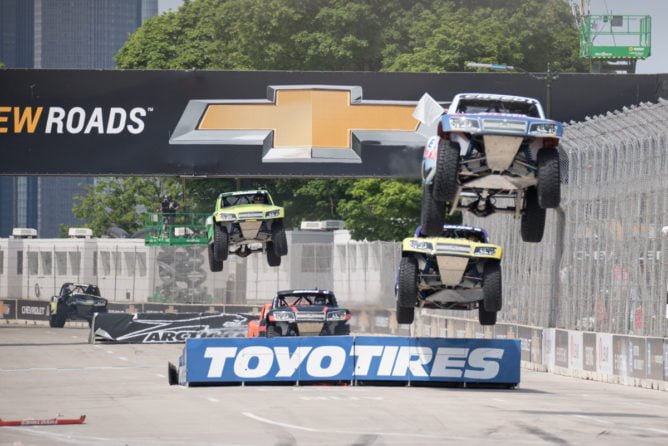 Detroit, Michigan (June 3, 2017) – Coming off victory in the last SST event held in Perth, Australia 3 weeks ago; El Cajon, California driver Sheldon Creed continued right where he left off capturing his first ever victory ever at the ultra quick Belle Isle Street Circuit in comfortable fashion.

The 2015 & 2016 Stadium SUPER Trucks Champion would start the nine-lap event from the third position after encountering transmission issues during qualifying. Making the best out his worse qualifying effort in three years. The driver known as “The Show Stopper” jumped out to the lead before Turn-3, and literally became the showstopper putting his SafeCraft Safety Equipment truck on autopilot the rest of the event.

Being uncontested the entire event, Creed ran away from the field capturing the 30 victory of his SST career.

Fast Qualifier Gavin Harlien of Mesa, Arizona would start his first ever race on the Belle Isle Street Circuit in the last position. The driver whom has been on absolute fire in Stadium SUPER Trucks competition in 2017 placing on the podium in nearly every event. The driver of the Royal Purple Synthetic Oil truck would work his way to the front of the pack in no time challenging for a position in the top-five quickly. After contact between Team UFD Teammates Paul Morris and Arie Luyendyk Jr. that made both drivers and Matt Brabham loose momentum and re gain control of their skidding Toyo Tires.

Harlien would take advantage of the skirmish in front of him to sneak by the three drivers and jolt into second place. Withstanding a hard charging Matt Brabham of Gold Coast, Queensland, Australia the remaining laps Harlien would finish in the second position. Brabham driving the DeVILBISS/ Hawk Performance entry would follow Harlein to the line to claim the third position.

Current SST World Championship point’s leader Paul Morris of Gold Coast, Queensland, Australia would start from the fifth position and quickly jump to the second spot following early leader Creed. After making contact with Team UFD teammate Arie Luyendyk of Scottsdale, Arizona Morris would loose considerable ground to the lead pack. The veteran driver looking to gain as many points as possible in the championship hunt would finish in the fourth position.

Detroit native of Aaron Bambach making his 2017 SST debut driving the A3 Strategic Staffing Solutions truck would continue to keep his truck clean the entire race from his sixth starting position to bring home a fifth place finish. The conservative racing Bambach proves each time out in an SST truck that contact in SST racing is not the only way to make a clean pass.

Jeff Hoffman of Phoenix, Arizona would once again show strong signs of competing for a podium early in the event keeping up with the quick pace of Harlien and Brabham moving forward from his eighth starting spot. Hoffman would keep his truck clean going on to finish his first race at Belle Isle in the sixth position.

Davey Hamilton Jr. of Indianapolis, Indiana substituting driving for Robby Gordon whom is in Mexico competing in the Baja 500 would start on the pole position after flipping his truck in qualifying on Friday afternoon. Keeping his Kevin Howell Construction/ Toyo Tires truck clean and falling into line, and not making any risky moves the son of former Indy Car racer Davey Hamilton would finish in the seventh position.

Always Evolving/ Replay XD driver Erik Davis of Burbank, California making his first start at the tricky Belle Isle Street Circuit would struggle finding his marks in the No. 75 truck. Driving a conservative and clean race Davis would cross the finish line in the eighth place.

United Fiber and Data/ LIVE driver Bill Hynes of Nazareth, Penn., would go on to finish the nine-lap event in the ninth position ahead of teammate Arie Luyendyk Jr. who would battle hard with the other Team UFD member Paul Morris early in the event. After several corners of bumping and banging the Lear Corporation back truck of Luyendyk would encounter an oil leak, and spin him himself into the tire barrier ending any chances at a good finish.

First time SST starter Atila Abreu of San Paulo, Brazil driving the Shell V-Power/ Monster Energy truck would start from the eighth position after qualifying very well. However the experienced road racer would encounter trouble after the first competition caution, hitting the second ramp in front of the main grandstand not completely square launching the No. 51 catapulting side ways ultimately landing on its side and rolling back onto its wheels. Abreu would drive back to the paddock area under his own power, but would retire from the race and be recorded in the eleventh position.

Fans can tune into the race by visiting http://www.stadiumsupertrucks.com or by viewing the Stadium SUPER Trucks Facebook Live at http://www.facebook.com/StadiumSuperTrucks.