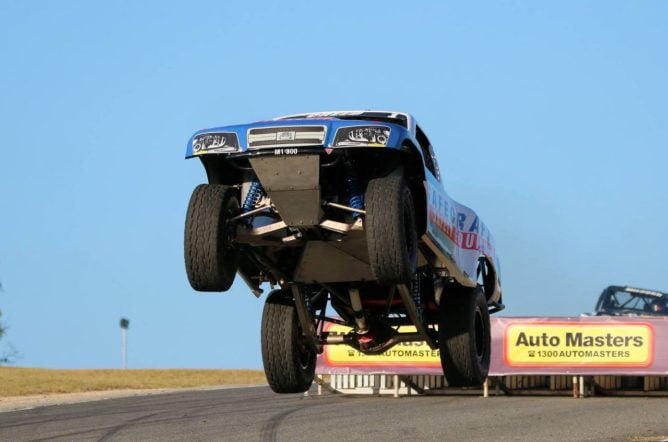 Perth, Western Australia (May 5, 2017) – Sheldon Creed escaped a huge wreck on Lap-2 to claim his second victory of the 2017 SST World Championship.

With this weekend being the first visit of the SST trucks to the fast and slippery 13-turn 1.78-mile (2.85 km) permanent road course many drivers would struggle to hit their marks throughout the race and stay on the actually racing surface.

First time SST starter Jake Kostecki of Perth, Western Australia claimed the highlight of the race as the 17-year old SUPERCAR test driver filling in for SST regular Erik Davis driving the Always Evolving/AerNow truck would become crossed up and make contact with the TruFuel truck of Travis Milburn. The slight contact over the ramp would send Kostecki into a series of serious barrel rolls. 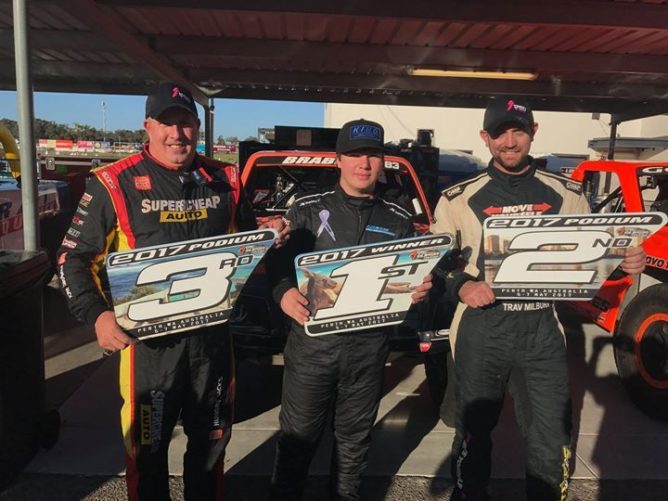 As drivers scrambled to avoid the rolling truck of Kostecki, El Cajon, California driver Sheldon Creed, and Gold Coast, Queensland’s Paul Morris would take advantage of the situation and immediately work there way to the front of the field.

Creed would stalk the Toyo Tire tracks of Nazareth, Pennsylvania driver Bill Hynes, and set him up for a move to grab the lead on Lap-6. As Creed would run away from the field Travis Milburn of Adelaide, South Australia would put on a battle for the second position as the TruFuel entry, and Morris in the Ridge Ryder 4×4 Accessories truck would battle door to door for the remaining laps putting on a show for a capacity crowd in attendance.

Driving the SafeCraft Safety Equipment truck this weekend the 2015 & 2016 SST World Champion would claim his second victory of the 2017 season in convincing fashion. Milburn would best Morris to the line for the second spot, while Morris would round out the podium.

Robby Gordon from Orange, Calif., back driving his familiar Orange and Black SPEED Energy/ Toyo Tires truck would advance to the front of the pack after the competition caution to finish in the fourth position, while Penola, South Australia off-road veteran Greg Gartner rounded out the top five in his R&J Batteries/ Delkor Calcium Battery No. 410 truck.

Second Starting Bill Hynes would jump out to an early lead, and hold off the eleven SST trucks behind him for six laps showing strong signs of driving the Road Pod Transport Transformed truck to victory. A slight slide up the track in the up hill section with just two laps remaining would allow eventual winner Creed and others to get by. Hynes would go on to record a sixth place finish in an impressive run for the savvy SST veteran. 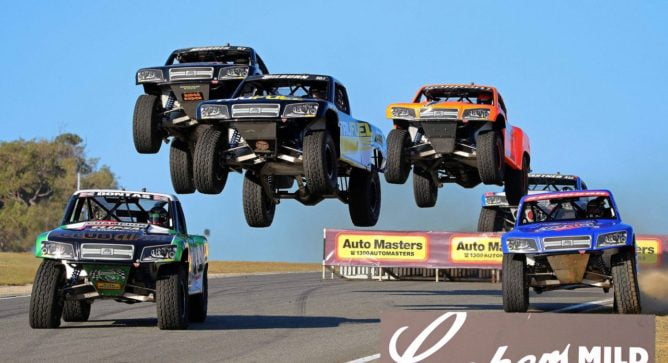 Third starting Craig Dontas of Adelaide, South Australia driving the Shannons Insurance/ AutoMasters truck would fall back at the beginning of the race and ultimately would get scored in the seventh position.

Scunthrope, United Kingdom driver Shaun Richardson driving the Positive Quality Trailers truck would run in the top five for the first half of the race, but would encounter late race contact, and would be scored in the eighth position at the finish of the ten lap event.

Beau Robinson from Perth, West Australia making his first SST start driving the Western Australia Fire Protection No. 13 would struggle to get the handle on his SST truck dropping back from his front row starting position early in the event to try and learn from the best in the business. Robinson would complete all the laps and would to cross the finish line in the ninth position.

Friday morning Fast Qualifier Matt Brabham of Gold Coast, Queensland would not take the initial green flag of the race, as he would pull to his DeVILLBISS backed entry to pit lane prior to staging with serpentine belt issues. After missing the start of the event SST crewmembers would continue to trash to get the truck back on the track. Brabham would rejoin the field at the half way caution, and complete the remaining laps to be scored as the last running truck in the tenth position.

Mesa, Arizona driver Gavin Harlien driving the Royal Purple Synthetic Oil truck would encounter power steering and engine issues early in the event after dodging the flipping truck of Kostecki. Harlien’s truck would be towed off the racing service, and recorded in the eleventh position in the final run down.

After a result the colossal roll over on Lap-2 the Always Evolving/ AerNow truck of first time SST competitor Jake Kostecki would acquire too much damage to continue the event and would be credited with the twelfth finishing position after failing to complete the scheduled laps.

Fans can tune into the race by visiting http://www.stadiumsupertrucks.com or by viewing the Stadium SUPER Trucks Facebook Live at http://www.facebook.com/StadiumSuperTrucks.

*Fans in Australia and New Zealand will be GeoBlocked from LiveStream and can tune in LIVE on Fox Sports. Check you local cable or satellite provider for channel details.

About SPEED Energy Stadium SUPER Trucks
Influenced by the former Mickey Thompson Stadium Off-Road Racing Series, where drivers such as Gordon, Casey Mears and seven-time NASCAR champion Jimmie Johnson got their start, Gordon created SST in response to the public’s overwhelming interest in trucks and off-road racing. His plan to re-launch the former stadium series has led to exciting racing on both asphalt and dirt, while producing one of the most extreme forms of action sports today.