Sheldon Creed completed a weekend sweep in the SPEED Energy Formula Off-Road Presented by TRAXXAS race at Toronto Sunday by edging Robby Gordon for the second day in a row winning both weekend races.

After winning last season at Toronto, Sheldon Creed of Alpine, Calif. picked up where he left off in the SPEED Energy Formula Off-Road Presented by TRAXXAS series by winning again on the picturesque downtown street circuit in Canada in Saturday’s race. 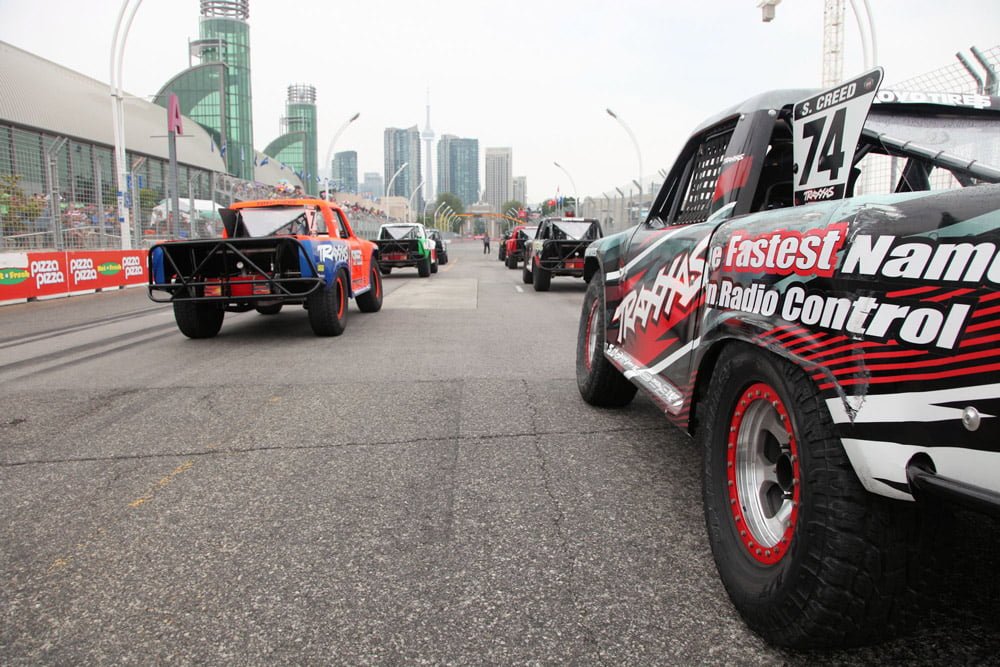 On Saturday, Creed’s TRAXXAS-sponsored truck fought alongside fellow 16-year-old Scotty Steele’s machine for most of the race until Steele made a late mistake on the final lap, which relegated him to a third-place finish, allowing Robby Gordon to inherit second. Creed started last in the field given that he missed the pre-race driver’s meeting, but drove a steady smart race in the rain to pass every truck in the field en route to victory.

“The difference in driving on asphalt and concrete was incredible,” Creed said referring to the wet, slick conditions.  “Scotty was great on the concrete, and when we came off the asphalt his truck just took off.  I’ve made a couple of late mistakes in these races and thrown a few away, and I wasn’t going to do it again.  I just took my time and didn’t over drive the truck.” 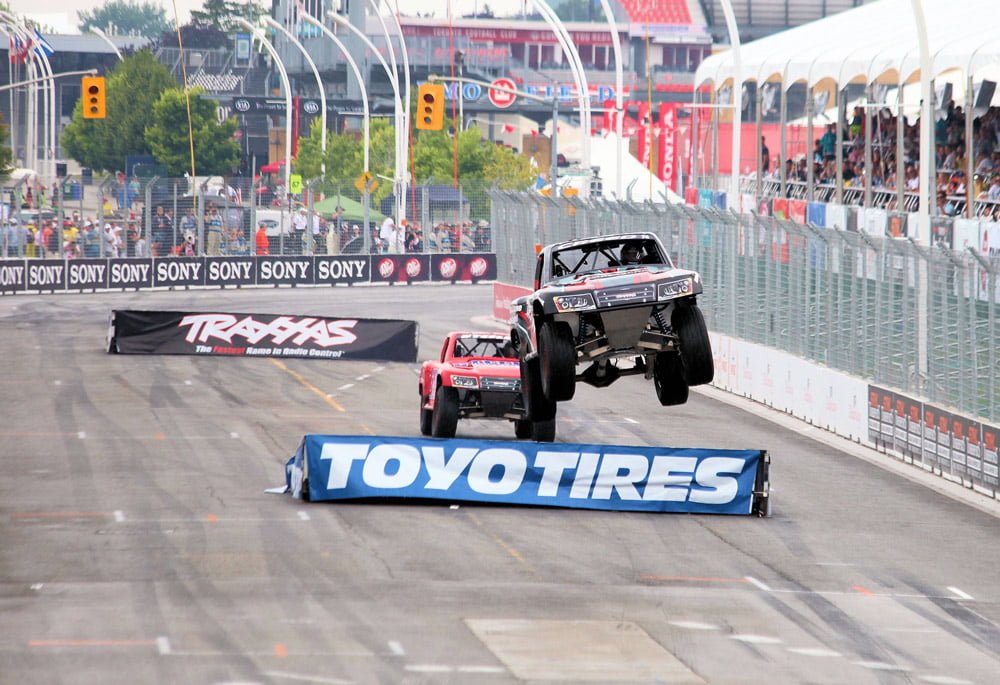 Michigan’s Aaron Bambach came home fourth in his 3deminsional.com truck, with Mexico’s Apdaly Lopez finishing fifth after not getting any practice during Friday’s session where he crashed in turn one of lap one of the session.  Toronto’s Paul Tracy fell victim to the wet conditions early in the race and came in sixth, as did Bill Hynes from Nazareth, Pa. in the Freaks for LIVE truck who finished seventh. 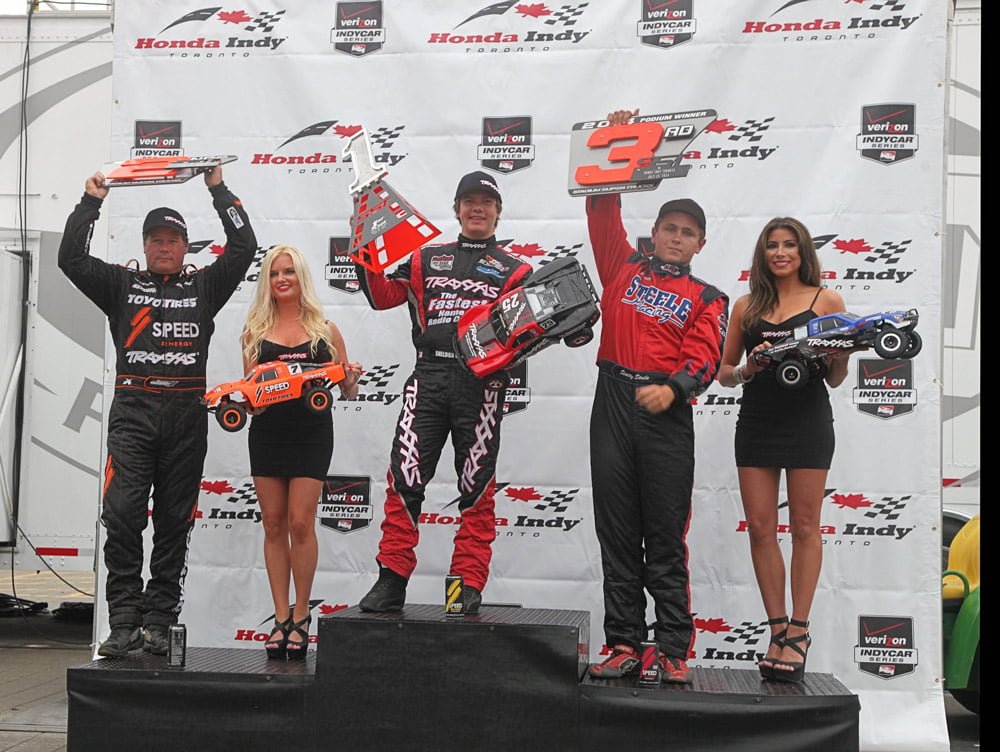 The Stadium Super Trucks that competed in the second race in Toronto Sunday will jump 36-inch tall man-made ramps at more than 100 mph at multiple locations throughout the downtown street circuit hurling drivers nearly 20 feet in the air and 150 feet down course.  The series features identically prepared trucks which are made to resemble their scaled-down Traxxas radio-control-car counterparts.  Like their Traxxas namesake the trucks are designed to take flight.  However, unlike RC trucks, they produce 600 horsepower generating speeds upwards of 130 miles per hour and race on DOT approved Toyo Tires.

Unlike Saturday’s slippery track, warm and dry conditions produced a thrilling battle between Creed and Gordon. The two drivers battled relentlessly for virtually the entire 10-lap race, with nearly every fan in attendance at the 11-turn street circuit in Toronto standing to watch the spectacle, with thousands crowding the fence line with camera phones in hand. 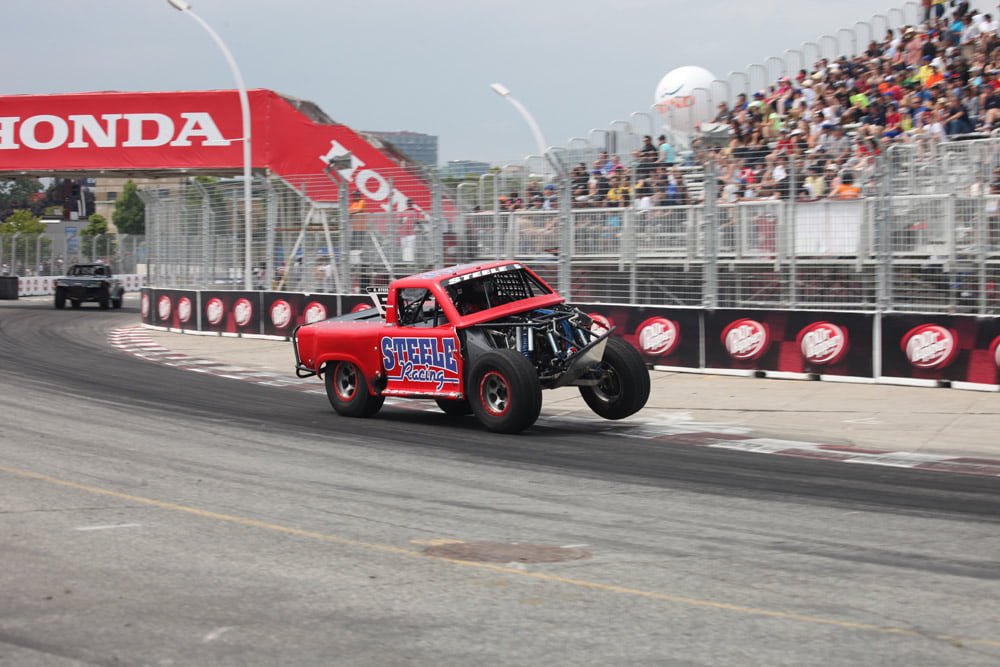 “It’s obviously pretty cool to win two times in a row here at Toronto,” Creed, 16, said. “Today was a much better race given that it was dry. We could go hard and Robby and I had a great battle. We both got sideways in turn 3 there at the end and I was able to put some distance between us, but about three turns later he was back on my bumper.”

Canadian Native, Paul Tracy finished fourth in his TRAXXAS-sponsored truck, Mexico’s Apdaly Lopez finished fifth in the RPM Off-Road/VisitMexico.com truck, Aaron Bambach in the 3dimensional.com truck finished sixth, with Nick Vanis in the Outlaw LED by Robby Gordon No. 10 and Bill Hynes in the Freaks for LIVE truck rounding out the field. 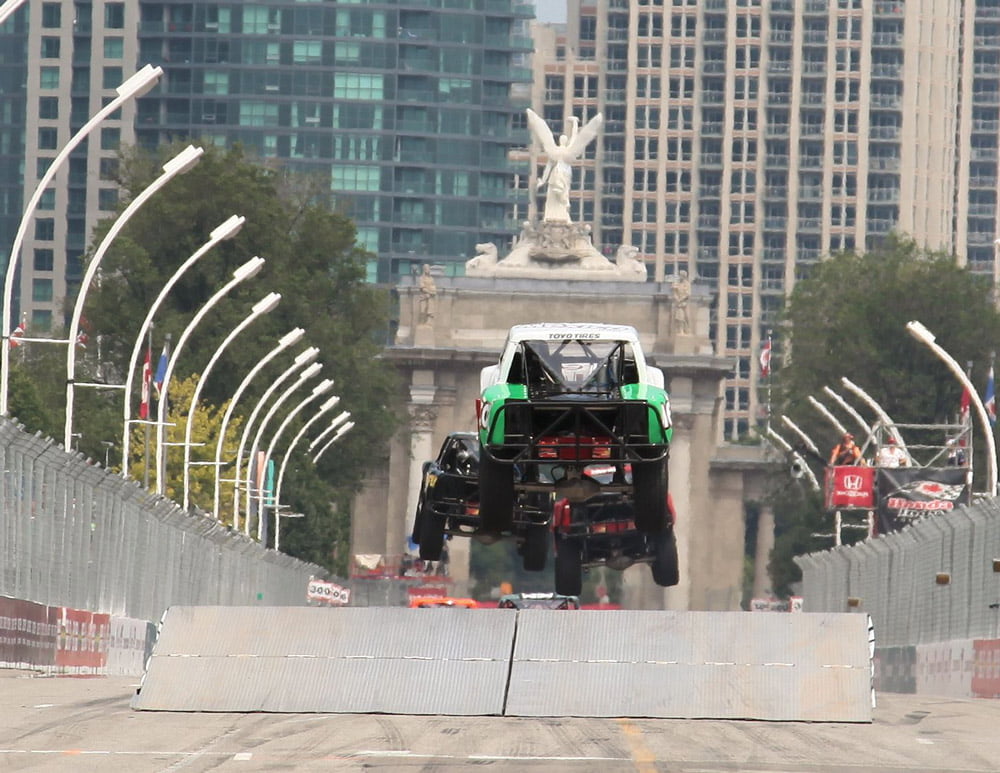 “I leaned on him a little bit there and he gave it back to me,” Gordon said. “Sheldon did a great job as did Scotty and both of these guys are going places with their careers. People will hear a lot about them for years to come. I could get to Sheldon’s bumper, but I had to check up going over the jumps to make sure that I didn’t land on him.”

NBCSN will broadcast the race at 10 p.m. PDT on July 31 (1 a.m. EDT Aug. 1). Following its trip to Toronto, the series will shift to the west coast for its final four races of the 2014 season at the Sand Sport Super Show in Orange County, Calif. Sept. 19-20; the Coronado Speed Festival Sept. 21 and Las Vegas in conjunction with the SEMA Show in early November. 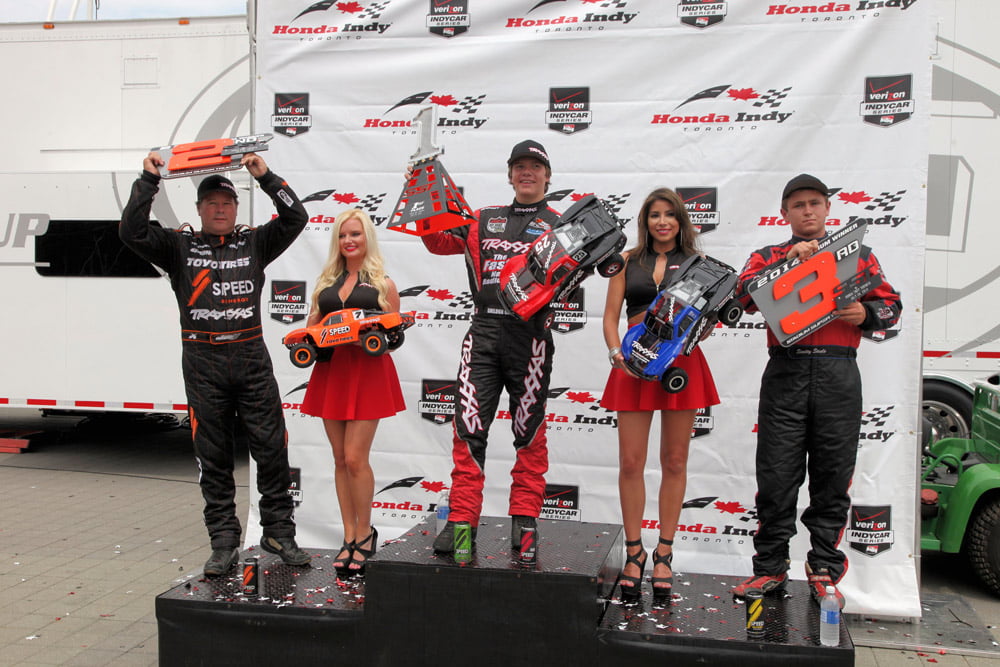