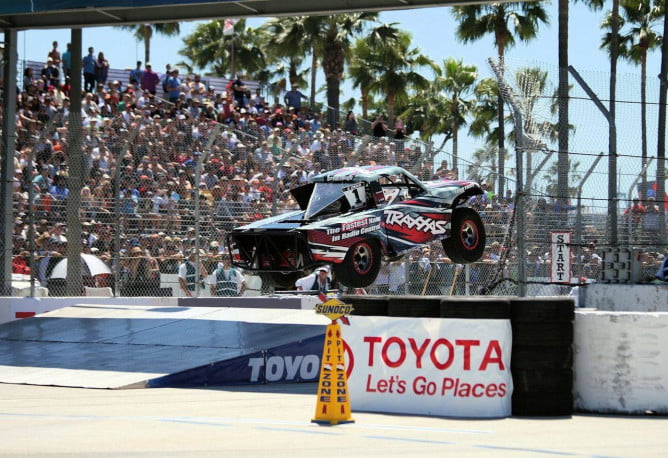 Round 6 at the Grand Prix of Long Beach

LONG BEACH, Calif. (April 16, 2016) – Sheldon Creed of Alpine, Calif. managed to avoid the carnage in the first half of the race, and work past early leader Matt Brabham on Lap-5 to his earn his fourth SPEED Energy Stadium SUPER Trucks Presented by TRAXXAS victory of the 2016 World Championship.

Surfers Paradise, QLD, Australia driver Matt Brabham driving the United Fiber and Data No. 83 would start on the pole position and bolt out to a early lead putting distance on the 11 other TRAXXAS trucks by the second lap.

However, Creed was also on mission working his way through the field from his eleventh starting position all the way into the second spot behind Brabham by Lap-2.

While fellow Californian Tyler McQuarrie of Walnut Creek, Calif., driving his SafeCraft Saftey Equipment truck put on a show for the capacity crowd that lined the 11-turn 1.968 mi temporary street circuit as he would barrel roll his No. 6 off the front stretch ramp running in the third position.

In Stadium SUPER Trucks fashion, McQuarrie would proceed to land on his wheels, work his way to the pits to change a flat tire, and still mange to keep his truck in contention for the win.

The caution would fly over the track on Lap-3, McQuarrie would use that caution to his advantage as he rejoined the field and began his quest back to the front of the field.

As leader Brabham and Creed battled for the lead, McQuarrie would avoid multiple spun trucks as he worked his way back into the top-5 by Lap-6. Brabham would make a mistake bicycling his No. 83 around a corner giving Creed the opportunity to pass him. A spinning Paul Morris with two laps to go would put McQuarrie back into the third position

The battle for second was fierce, however no one was going to catch the 18-year old Alpine, Calif., native as he drifted corners smoking his Toyo Open Country A/T II tires the last few laps much to the delight of the roaring crowd en route to his 17 win of his SST career.

Brabham would hold off McQuarrie to finish in the second position. McQuarrie would claim his third consecutive third place finish in all three North American events in 2016.

Paul Morris of Norwell, QLD, Australia driving the United Fiber & Data/ LIVE truck No. 67 would finish his second consecutive race in the fourth position driving a smart race and keeping his truck clean the entire 12-laps.

Dustin Scott of Inver Grove Heights, Minn. would show strong signs of competing for a podium early in the event keeping up with the quick pace of Creed, Brabham, and McQuarrie, but would find trouble in the final corner of Lap-2 spinning his SPEED Energy/ Cobra Transportation backed entry ultimately loosing multiple positions and having to work his way back through field. Scott would go on to finish the event in the fifth position.

Making his return to Stadium SUPER Truck competition after a year hiatus Erik Davis of Burbank, Calif. driving the Always Evolving/ AERNow No. 75 would survive a near roll over to finish in the sixth spot ahead of Pleasant Hill, Calif. driver Pat O’Keefe in his SafeCraft Safety Equipment No. 14.

Davey Hamilton of Nampa, Idaho in his return to SST racing would struggle getting caught up in multiple altercations in the 12-lap event, but would survive the carnage to finish the race eighth.

Robby Gordon of Orange, Calif., would experience a broken lower-left control arm after making contact with Creed on Lap-4 and collecting five competitors behind him. Gordon would retire his Arctic Cat Wildcat/ Toyo Tires/ TRAXXAS No. 7 early and would be credited with the eleventh position.

Crandon, Wisc., driver Keegan Kincaid would get the worst damage of the early Gordon spin severing a water line, and leaking out all of the water in the cooling system. Kincaid would get towed off the track and would be scored in the twelfth position.

The second and final round of the SPEED Energy Stadium SUPER Trucks Presented by TRAXXAS at the 2016 Grand Prix of Long Beach will take place Sunday at 4:00 PM PT just after the completion of the IndyCar Series event.

Fans can tune into the race by logging into the www.stadiumsupertrucks.com and clicking on the Live Stream link.
SST Grand Prix of Long Beach 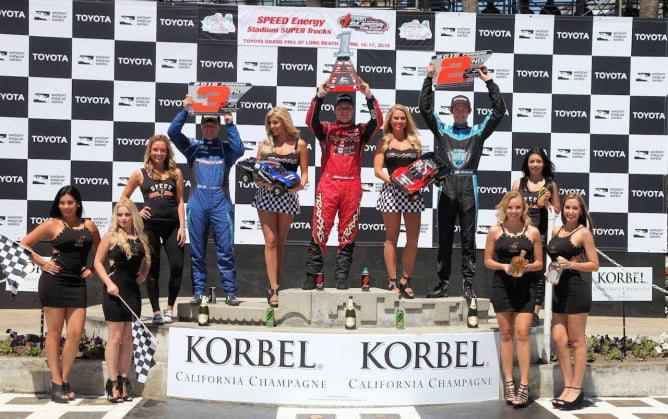 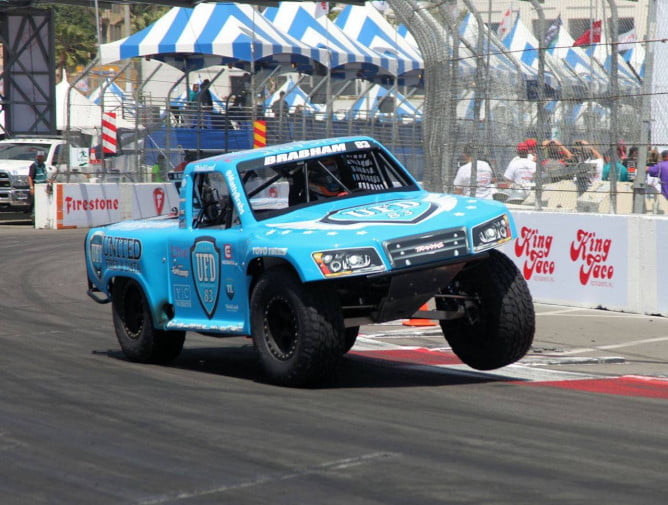