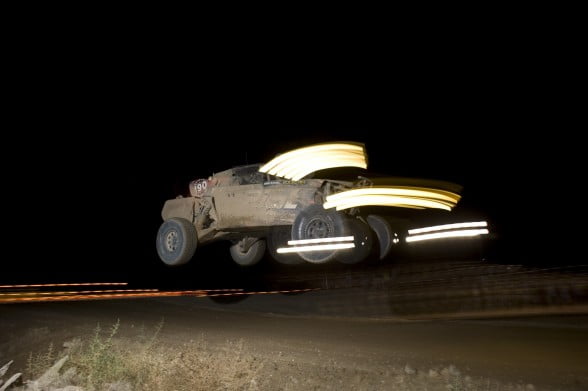 PRIMM, Nev. — The 2011 SNORE KC HiLiTES Midnight Special presented here July 29-30 is now history, but it goes without saying that the end result is undoubtedly what could be termed one of the true miracles in the history of motorsports.

Thanks to last-minute team work on behalf of the 42 year-old Southern Nevada Off-Road Enthusiasts and a hearty group of hotel-casino executives, the event brought attention to this city 30 miles south of Las Vegas while also attracting a field of about 100 race vehicles and their crews.

A very unique event that usually begins at dusk before running well past midnight to escape the heat of the desert, the race included two nights of competition over an 8.6 mile layout that started and finished behind Buffalo Bill’s hotel casino just east of I-15.

With SCORE headed south and SNORE discovering only a few weeks ago that their original venue of the Indian Reservation north of Las Vegas wasn’t possible, a call to Primm saved the event while also bringing business to the city formerly known as Stateline.

While there were certainly both winners and losers in the race, the key component was the fact that the race was even made possible following the late exit by noted SCORE promoter Sal Fish who pulled the plug on the Terrible’s Primm 300 only weeks earlier before moving his race to Baja, Mexico.

Kyle Conlan, a 22 year-old electrician from San Diego, captured the overall win in a Jimco 1 with two-day, eight-lap total time of 2 hours. 21.05 minutes. His consistent times were highlighted by a best of 11.367.422 minutes on the fifth lap Saturday night.

“In my first heat, I broke the sway bar and ran the entire race without it,” said Conlan, who is running in his second year of competition. “Then, in the second heat, the alternator went out, but we had enough juice to make it to the finish.

“I would have to say that the high point of the race for me was just getting to the finish line. I hadn’t been able to get a first out of the car prior to this race. I’m really happy to both finish and get a win at the same time.”

“We wanted to run the overall strong” said Wyllie, who has been racing since 2003. “We had electrical issues on the final lap the first night. The course was toughest in the silt bed after you left the infield.”

In a statement echoed by just about everyone, Wyllie added “Considering the time that SNORE had to work with this, it was a mad scramble. All things considered, they did a great job. Them putting on this race any place was a Mission Accomplished, for sure.”

Olliges, a 48 year-old veteran who has been off-road racing since he was 18, said the race was a good shakedown event for the Best in the Desert Vegas to Reno event scheduled Aug. 18-21.

“It was great seeing everyone out there,” said Olliges, whose family has been in the car business for decades. “Then, too, it’s good getting the extra seat time.”

Justin Davis of Chino Hills, Calif., captured Class 10 although he, too, had his own challenges.

“We had a good weekend although our wiring railed on us Saturday,” said Davis, who is in the landscaping business. “Overall, I think the race went very well. I like the Grand Prix style where you just get out there and run as fast as you can. I think SNORE did an awesome job.”

Kenny Freeman, a member of SNORE’s board of directors and also the winner of Class 1600, predicted that the KC HiLiTES Midnight Special was the first of many off-road races in Primm.

“There were things that we could have done differently, but overall it was a good event,” said Freeman. “We received incredible help from the good people of Primm Valley Resorts and had it not been for them, there probably would not have been a Midnight Special this year.

“I think there will be even bigger off-road racing events in Primm in the future.”

Danny Fraire, a spokesman for the Location’s Racing Class 8 truck No. 8006, said “We didn’t have our lights aimed for the really tight sections on Friday. We adjusted for Saturday night and our driver Rick Harrah went for it and captured our first win.”

John Whitlow, the car chief for the NAPA Chassis No. 7155 truck driven by Peter Garfinkle, said “It must have taken a ton of coordination with the Primm property people to make the race happen.”

“We appreciate all the racers that supported our Midnight Special, especially after the venue chaos leading up to this event,” Gross said. “The majority of comments has been very positive and indicates the racers awareness of the many challenges we faced in putting this event together in less than three weeks.

“I hope to see all of you at our SNORE 250 in Ridgecrest CA in October.”

Race Registration Director Brittany Burgos added “The staff at Primm Valley Resorts was certainly gracious and extremely helpful in meeting our needs in the short timeframe we were forced to adhere to.

“Primm is always a great destination for a SNORE event and the racers love it.”
SNORE Director of Marketing Lawton Shank said the new format utilized added to the event.

“This year’s KC HiLiTES Midnight Special was interesting in that it consisted of two nights of heat racing rather than one long night event,” Shank explained. “This gave the drivers and spectators an opportunity for two nights of action for racers running with lights.

“The famous ‘Dike Jump’ became even more of a challenge for competitors at night, and was a great viewing area for spectators both nights.”

The praise of the race was also echoed by the staff of Primm Valley Resorts.

“We were thrilled with the Midnight Special results at Primm Valley this year,” said Stuart Richey, assistant general manager of Primm Valley Resorts and Casinos. “Congratulations to SNORE for an excellent event and to the hard-working teams that surpassed the rain and early hours for a tremendous victory. We look forward to another competitive run in the near future.”

SNORE’s next race is 42nd annual SNORE 250 Oct. 21-23 in Ridgecrest, Calif. Further information can be found by visiting www.snoreracing.net.

Editor’s Note: Mike Henle is a Las Vegas based freelance writer who has covered auto racing for more than 40 years. His web site www.mikehenle.com focuses on various topics.

ABOUT PRIMM VALLEY RESORTS: Situated about 30 miles south of Las Vegas, Primm, Nev. is the home of Primm Valley Resorts and Casinos and is situated on the Nevada-California state line. It consists of three hotel casinos, a large outlet mall; and a multitude of recreational activities including two championship Tom Fazio designed golf courses. Hotels include Whiskey Pete’s Hotel and Casino; Buffalo Bill’s Resort which features a 6,000 arena for concerts and events; and Primm Valley Resort and Casino; with 21,000 square feet of outstanding convention space; http:www.primmvalleyresorts.com/index.php.