Menu
Log in
Register
Sonora Rally is a challenging event. Rally Director Darren Skilton and his team create daily courses that mimic the Dakar Rally. “We tried to ease them into the dunes, so we added some new terrain but also made the end of the stage navigation very tricky. Its always hard the first day in the dunes. You have to switch your brain around and think differently to be successful. We are proud of the stage, there were a lot of challenge in a short distance, with a lot of tricks. It was a real stage with fast roads, sand dunes and coastal beaches” says Skilton. 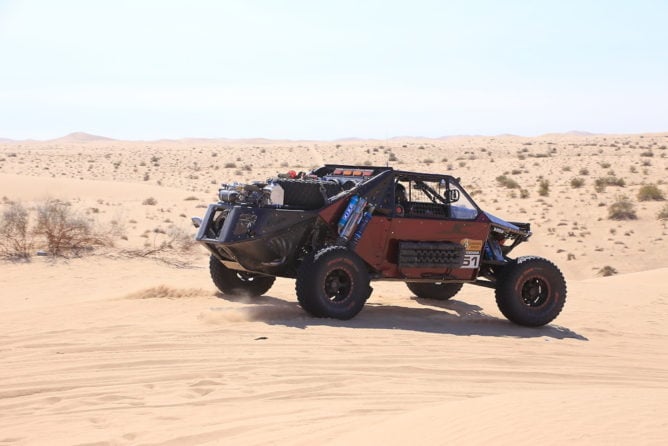 In the car category the Jergensen buggy was the fastest time today beating out last years winner Erik Pucelik by about 8 minutes. “We made one small mistake that cost us the win today, but we will be back tomorrow for the fight! Sonora rally is a great race. Take the very BEST five miles of the Baja 500 or San Felipe 250 and put it over here in Sonora … that’s the entire terrain each day … its the entire race” says Pucelik.
Dakar veteran navigator Kellon Walch was third in the car category today and despite extensive Dakar dune experience, he was in awe of the massive Sonoran dunes. “Today was pretty gnarly. Some soft dunes and some gnarly steep downhills. You really had to work your way around it” says Walch. 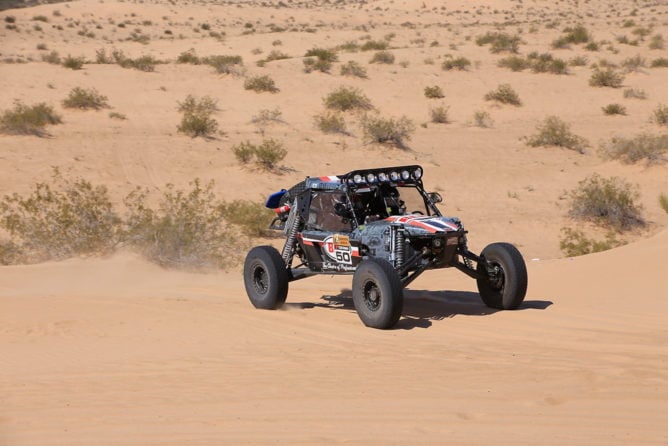 Meanwhile Monster Energy racer Casey Currie was pushed out of his comfort zone being new to navigation and rally raid. However he embraced the challenge with enthusiasm and excitement, trusting his navigator Tucker Conroy to guide them to the finish line. “Sonora Rally is unbelievable. I have never been on the main land side …  To experience sand dunes way way way taller than Glamis, while learning a new task and style of racing, I am totally hooked. The idea is for me and my team to tackle Dakar in 2019. Talking to everyone at ASO and other teams around the world, they all recommended that I come here. I am studying every day, learning as much as i can so that when we go to Dakar, we will be ready.” says Currie. 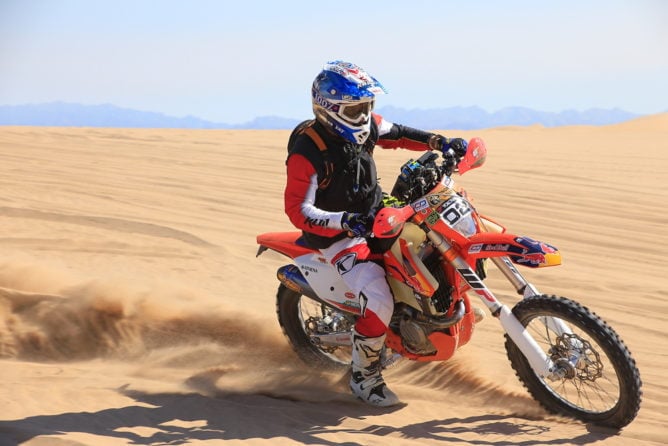 First time Sonora Rally entry Skyler Howes made a big impression in the bike class finishing first overall and first in the “Road to Dakar” challenge. Garrett Poucher came in second followed by newcomer George LaMonte who was third and Mexico’s Carlos Gracida who finished fourth.
In the Safari class, Yokohama’s Melissa Eickhoff and Sydney Olsen had quite the adventure. Sydney was shocked at the size of the dunes and the way their Jeep Wrangler made it through. “The big moment today was when we got to WP 49. We couldn’t go straight up like everyone else, and had to make our way around the dunes, and at one point we were 6 km away from the waypoint. But bit by bit we picked our way through and found it. The “beeps” become an addiction. Once we got it we were really proud of ourselves. We found our own way, not following anyone’s tracks, and setting our own course. I’m really proud of my navigator, Sydney, she’s a girl who is not often pushed out of her comfort zone. Today she was definitely uncomfortable but at the same time embraced it fully and navigated like a pro”, says Eickhoff.
Day two of the Sonora Rally will be 151 km on the “Road to Dune” Highway. There will be more tricky navigation challenges coming at the competitors. “These are the largest dunes in North America. Today’s stage will be the toughest of the rally and will hold the longest HP section, which includes a 23 km single heading with no WP’s. It will be spectacularly beautiful but it will be the most difficult to navigate. Today will be the day where we see if the most experienced riders and drivers can shine through.” says Rally Director Darren Skilton.
Results:
P
RDC