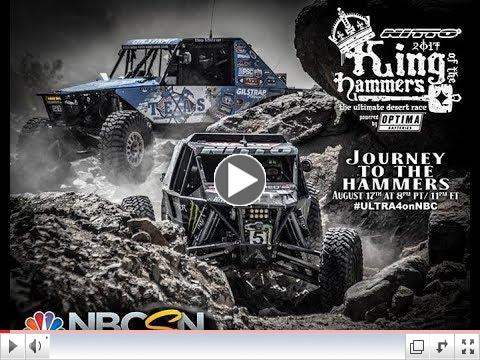 You don’t want to miss this. Tonight’s episode is a special 1 hour presentation covering the 2017 Nitto King of The Hammers Powered by Optima Batteries race. The hour long feature showcases the Unlimited 4400 class in the race the started it all. Expect plenty of never-before-seen footage; from heli shots to in-car cameras and exclusive interviews, experience #KOH2017 all over again from a new perspective.

Next week’s episode on August 24th will feature the start of the 2017 ULTRA4 Regional series.The regional races will air in the order they were raced, starting with the 212 Performance Gloves Vaquero 212 race in Sierra Blanca, TX, then the Holley EFi Clash at Cross Bar Ranch in Davis, OK, followed by the Metalcloak Stampede in Prairie City. Once these episodes have aired, there will be a hiatus until October 12th when the rest of the season will air Thursday nights in the same time slot.

Please be aware that NBC Sports is a single feed network; this means the show airs simultaneously across the US regardless of time zone. Episodes will air 8PM Pacific, 9PM Mountain, 10PM Central and 11PM Eastern. For those that missed last year’s episodes, re-runs will air each week following new episodes!