The racing included the traditional Crandon land rush start, but the actual racing would see the drivers compete on the one mile long “Short Track”. 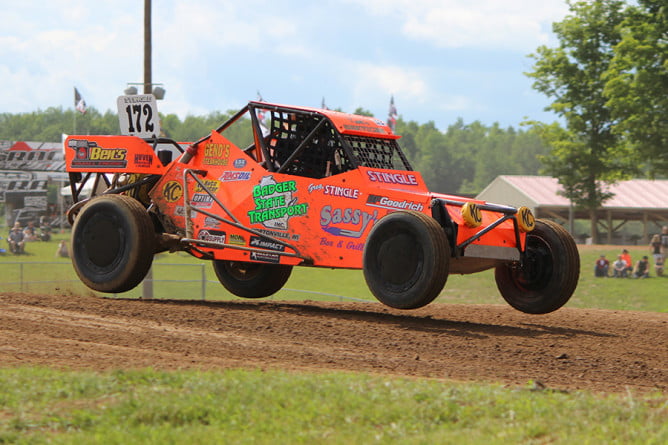 The first class up was Light Buggy. Reigning points champion Greg Stingle was the first competitor out of Potawatomi Turn One with Derek Tilkens right on his bumper. Quickly Tilkens put the pressure on the leader, but on lap four his transmission failed moving Jake Nelson up to second with a fast charging Tony Keepers in third. Behind Keepers another twenty Light Buggy racers were swapping positions throughout the ten-lap race. With Tilkens retired, Stingle cruised to the win, as Nelson held onto second and Keepers finished a very closed third.

Next up was the combined Class and Stock Truck race. The original grassroots racers run together on the track, but compete for separate prize money and contingency. The start had Dale Chestnut take the early Classix lead, but by the end of the first lap, a mechanical issue ended his day. Then the lead battle was between Crandon residents, Bill Wilson and Mike Mischler. Late in the race Mischler began to pressure Wilson when his Monte Carlo began to smoke. The overheated racer had to slow and eventually end his day early. This put Wilson at the top of the podium with a very happy Galen Gee in second.

The Stock Truck racers also had considerable attrition, but Diesel Shanak made it to the front of the pack and stayed their all race to take the win.

Next up was Super Buggy and Appleton, Wisconsin’s Rodney Van Epren led flag to flag. Behind Van Epren it was a family battle between father, Scott Schwalbe and son, Ryan Schwalbe. Scott held second place for much of the race as Ryan paced himself as he followed his dad. Then an ignition issue very late in the race stopped Scott putting Ryan second at the checkered flag.

The 1600 Buggy group, which always has plenty of wheel to wheel action, had the “Master”, Mark Steinhardt grab the early lead. It seemed like the rest of the class just didn’t have an answer for the reigning class champion. Las Vegan Bruce Fraley stayed close all race, but had to settle for second as Rob Kinner completed the podium in third place.

The second combined race of the day had Limited 4 and Formula 4×4 compete for one race purse, but separate points. The race began with Dan Baudoux getting the hole shot, but halfway through the opening lap, Al Drews drove his big block Chevy into the lead. Then three laps later Baudoux returned the favor and regained control of the race as he continued on to the win. Drews never gave up and was awarded with a hard fought second place. Just behind Drews, Jerry Conrad finished just ahead of Milan Mazenec for third and fourth respectively. 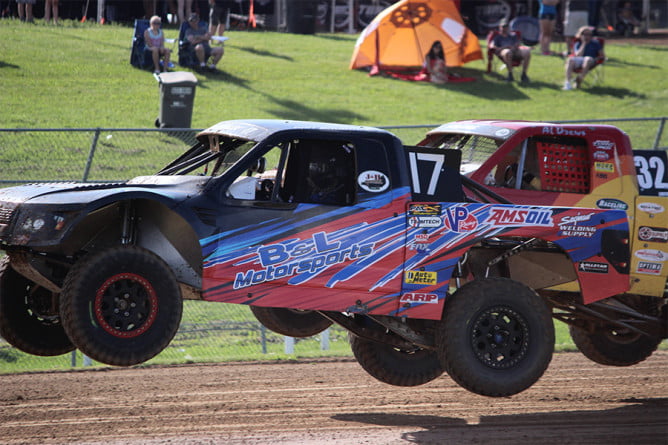 Next up was the always entertaining and competitive Super Stock Truck. The field of fifteen trucks saw Mitch Dorr lead the pack through Potawatomi Turn One. In fact he lead the entire race. Second place saw Danny Beauchamp push his truck to the limits, but couldn’t quite get close enough to make a serious charge for the lead. After all the dust cleared from all the pushing and shoving, Nick Byng completed the podium. 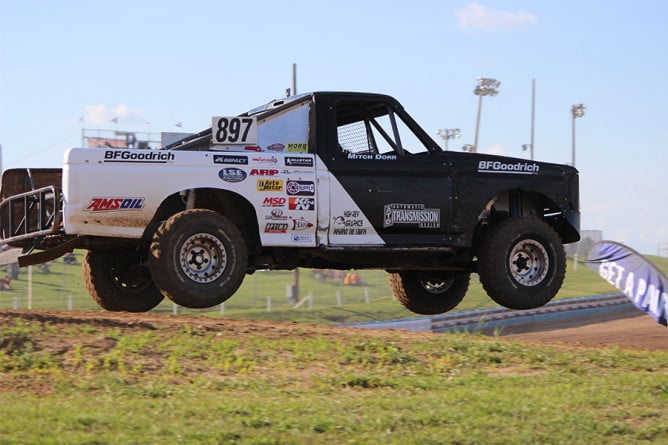 The final truck race of the day saw ten Super Truck drivers line up for the land rush start. The Super Truck division is basically a PRO-2 truck with a slightly limited powerplant. As the field came out of Turn One, Tim Nelson was in the lead. On lap two, Round 1 winner Eric Ruppel made a pass for the lead. Quickly Jerry Edgerton made a similar move to claim second place. Just past the midpoint of the race, Ruppel pulled off will a driveline issue putting Edgerton in the lead. As the laps wound sown Nelson begins to reel in Edgerton, but a last lap miscue ensured the win for Edgerton, as Nelson finishes second and Tim Hanegraaf comes home in third place. 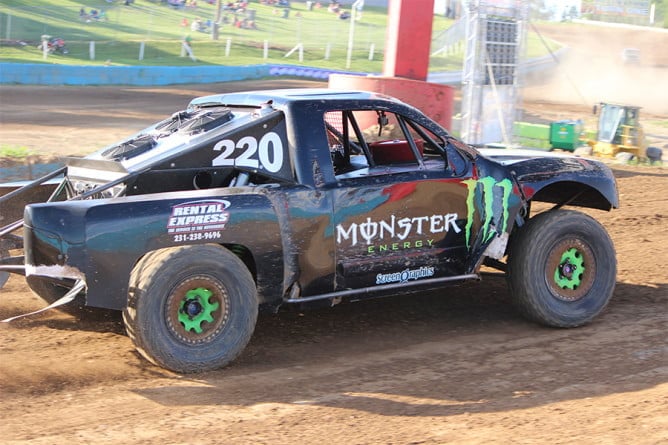 Saturday will see both Sportsman and PRO racers in action as the TORC “Keys to the Big House” begins its two days of short-course off-road racing. Look for additional event coverage tomorrow.