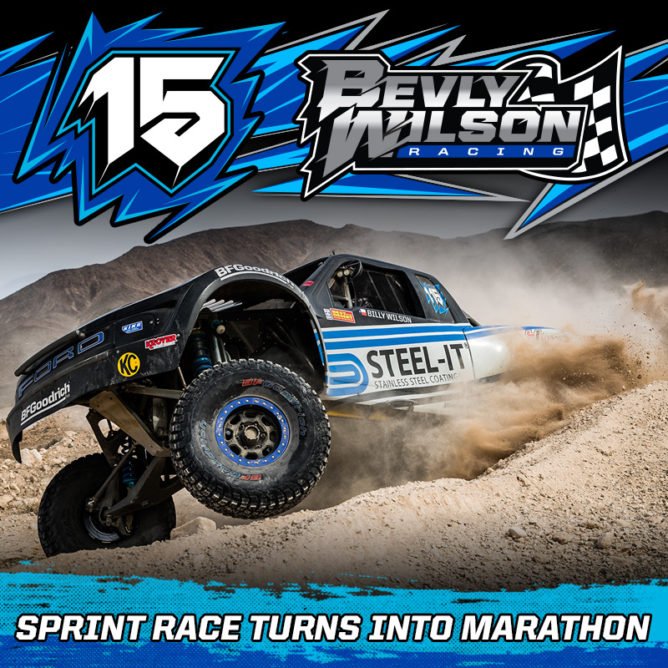 The Mint 400 race has a long history that dates back to 1968 when the race was conceived to promote the Mint hotel in downtown Las Vegas. Acknowledged as one of the toughest due to the rocky desert terrain, it was never known as a sprint race. Because of the level of competition that exists in the premiere Trophy Truck class, every race is now a sprint race. For Bevly Wilson Racing, the Mint turned from a sprint to a marathon.

From the drop of the green flag, it was on. Starting side by side with Terrible Herbst Motorsports, as the course went from two lanes to one, the two trucks were rubbing fenders; neither would give an inch. 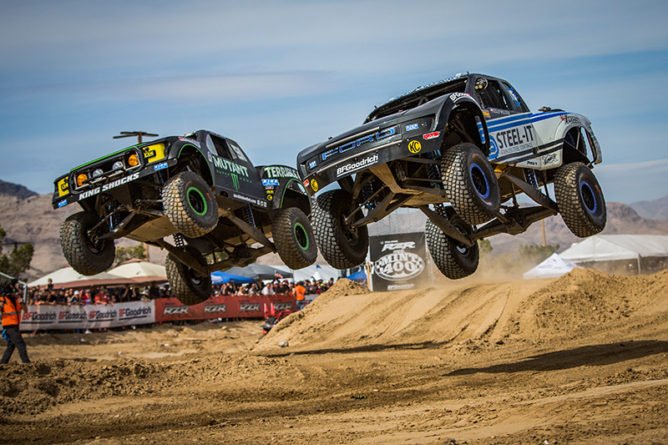 The first 10 miles of the course were especially rough after recent rains washed away all the dirt filling in the gaps between rocks. The result was a pile of boulders that vaguely resembled a trail. It was one of those rocks that caused their first issue. A huge rock struck the driveshaft, causing it to bend. They had to stop and mount the spare carried on the back of the truck. Once repaired and back underway, the truck was running strong on the same pace as the leaders.

The voltage gauge was fluctuating but they figured it was due to vibration and the contact with the Herbst truck off the start. The bolts holding the roof panel to the roll cage were sheared off in the incident. Once they got out on the lakebed and opened it up, the roof panel flew off; taking the GPS antennae with it. Ripping the wires out might have had something to do with the voltage issue. As they got to a remote section of the course, the truck suddenly died. The alternator had failed without warning and the batteries had drained. Since the Mint 400 is a no chase race, all work must be done in the pits. The driver and co-driver can work on the truck, but no outside assistance is allowed. 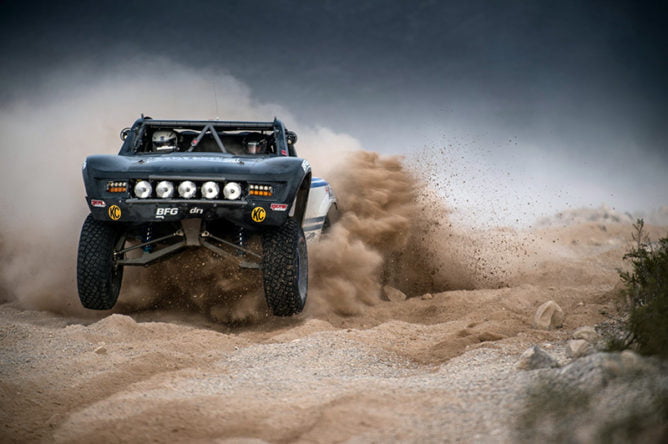 Unwilling to throw in the towel, Driver Billy Wilson and co-driver Byron Seed pulled the batteries out and started trekking to the main pit miles away. “I asked Byron how much energy he had because I was going to run,” said Billy, “We ran to the pit, got some fresh batteries and an alternator; then ran back to the truck. It was now dark out and we had another lap to run.” 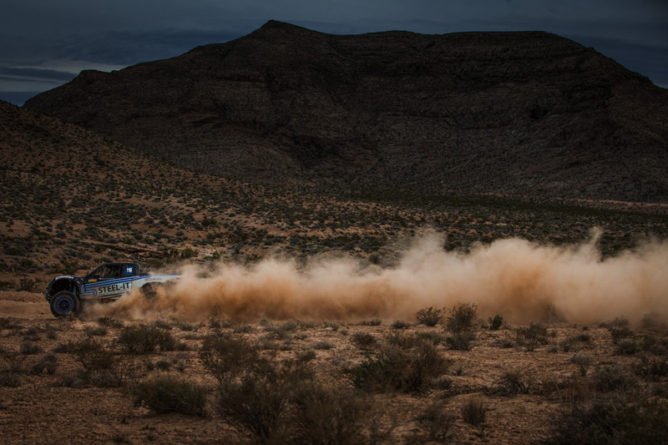 Now it was time to really test the truck. After two laps, the course had deteriorated badly. It was rougher than ever and there was no time to waste. All the time spent in the shop and the best support and components from STEEL-IT® Polyurethane Coating, BFGoodrich Tires, King Shocks, Jimco, Kroyer Racing Engines, KC Hilites, Impact, Maxima Racing Oils, FK Rod Ends, Trailready Beadlock Wheels, Bink Designs, and Rugged Radios, would be put to the test.

“I don’t like to push the truck that hard but it’s good to know we can if we have to,” said Billy, “The were soaking up the huge holes and our BFGoodrich Tires and Trailready beadlock wheels were crushing the rocks. The truck was working really well and we had great vision thanks to our KC Hilites led lighting. Despite the issues we had, it was really fun; we had a lot of friends and family with us. We had a great time at the Mint and are looking forward to our next race, the San Felipe 250. We have some maintenance to do on the truck but thanks to the STEEL-IT® Polyurethane coating on our chassis and suspension components, inspection will be quick and we don’t have to waste time dealing with rust or corrosion.” 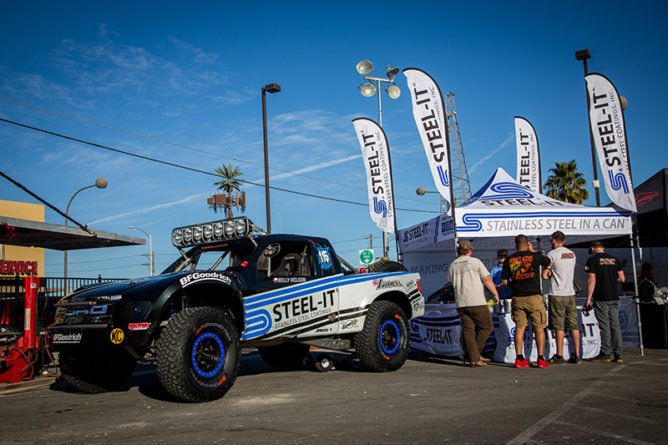 The San Felipe 250 is the first SCORE International series race and takes place in San Felipe, Baja California, Mexico on March 30 – April 2nd. The team hopes to take their second San Felipe win in a row.