Evidently, You Can Put a Price on Victory

A challenge is meant to bring out the best in someone. Or uncover their worst. To see a difficult situation through to the end, assess the damage, then move onto the next as a better person (theoretically). At the end of this most ultimate of challenges, were so many more successes than failures. Lessons learned, and goals achieved. As the curtains closed on the 2019 Dakar Rally, Toby finally gets his kiss. Laia gives Toby a long-overdue haircut. Nassir won Dakar for a third time. Two Americans landed in the Top Five among different classes. And everyone had one hell of a race. So what happened at the crescendo? 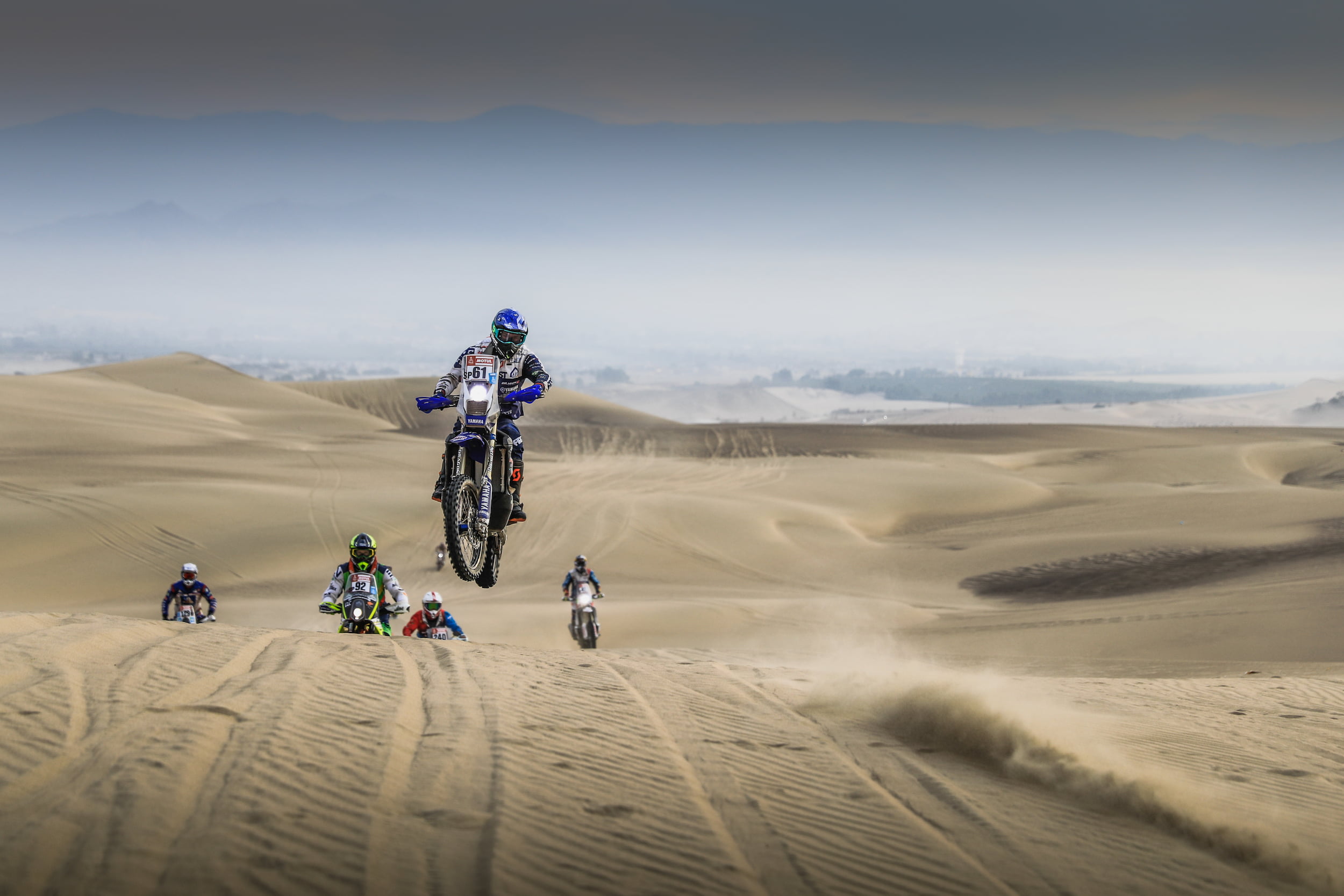 The shortest of the specials was not meant to be easy. Harkening back to the beginning, the last stage started like the first: in reverse order. With cars, trucks and Side-by-Sides sprinkled intermittently between bikes and quads. It made for a frenzied event as racers contending for the podium pushed and shoved past slower competitors – adding a swirl of fesh-fesh and urgency to the already numerous dangers. Launching last off the line, top pilots, from two-wheeled to four, small to massive, were meant to weave around the day’s back-of-the-pack, causing chaos we can maybe assume the Dakar organization had foreseen. Just imagine: you’re riding a rally bike as fast as possible in a sand storm, when a race-spec dump truck is hurdling itself in your direction and planning to pass. Whether you like it or not.

“It’s very crazy to sit here and say that we won the Dakar rally with no stage victories until today. It’s really crazy. I’m over the moon, I’m so damned stoked. It’s been a long 10 days. Now I’ll just wait and see what damage I’ve done to my wrist. At the end of the day, the pain and torture has been worth it. I thought I would only be able to do two stages and then pull out and that would have been me done, but the support from everyone back home in Australia and then having some things go my way and a bit of luck, it just worked out in the end. It’s been an unreal rally.” – 2019 Dakar Rally Winner, Toby Price #3, Red Bull KTM Factory Team, AUS

But with little withdrawal today, most of the racers seemed to have overcome the obstacles set forth, managing the tremendous task of completing the Dakar Rally… In-tact. An unsurprising win came from KTM for the 18th year in a row. Australia is likely drunk with pride (and Fosters?) celebrating their good ol’ boy Toby Price (#3) for his second title after only three years. It’s not news Price had not only completed but won this rally with an injured wrist – having broken it a few weeks prior – making his winning smooch from Laia Sanz (#17) all the more sweet. Though, she won her side of the bet too, nabbing a place among fifteen best bikes at Dakar. (Farewell, mullet.) But it is respected rival, Pablo Quintanilla (#6) who, like Toby, rode on with an injury. Crashing on this final stage, breaking his ankle, then hopping back on his bike to 4th overall at the finish, Quintanilla endured what the average guy would consider extreme pain with Herculean strength.

Every Dakar is just one step closer to victory for the United States. This year saw outstanding performances, like from Californian Ricky Brabec (#15) when he achieved the first overall lead by an American since Robby Gordon (#316) in 2005. But then, his record expanded with two overall leads in a row, plus he is the first patriot to lead the General Classification three times in one event. Rookie Skyler Howes (#73) made his way to the Top Ten by Special Stage Five putting neck ‘n neck with the “big boys” (and Laia). Although, during the liaison an unfortunate accident out of his control eventually led to his withdrawal. In Cars, two of the three vehicles with Robby Gordon’s Team Speed had more of the same issues they’ve experienced throughout the competition. One of the Textron’s breaking down and the other coming to the rescue – making their exit of the desert two hours longer than expected. But ironically, the car out of contention driven by Cole Potts with navigator Max Eddy Jr. (#346) had a smooth, easy day at last having much less of the headaches they too had been contending with. But as a whole, the six members – Robby, his co-pilot, Kellon Walch, Blade Hildebrand, co-pilot Bill Conger (#367) and the from Auto 346 fought tooth and nail to get their vessels to Lima, to roll over the podium one last time.

Grassroots riders Garrett Poucher (#71) and Nathan Rafferty (#104) have taken positions they should be proud of. Rafferty pushed himself, nearing the point of tears at one point, which he graciously documented on his social media channels. But in the end, it paid off, as did what many capable riders can’t do: finish the Dakar. And he did it in 50th place, cutting starting position from Day 1 nearly in half. Garrett, a late starter to the off-road racing scene who’s been dominating enduro and local rallies for such a short period, has shown viewers of the rally he’s tough as nails. Featured in the media for as many epic fails as epic successes, he has blown us away with a 92-wrung move up the ladder ranking in the high 20’s early on. Falling back a bit during the marathon stage, Poucher luckily kept himself together through some terrific crashes, pushing himself further to conclude this infamous event at 32nd. Casey Currie did precisely what he’d promised from the start, making a name for himself as the first American to reach the top five seeds in the Side-by-Side class during his inaugural year. And at fourth overall, he is the highest ranked US finisher in 2019!

Last of the Yanks, but certainly not least, an ever-humble Andrew Short (#29) comes home from Peru in an incredible 5thposition. And he sums up his experience with gratitude and admiration: “Ended up 5th overall here at the Dakar Rally! Stoked. This crew behind me are amazing at what they do… My heart goes out to my teammate Quintanilla who left everything on the table today going for the win… Congrats to the Legend, Toby Price. He is simply amazing on a dirt bike. This race is special, and I hope one day I get the opportunity to do it again…For ten days, you basically check out of society as the race consumes you, but I can’t wait to look back at some of the moments.”

For 41 years, the Dakar Rally has dazzled the world. An untouchable realm for the elite, and hearty – the pioneers of motorsport. Taking the adventurous nature of navigation, merging it with the thrill of competition and setting the scene at first in Africa and now in ‘America del Sur.’ No longer an event, Dakar is a lifestyle, shared by the many archetypes who fill its mobile cities for 15 days or so. A scene straight out of Mad Max with overbuilt dump trucks rolling down a network of dusty lawless roadways at one moment. Then storming the dunes like mammoths running from a pack of sabretooth tigers in another. It’s a dream. A long-fought achievement, for those men and women who’ve battled this most notorious of races. January 17th signified the finale of such punishing pursuits, and then more many, the start of a very long year of waiting… Until the next opportunity comes, to dare Dakar. 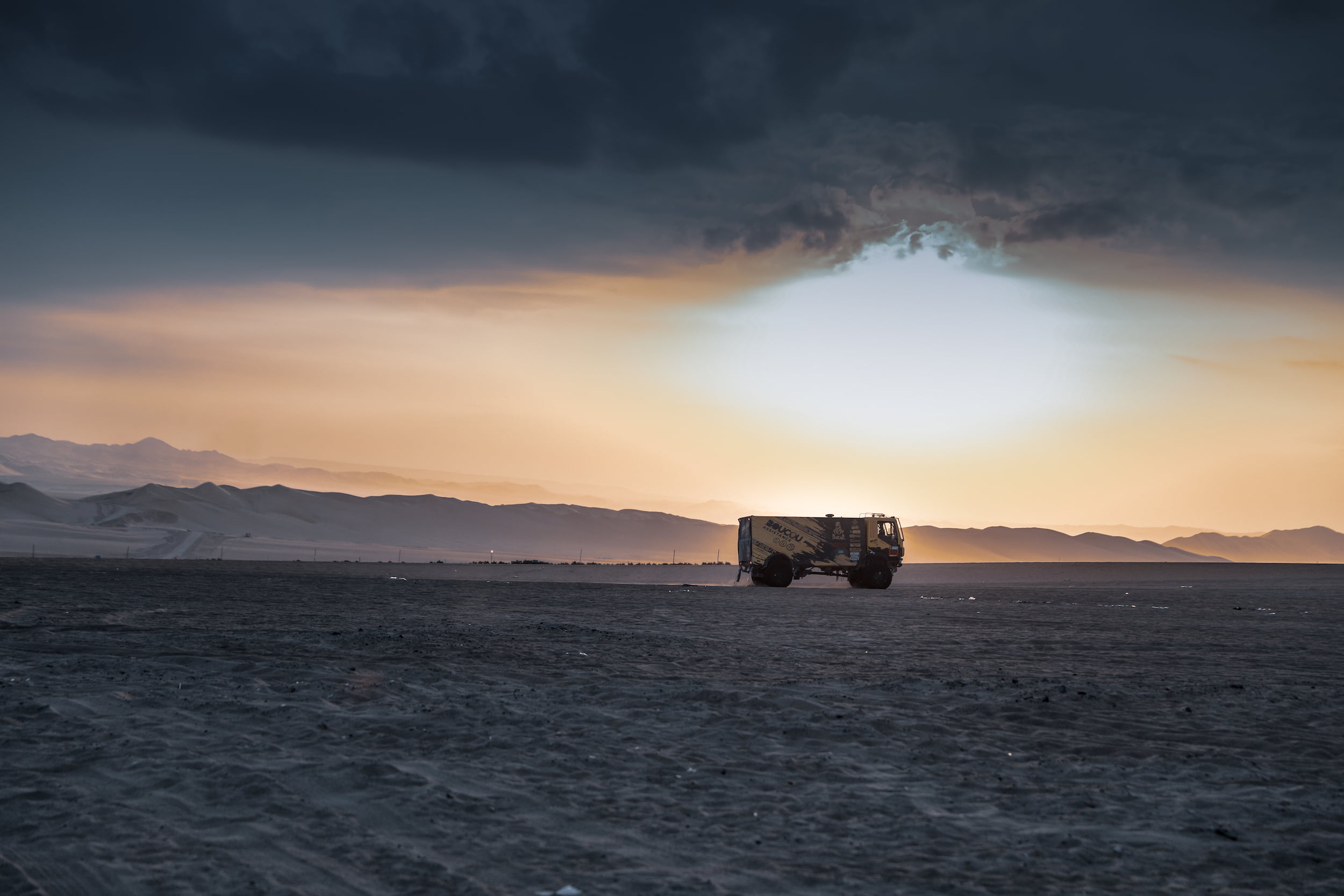 Ø Three years after becoming the first Australian winner of the Dakar, Toby Price has triumphed again, fighting against the increasing pain caused by a scaphoid injury that was not quite healed before the start of the rally. (Statement provided by the ASO.)

Ø Carlos Sainz has managed to complete what was a difficult rally for him with a stage victory. The Mini has beaten Sébastien Loeb by only 42 seconds at the finishing line. Cyril Despres is 3rd, 2’31 behind the Spaniard. (Statement provided by the ASO.)

Ø Francisco “Chaleco” López Contardo has won his first Dakar on his first participation in the SxS category. Although he finished third in the last special, the Chilean has also won 4 stages and has completed the rally with a lead of just over Gerard Farrés and Reinaldo Varela in the general standings. (Statement provided by the ASO.)

Ø Unsurprisingly, in light of the lead he had going into the last stage, Nasser Al-Attiyah won his third Dakar in Pisco. The Qatari was Twelfth to finish 9’ behind Carlos Sainz at the finish of the last special and offers Toyota its first victory in the car category. “It’s fantastic. No mistakes during the entire rally. It was a very, very difficult rally for everybody. The good thing was that from day three we were leading and we built on our time everyday until we came to the last day with a big, big lead. I’m really happy – thanks to Toyota, thanks to BF Goodrich tyres, all the sponsors, Qatar, Red Bull. It made everything happen right for this year. I’m happy for Toyota because it’s the first time in the history of Toyota that they won the Dakar, this is fantastic. [On being the favorite] It’s like what I always say, we respect all the other drivers. All the drivers are really very strong. Everybody wants to win the Dakar. But we felt when we came that in Peru, a 100% Peru rally, with no other country, there would be a lot of sand dunes, so we could do what we know we’re good at. We we’re leading from day three and, yeah, I’m really quite happy. [On avoiding mistakes that others made] This is the adventure of the rally. The rally is not easy and if you push every day, sure, you will have a problem with the car. I’m really happy to win this race with Toyota.” (Statement provided by the ASO.)

Ø Rankings of Americans after SS10