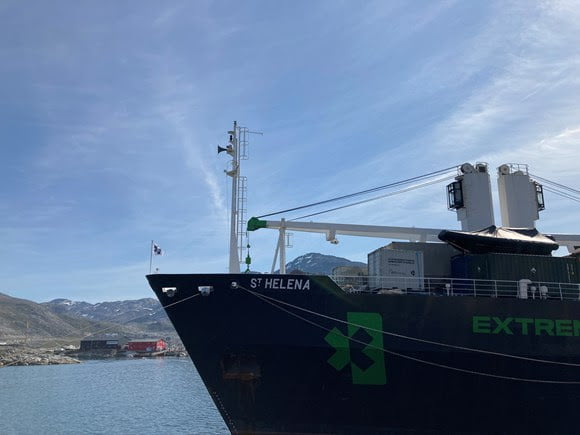 2 August 2021, London: Extreme E’s floating centrepiece, the St. Helena, has arrived in Kangerlussuaq, Greenland, with just under one month to go until its Arctic X Prix – the first ever international motorsport event to be staged in the country.

The St. Helena departed Dakar, Senegal, following the Ocean X Prix in mid-June and travelled across the North Atlantic Ocean to reach Lisbon, Portugal, stopping there for a few weeks to collect provisions and change crew. During the journey the team onboard were treated to stunning sunsets and even dolphins swimming alongside the ship.

Upon departure from Lisbon in mid-July, heading north for the first time in the series’ global voyage, the dolphins joined again as the St. Helena left the bay straight into the vast Atlantic Ocean, providing a calm fort for the first leg. However winds eventually picked up and fog set in along with rain and dropping temperatures, meaning poor visibility. Watchmen on-duty were doubled to deal with the increased challenges, with regular sounding of the fog horn as per regulations. The crew witnessed the spectacle of whales travelling both north and south either side of the Ship during this part of the voyage.

Due to the poor weather, the Ship had to continue on the Rhumb line – an imaginary line on the earth’s surface used to plot a ship’s course – rather than the Great Circle Route – the shortest marine route. The crew also had to hold iceberg navigational meetings, seeing their first one – named #52 on the radar – on 28 July in the Labrador Sea. A real contrast of experiences compared to the previous warm conditions around the Middle East and West Coast of Africa.

Upon arriving in Greenland’s capital Nuuk on 29 July the crew had changed time zones three times, before eventually settling on West Greenland Summer Time. A short stop provided the opportunity to collect further provisions and crew before heading to Kangerlussuaq – the location of the Ocean X Prix – being greeted by a herd of seals as it arrived into its home port for the coming weeks.

Extreme E is racing in Greenland as its melting ice cap epitomises the challenges and severity of the global climate crisis. Just last week according to the Denmark Meteorological Institute, Greenland lost 8.5 billion tonnes of surface mass, enough to cover the entire state of Florida in two inches of water. The series will use its sporting platform to educate its audiences on these issues and the solutions we can all be part of.

Alejandro Agag, CEO and Founder of Extreme E, said: “It is fantastic to see the St. Helena arriving in Kangerlussuaq, and it really marks the official countdown to the Arctic X Prix. Having visited Greenland as part of our early planning, I’ve been to the ice cap and have seen the flowing melt water first-hand. It is a truly sobering place to be when you understand the scale of the situation and really bought home the severity of the global climate emergency to me, and the race against time that we are all part of.

“I hope by being here and using our global media platform, we can show the world not only the effects of climate change, but also educate on the solutions, through the expert knowledge of our Scientific Committee, and also through our Legacy Programme with UNICEF in Greenland and the community of Kangerlussuaq.”

Over the coming days and weeks, the freight of the St Helena, which includes all the team’s electric ODYSSEY 21 race cars, the AFC hydrogen fuel cell which powers the vehicles using green hydrogen, and all paddock infrastructure and team engineering equipment, will be unloaded and set up at the race site.

As the first ever motorsport event to take place in the country, planning has not been easy due to Greenland’s unique, remote and extreme nature. The team has been working hard to ensure the infrastructure is in place in the most sustainable way possible from logistics to power to toilets, all with the aim to not only race without a trace, but deliver another weekend of world-class racing.

While Rosberg X Racing’s Molly Taylor and Johan Kristoffersson have taken racing honours at both the Desert X Prix and Ocean X Prix in Saudi Arabia and Senegal respectively, there has been some close racing which will be no different in Greenland. The course in part will run across what was once the mighty Russell Glacier, but which has now sadly receded and is rock salt, sediment-based terrain left behind by the melted glacier. World-class drivers including the likes of Sebastien Loeb, Timmy Hansen, Carlos Sainz Snr., Catie Munnings, Jutta Kleinschmidt and Laia Sanz will face a variety of terrains putting their skills to the test.

Hjörtur Smárason, Visit Greenland’s Managing Director, said: “Greenland is very proud to host such a high profile event. Climate change happens twice as fast in the Arctic with temperature rise already passing well over two degrees. The impact is decades ahead of the rest of the world, which is very visible here at Russell Glacier.

“Greenlanders are used to being at the forefront when it comes to adapting to extreme climate, but this is a challenge on a new level that needs a global response. Extreme E is a fantastic way to showcase the challenge and at the same time highlight our ability to adapt, to innovate and to act fast. Greenland is already doing it and we hope this event inspires the world to fight climate change with the same enthusiasm and determination as we see in the drivers and engineers of Extreme E.”

But it isn’t just the drivers that will be the stars of the show. Extreme E Scientific Committee members: Professors Peter Wadhams, Carlos Duarte and Richard Washington along with local experts, will also be in Greenland conducting their own research, taking drivers on a tour of the ice cap as well as hosting a variety of workshops focussed on the tipping point in climate change which will be made available following the X Prix. In addition, the championship’s first scientific project in collaboration with Founding Scientific Partner Enel Foundation will join the St. Helena – more details to be revealed in due course.

Alongside the scientific research, Extreme E has also been supporting UNICEF to create an educational programme. The programme aims to empower young changemakers – around 3,600 young people – in the country by reimagining climate education in Greenland, helping children understand and address the climate related issues which are putting them, and future generations at risk.

Maliina Abelsen, Head of Programmes, UNICEF Greenland said: “We are grateful to have received Extreme E’s support, to build on our existing work in promoting and protecting the rights of children who are the least responsible for climate change, yet they bear the greatest burden of its impact. With thanks to the educational resources we created, children and young people in Greenland will have an enhanced foundation of and involvement in the environmental issues that affect them.”

The legacy efforts don’t end there, as Extreme E is also leaving behind compostable toilets, solar panels, electric go-karts, and medical supplies and training to support the local community. More details to follow on this as the Arctic X Prix draws closer.

In a bid to keep Extreme E’s carbon footprint to a minimum, as well as the remote nature of its events, X Prix events are not open to spectators. Instead, fans are invited to watch through a host of global broadcasters including ITV, Sky Sports, BT Sport and BBC digital channels in the UK, FOX Sports in the USA, Eurosport in Europe, plus many more available to view here. Followers can also get involved via the championship’s innovative FanWorld concept.