Capitalizing on what was once known as Mickey Thompson’s Off-Road Racing, Robby Gordon’s Stadium SUPER Trucks will feature high-flying off-road action motorsports fans have been asking for. The entire championship season will be broadcasted on NBC and NBC Sports Network, with the series awarding $500,000 to the Champion driver of Stadium SUPER Trucks.

“It has always been my dream to bring back stadium racing to the masses. I started my career winning a championship in Mickey’s series and now I want to revive his vision and bring back what the motorsports world needs. NBC Sports understands what kind of excitement and value our show will exhibit. This will be extreme wheel-to-wheel, door-to-door, roof-to-dirt racing action for all ages,” said Robby Gordon, President of Stadium SUPER Trucks. 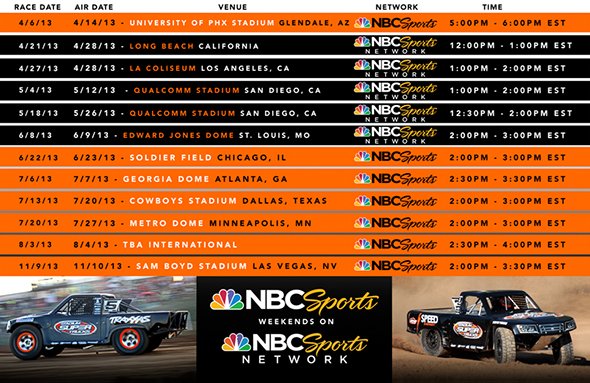 D
Kilian Hamlin
This has been a long time coming!!! I can't wait to watch this series.
I remember watching this As a kid I'm trying to get into off-road racing now and I would love to be able to do this type of Racing. I wish I had the opportunity to help grow this sport again A's race in it.can't wait.
HELL YEAH ROBBY!!! can't wait to see this...F NASCAR, Offroad is were it's at baby!!!
awesome RG great work cant wait to go SST PHX 2013
Nice .... I sure hope the rumors I am hearing about the Pro Quads being a part of this series is true because if it is we are ALL IN !!!