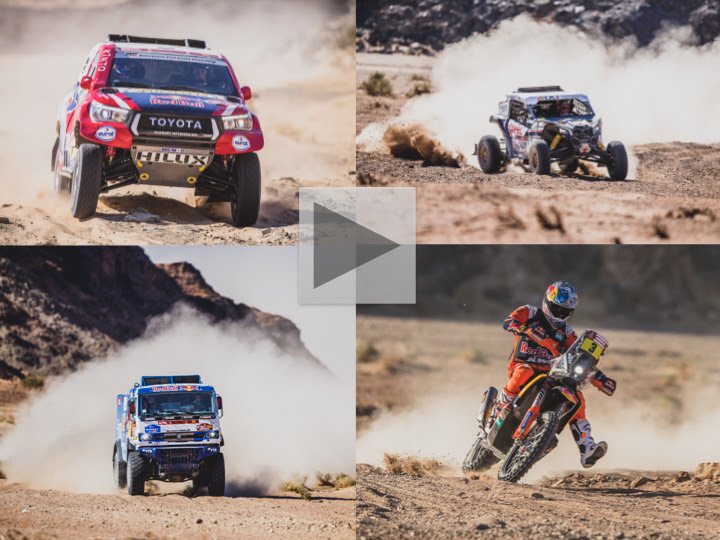 As the 2020 Dakar Rally moved up Saudi Arabia’s Red Sea coastline, the pace was increasing out in the dunes. Stage 2 brought the remaining competitors a further 400 kilometres north as they left behind Al Wajh and sped towards Neom.

Defending bike race champion Toby Price (AUS) was first off today on account of yesterday’s stage win. The 367-kilometre stage was littered with navigational pitfalls and as a result Price conceded time not only to his fellow Red Bull KTM Factory Team riders, but also to rivals spread throughout the bivouac.

It was Ross Branch (BWA) who arrived in Neom with the quickest time of all the bikers. The ‘Kalahari Ferrari’ was followed in by 2017 Dakar champion Sam Sunderland (GBR) who now leads the general classification. Sunderland’s KTM Factory team-mates Price, Matthias Walkner (AUT) and Luciano Benavides (ARG) all join him in the overall Top 10.

“It was another long day today with lots of variance in the terrain.” – Sam Sunderland

Stage 2 saw the retirement of Daniel Nosiglia (BOL) as the Honda rider fell and injured himself 141 kilometres into the special. Nosiglia was hoping to improve on last year’s 11th place finish and will surely be back to test himself against the Dakar again in the near future.

There’s an extra challenge for the top bikers left in the rally at the end of Stage 2. A ‘Super Marathon Stage’ rule is in place that restricts elite riders to just 10 minutes of maintenance work at the end of the day.

Local race fans were given plenty to cheer in the car race as Yazeed Al Rajhi (SAU) led Stage 2 for much of the day. However, when Al Rajhi lost his way near the end of the stage there was a former Dakar champion ready to pounce. 2009 Dakar winner Giniel De Villiers (ZAF) avoided mistakes all day to set the day’s quickest time in the car race.

“Things went a lot better for us today than they did yesterday, that’s for sure. With this result we’re back in the game.” – Giniel De Villiers

There are a host of Dakar winners hot on the heels of new overnight leader Orlando Terranova (ARG). De Villiers, Carlos Sainz (ESP), Stéphane Peterhansel (FRA) and Nasser Al-Attiyah (QAT) are all well placed to attack the front of the race tomorrow.

The only defending Dakar champion who is currently leading their category at the Dakar is Chaleco Lopez (CHI) in the side-by-side race. Alongside co-driver Juan Pablo Latrach Vinagre (CHI) the reigning SxS champ was able make big gains in the final stretch of the stage.

“My co-driver did a great job finding the last waypoint because it was not easy. This is where we were able to improve our result a lot.” – Chaleco Lopez

The learning curve continues for Red Bull Off-Road Team USA. Mitch Guthrie Jr. (USA) continues to impress on his Dakar debut as he set the sixth fastest time in the SxS race and lies sixth overall. Meanwhile, Guthrie Jr.’s team-mate Blade Hildebrand (USA) suffered gearbox problems on his OT3 during the stage and was at a standstill at the 80-kilometre mark for much of the day.

The OT3 containing the Red Bull Off-Road Team USA coaching team of Cyril Despres (FRA) and Mike Horn (SUI) enjoyed a smoother ride than yesterday and posted a time inside the SxS Top 10 on Stage 2.

“Mike (Horn) was on fire. Racing alongside him was like being on a really huge horse that just wanted to go, go, go.” – Cyril Despres

It was a first Dakar stage win in Saudi for Siarhei Viazovich (BLR) in his Maz truck as he attempts to take the fight to Team Kamaz Master. Despite missing out on the stage win, all Kamaz race trucks finished inside the Top 6. Dmitry Sotnikov (RUS) was second on the stage and is now the highest placed Kamaz trucker. Sotnikov is second overall and less than two minutes behind Viazovich.

“At this Dakar I think the navigators must stay focused on the roadbook until the end of each stage.” – Dmitry Sotnikov

The tussle in the quad category continued between Ignacio Casale (CHI) and Rafal Sonik (POL). It was Casale who had the upper hand for the second consecutive day as the two-time Dakar winner increased his overall lead to over nine minutes.

Tomorrow sends the Dakar convoy on a loop stage that will start and finish at the bivouac in Neom. The majority of the 414-kilometre special stage will be over sandy ground as the rally continues to acquaint itself with the deserts of Saudi Arabia.

Toby Price: “I made a little navigation mistake at 60 kilometres and Ricky (Brabec) who was behind me did the same thing. Other than that it was all pretty good. It’s heavy going. It’s so hard to try and process all the notes quickly. There’s been some changes to the roadbook that we’re all having to wrap our heads around. You really need to stay focused out there. We’ve got 10 days to catch up anything we lost today.”

Sam Sunderland: “It’s a Super Marathon Stage so we have to try and take care of the bike the best we can. I was using the rear brake quite a lot today so I’ve taken the chance to quickly change the rear pads. It was another long day today with lots of variance in the terrain. I’m just doing my best to maintain a steady rhythm throughout.”

Luciano Benavides: “I got a Top 5 time on the stage. I’m really happy with my rhythm here in Saudi. I enjoyed today’s stage a lot, just one part where I almost crashed made me worry. Luckily I avoided the crash so I’m OK and so is the bike.”

Matthias Walkner: “At the beginning it looked like it would be a really great day. The navigation was tough and for more than 100 kilometres I was opening the piste myself after I caught the guys in front. I was happy with my speed and navigation. Later some other riders caught me and then it got difficult because there was lots of dust.”

Giniel De Villiers: “Things went a lot better for us today than they did yesterday, that’s for sure. We tried to push as hard as we could in the morning. The stage wasn’t as difficult as yesterday, but navigational wise it was still very, very tricky. Alex (Haro, co-driver) did a really good job. With this result we’re back in the game.”

Stéphane Peterhansel: “Today was a strange day for us. At times we felt like we were the kings out there, on the right road and everything going good. Then a few kilometres later we’re lost and we need to turn back. The biggest mistake we made cost us about 10 minutes. I also had a problem with my steering wheel about five kilometres from the end of the stage.”

Nasser Al-Attiyah: “There was one place where all Top 5 cars were lost, navigation is really difficult at this rally. After this we had to relax our pace and proceed with a little caution. When we could we tried to push, but unluckily for us we had another three flat tyres out there. The race is really difficult, but this is how it should be at the Dakar.”

Carlos Sainz: “These first two days have been very challenging. Two very difficult Dakar stages. It has been up and down for us the whole way so far. We had done an OK stage today, but then close to the finish we couldn’t find our way. We’re still in touch with the lead so we go into tomorrow’s stage with lots of motivation to do well.”

Chaleco Lopez: “We got faster in the second part of the special stage. My co-driver did a great job in finding the last waypoint because it was not easy. This is where we were able to improve our result a lot.”

Cyril Despres: “The stage started really well for us. Mike (Horn) was on fire. Racing alongside him was like being on a really huge horse that just wanted to go, go, go. Unfortunately we hit a rock at one point and the system to change the wheel was completely destroyed. We spent six minutes repairing this and then after that we could lift the car. We tried to fix the wheel, but we couldn’t get it totally fixed.”

Dmitry Sotnikov: “Overtaking was very difficult today because it was very dusty. You must be careful not to get too close to other competitors on the stage because so much dust made visibility very low. Lots of people got lost at different points of the stage, navigation was a challenge all day. At this Dakar I think the navigators must stay focused on the roadbook until the end of each stage.”

Ignacio Casale: “It was another good stage for me. It was a little slower than yesterday, but still really tough. I was opening the way for the quads and there were plenty of challenges in the roadbook. I’m happy with how things are going so far. There’s still a long way to go.”