Stage 3 of the 2019 Dakar Rally proved to be a brutal one for many teams, some ending their chances for an overall win and some ending their rally all together. While not a particularly long special stage, the challenging terrain was just that. 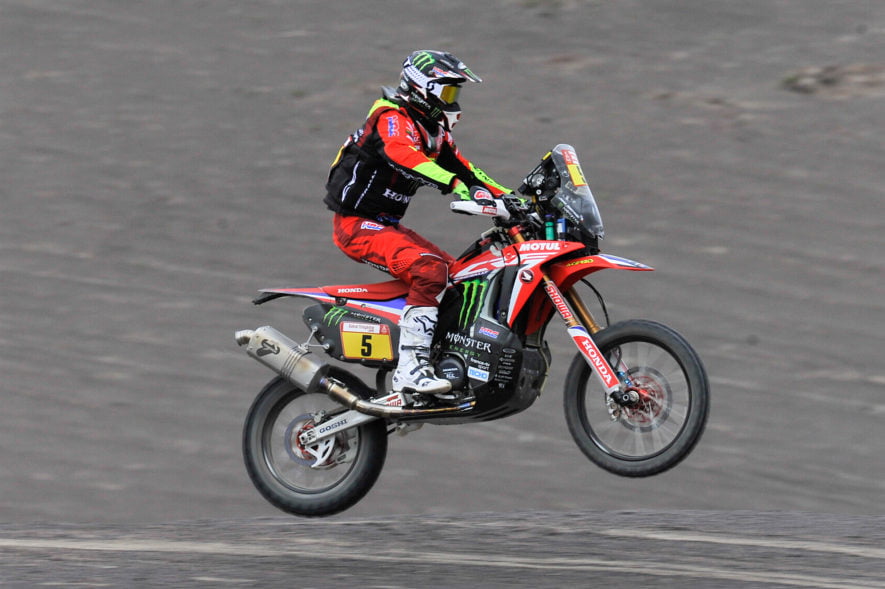 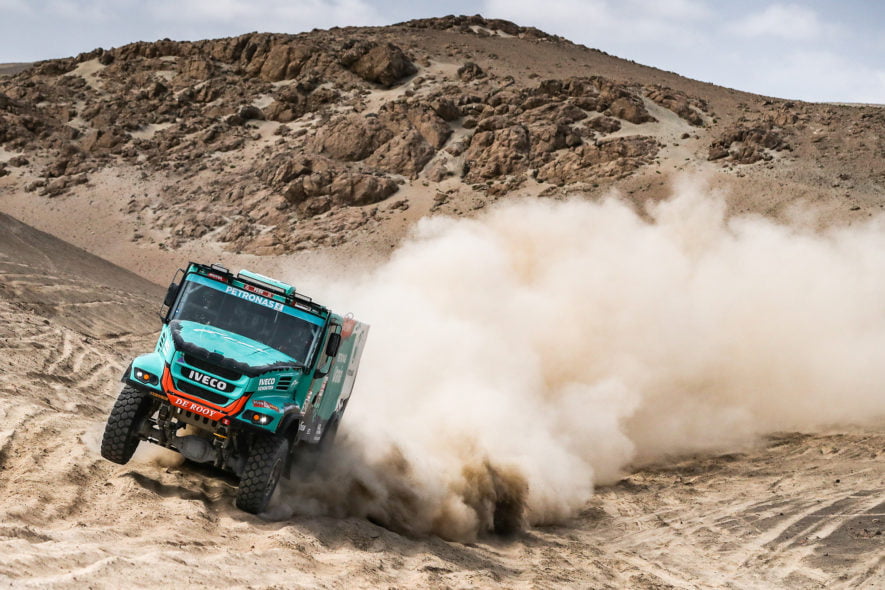 The most difficult section seemed to be before the halfway point where fog in the mountains caused bikes and teams to have low visibility, sometimes as little as 5 feet in front of them. Trying to navigate off a road book in those conditions can be dangerous as Honda rider Joan Barreda learned all to well. While traversing a ridgeline in the fog he ended up going down a ravine that he was unable to get back up ending his rally. Luckily Ricky Brabec and eventual stage winner Xavier de Soultrait were able to stop in time and maneuver around the danger and move on. 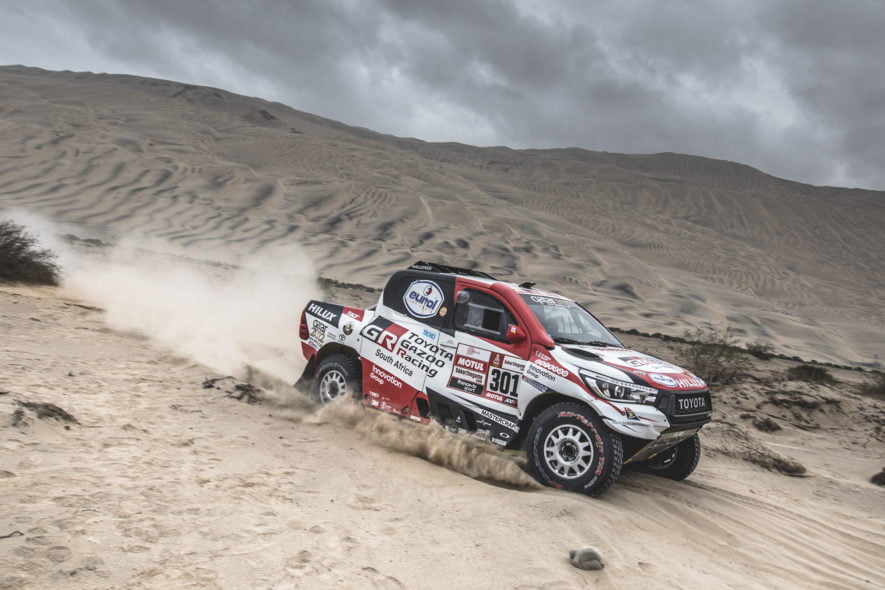 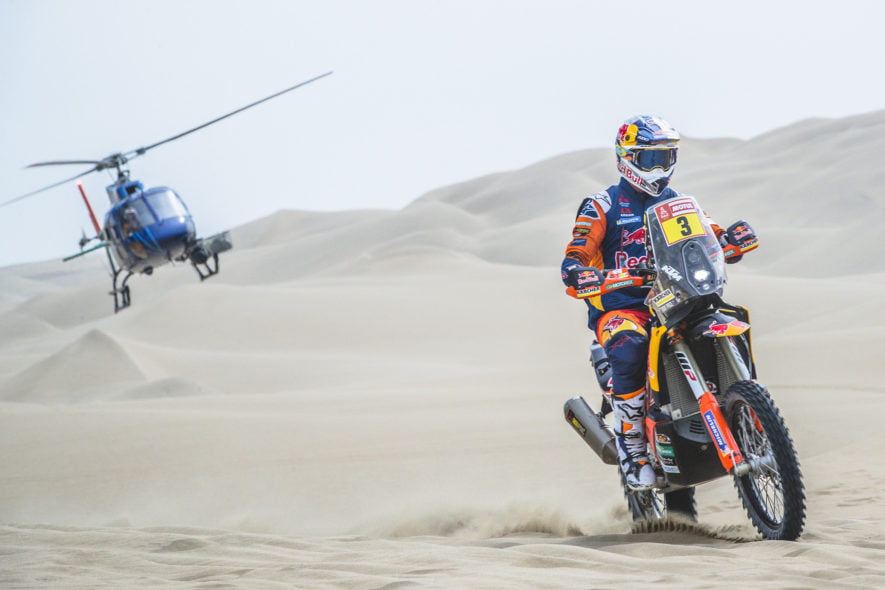 Many teams complained at the finish line about possible mistakes in the road book causing delays as well. There was also some drama as roadbooks were taken from many of the top teams to see if they were breaking the rules and using MapMen to help with navigation (check out our forum discussion in Stage 3 for more info) 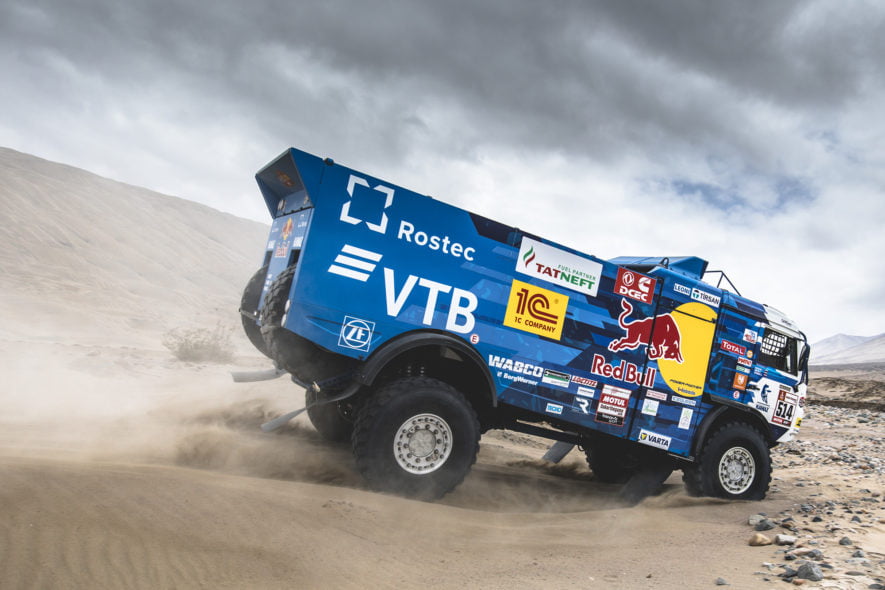 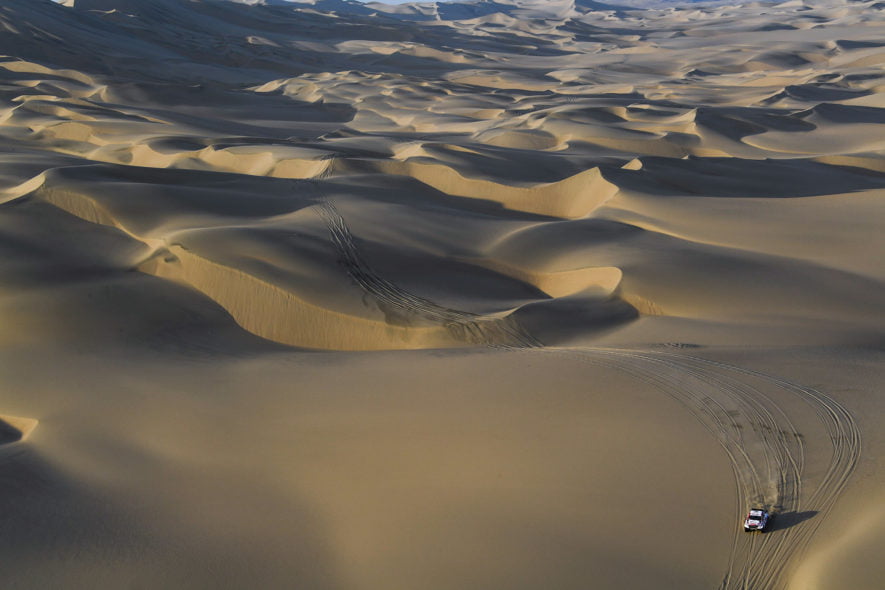 Some quick notes regarding the toughest stage of the rally up till this point.

-Mr. Dakar, Stephane Peterhansel won his 75 Dakar stage win today proving that the nickname is spot on. Winning todays stage by over 3 minutes on Nasser, Penterhansel now sits third overall just 7 minutes away. Starting 17th on todays stage he had the advantage of seeing many other drivers tracks to see where to go. By WP1 he was already third on time and WP2 moved up to second. By WP3 he was in the lead and never let it go the rest of the stage.
-Last years winner Carlos Sainz was moving at a good pace up to WP1 but somewhere before the next waypoint badly damaged a front wheel giving him hours of downtime while repairing it. Eventually they got back up and running but after finishing the stage 4 hours and 20 minutes behind his hopes of a back to back overall win our gone.
-Nasser Al-Attiyah is now your overall leader of the rally after finishing second today behind Peterhansel. Nasser is always a threat and will have the chance to put more time on the field as traditionally the person to start the stage usually sets a slower pace since they are blazing the trail.
-Sébastien Loeb was first off the line after winning Stage 2 but with some navigating issues finished 40 mins back from his old teammate. As it sits now Loeb is about 37 minutes behind the overall leader, and mathematically he is not out of a overall win, reality is that it would take the stars to aline for him to get his first Dakar Overall win. 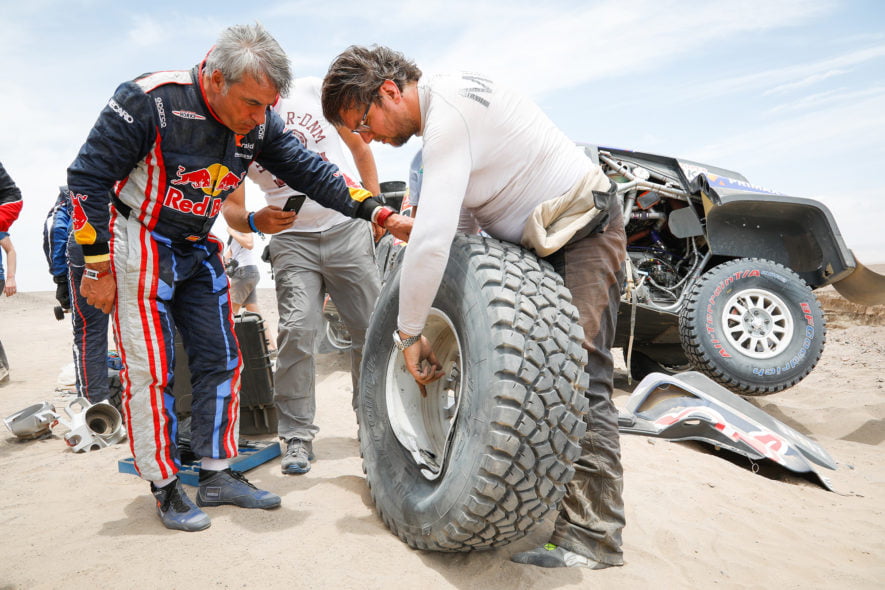 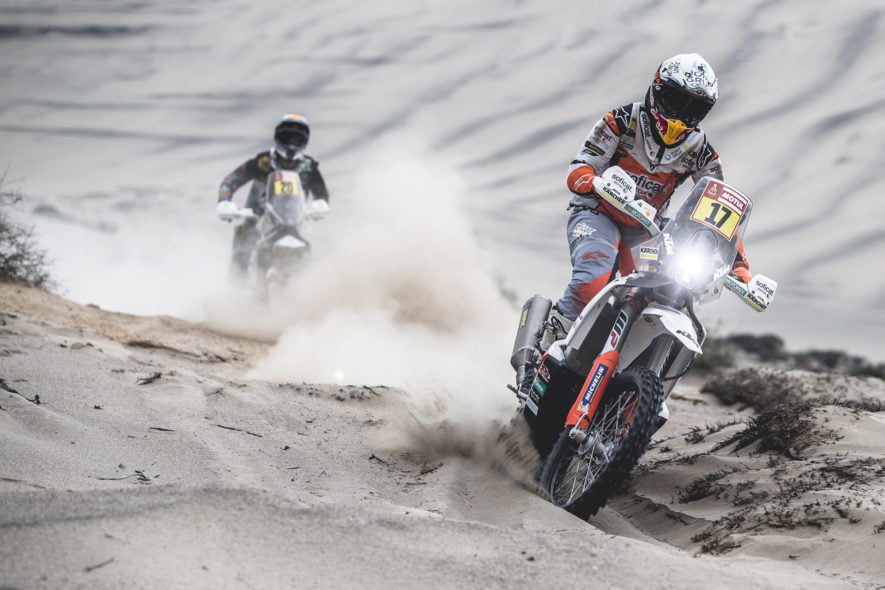 The Americans Of Dakar

– Robby Gordon had a devastating Stage 3 having a rear diff issue sideline him for hours. He eventually got parts and got going under his own power but will have to finish the stage in the dark with not many support crews left. An already long day will get even longer when they have drive another 9 hours to the next start line from where Stage 3 finishes. Hopefully they have some of that SPEED Energy to keep them going.
-Cole Potts stayed to help but was eventually waived on to finish the stage where he finished 56th overall.
-Blade Hildebrand had the best day out of all them who is now in the top 25 after 3 rounds showing the rookie has what it takes to put in a respectable Dakar. At this point its in the teams best interest to put all their efforts into Hildebrand and making sure he can stay consistent and try for a Top 20 finish overall.
-Ricky Brabec started off strong early in the rally but fell back possibly checking on teammate Barreda. Ricky worked his way back up to finish 13th and now sits 7th overall and 18 mins back. With 7 stages to go still has time to make a run for the overall.
-Casey Curie looked strong for most of stage 3 getting as close as 50 seconds from the leader, but after WP7 fell 11 mins back, but still finished a respectable 4th place in the SXS class. He now sits 8th overall and with a penalty of 20 minutes which we aren’t sure what its for.
-Though Toby Price isn’t an American he has a big fan base here. Battling with an injured wrist the seasoned vet was following the lead back when he too hit the heavy fog in the mountains causing him to slow down. Finishing 14 minutes back from Stage winner De Soultrait Price now sits 5th overall just 15 minutes back from the overall. 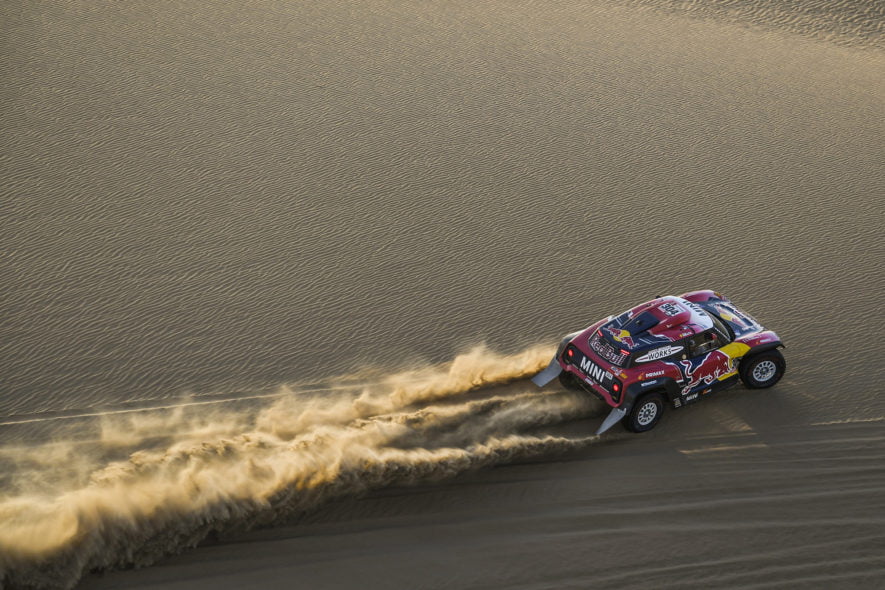 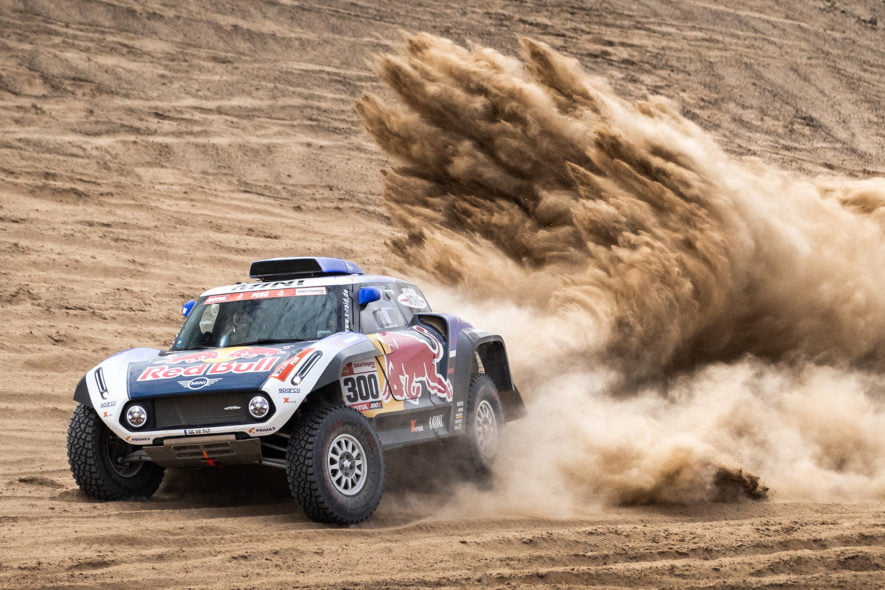 All the teams and crews will be driving into the night on a long liaison stage to the next round. But if Dakar was easy everyone would race it.

Be sure to follow along with us as the race is live on our forums!
RDC – RALLY RAID FORUM