RIVERSIDE, California (October 23, 2014) – The short course racing season comes to a close Friday and Saturday (October 24-25) at nearby Lake Elsinore Motorsports Park with three rounds of competition in the Lucas Oil Off Road Racing Series.
The season that began seven months ago in Arizona hasn’t gone as well as hoped for Stronghold Motorsports, but the series’ three-time Team of the Year is looking forward to the final weekend with as much enthusiasm as it had for the first race.
“We’re ready to go,” Pro 4 driver and team manager Brandon Bailey said of the MAVTV/Toyo Tires/Solar World crew that will field his Pro 4 class Ford truck, Larry Job’s AlumiCraft Honda Pro Buggy and both Junior 1 and Junior 2 Karts for Madix Bailey.
“There were a couple of rounds where we had some issues and getting the new MAVTV/Toyo Tires/Solar World Ford has definitely been an interesting process, but I’m feeling really good and comfortable in the car now,” said Bailey, who is ninth in the standings. “We’ve been able to test the Pro 4 a couple of times since Las Vegas and it went really well. I’m excited about the weekend.
“It would definitely be nice to get a podium (top 3) finish. We’ll have to work really hard for it, but I think we can accomplish it. The main thing is we’re just going to go out and have fun. That’s why we do this in the first place.
“It’s at home, we’re excited and we can’t wait to go racing.”
Job feels the same way. The Las Vegas contractor finished a strong fourth in the one round of Pro Buggy racing run in his hometown and despite a glut of transmission problems that caused to miss two races he is only 18 points out of 10th place in the standings.
“We’re getting better and better,” Job said. “I like the track and I’m looking forward to it. Having the Challenge Cup for the last race is fun. That’s every man for himself and some people usually get a little crazy at the start, so you have to try to be there at the end.”
The Challenge Cup races will bring the curtain down on the season Saturday night. The three Kart classes, Pro Lite and Pro Buggy will have separate races beginning at 6 p.m. Then the crowd-pleasing Pro 2 versus Pro 4 Challenge will get the green flag at about 9:45 p.m., with the Pro 2s enjoying a 30-second head start.
There will be an extra round of racing for Bailey and Job, though, due to the postponement of the second night of racing at Las Vegas last month because of a lightning storm. As a result, there will be one round of championship points races at 7:30 p.m. Friday and a final round at 11:30 a.m. Saturday.
“It’s more seat time and more track time and that’s always good,” Bailey said. “Unforeseen things could happen mechanically to make it (three races in two days) a little difficult. But I don’t think it will be an issue.”
The series awards banquet is scheduled for Sunday, and after that the team will concentrate on preparing for the legendary SCORE Baja 1000 November 12-16. 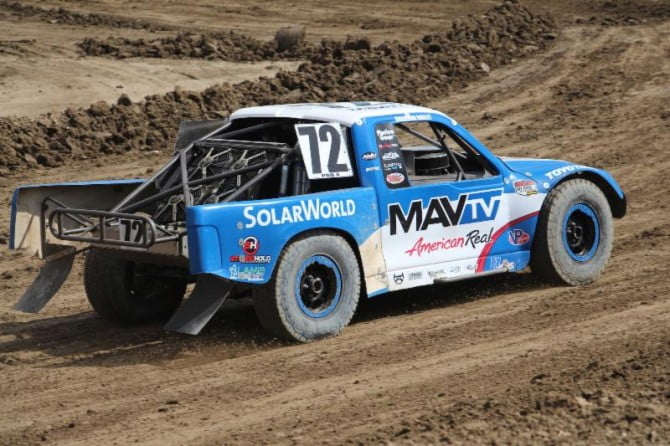