Crandon, WI, (June 26-27, 2021) Coming off of a decent start at the first 2 rounds of the AMSOIL Champ Series, the Stronghold Motorsports team made their way over to the Crandon International Raceway, better known as “The Big House” for rounds 3 and 4 of the CHAMP series. Crandon International Raceway isn’t known to be a forgiving track with room to pass, instead it’s a fast paced, high speed track with large sweeping turns that tend to make for a wild race. Add in the inclement weather and the race teams and spectators are bound to see a flurry of truck parts and carnage when the racers hit the track 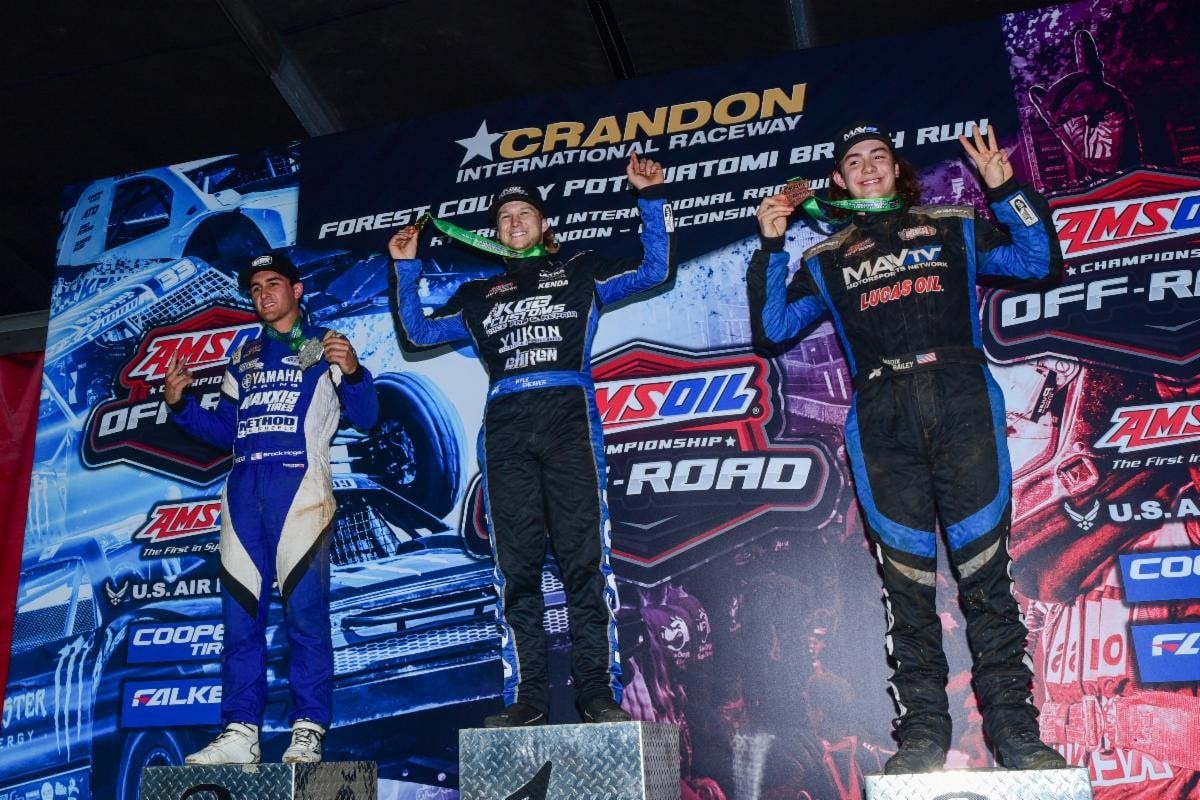 Madix Bailey hasn’t had the opportunity to grow up in the Midwest and understand the weather, as he sees the endless sunshine from his home state of California, nor has he had the opportunity to make “The Big House” a favorite of his on his racing schedule. Coming to Crandon International, Madix hadn’t experienced all the infamous track had to offer, like a Land Rush style start that features a gate drop style start that most tracks don’t support. Having said that, Madix was excited and started Saturday’s race with a 2nd starting position pick and was 5th to the Holeshot. By the 2nd lap Madix had secured a 3rd position, however while trying to make a pass he made contact and spun out but was able to regain control and only lost one position and was able to gain another for a solid 3rd position finish in the Saturday race. 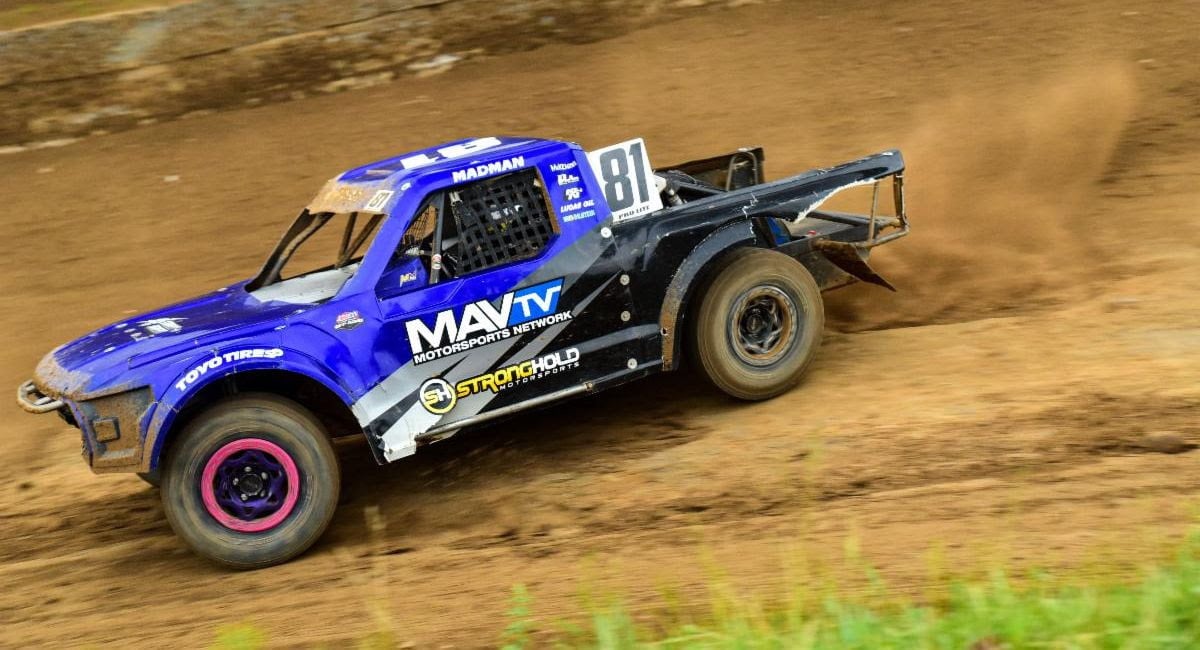 Sunday afternoon, Madix was back on the track running his ProLite truck and had a great start in the 2nd position. Pushing forward through the track, he noticed he wasn’t getting much power out of his ProLite and was finding it harder to hold off the competition and unfortunately struggled but salvaged a 4th place finish for the weekend. 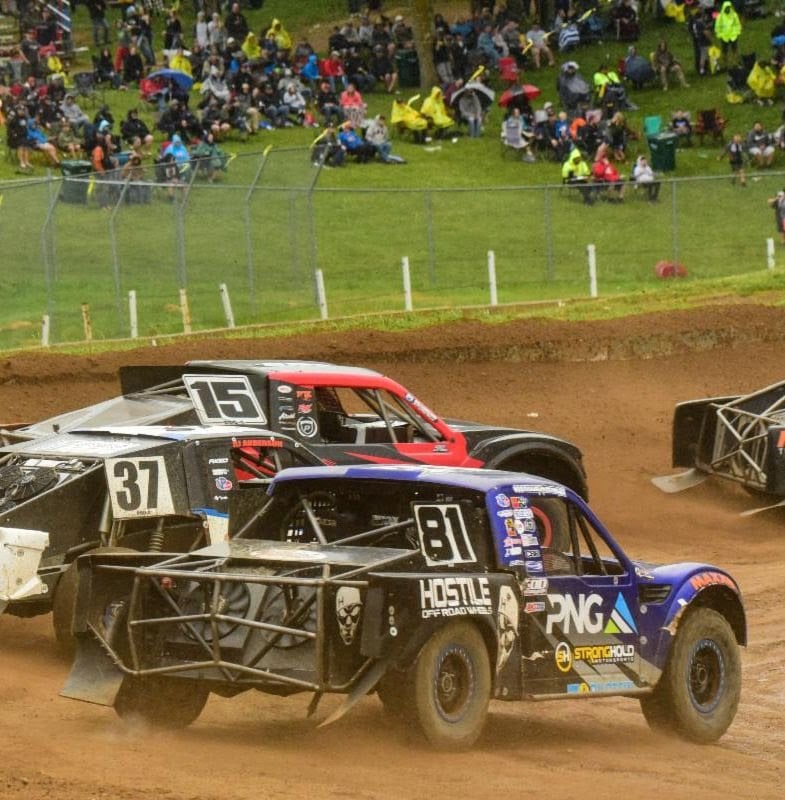 Doug MIttag, Stronghold’s newest addition to the team has raced at Crandon before and was aware of the intricacies this track provides and he came prepared racing the Stronghold Motorsports Pro4 truck. With 3 races to attend to this weekend, time was not on Doug’s side. Nor were the weather conditions. He knew immediately on Saturday when he buckled into the Pro4, when his visor was fogging up…it was going to be one heck of a day. Racing the first race, Doug was able to secure a 4th position for that race, however he discovered a slight mechanical issue that kept him and the team up until the early morning hours fixing the issues.

His 11am race call time on Sundaty, Doug ultimately had a bad start but quickly made up 2 spots. Slipping and sliding all the over the place, as he was securing a 4th position spot, Doug threw the Pro4 hard into the “gravel pit” turn and got into another competitor breaking the front end of his truck and unfortunately DNF’ed his 11am race. 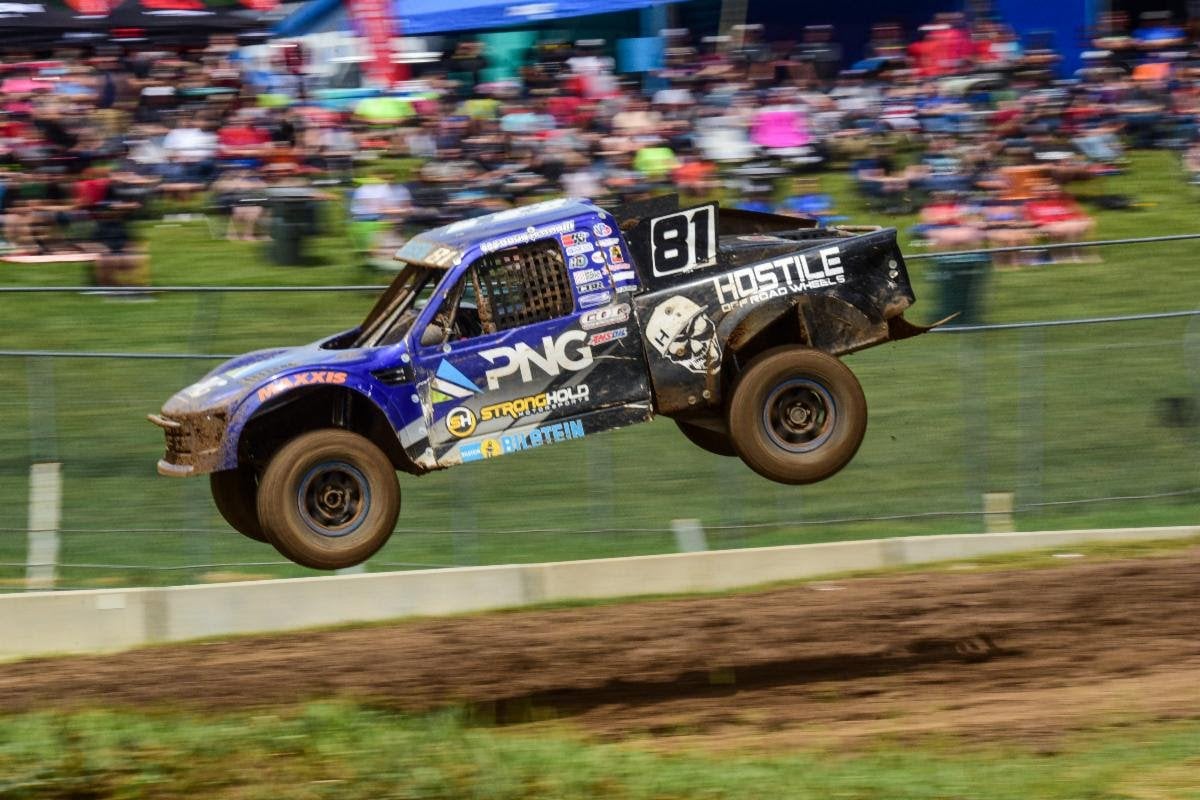 Looking forward to the Bush Run Cup Race in the afternoon, the Pro2 trucks always start ahead of the Pro4’s giving the Pro2 trucks a head start. Doug dodged carnage left and right early in the race and was the first Pro4 to catch up to the Pro2 trucks, setting the fastest lap time of the race. Doug was looking like he was going to catch the leaders and win, as he went for a pass in the Argonne corner and the truck cut too tight to the turn and got a little squirrely as Doug over-rotated to compensate, yet he recovered and continued his momentum passing trucks and was able to secure a 4th position spot. During the after-race inspections, it was clear that a podiumed competitor didn’t qualify, and that mistake put Doug into the podium position for 3rd place. Not the way he wanted to podium, but a podium, nonetheless.

The next race for the Stronghold Motorsports team takes place in Elk River, MN on July 9th and 10th at the ERX Motor Park for the ERK Off-Road National. Live streaming of the Champ series can be found here: https://champoffroad.com/. Be sure to tune in and watch the Stronghold Motorsports team on some of the fastest short course racing in the Mid West!