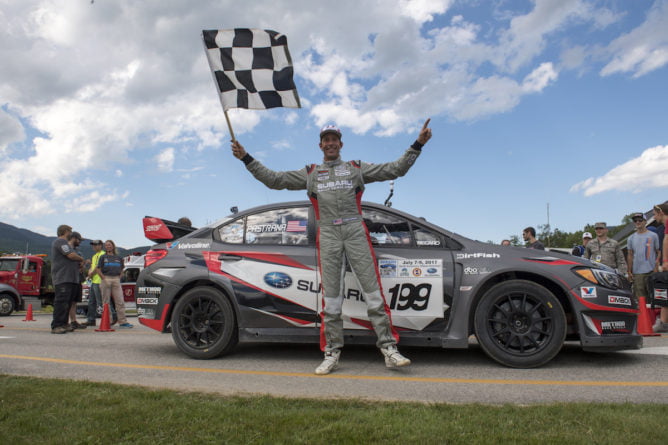 Subaru Rally Team USA driver Travis Pastrana has smashed the Subaru Mt. Washington Hillclimb record, winning the event at the wheel of his specially-prepared Subaru WRX STI rally car. Pastrana sped to the summit of the sinuous 7.6 mile Mt. Washington Auto Road in an amazing 5 minutes 44.72 seconds, over 24 seconds faster than the previous record of 6 minutes 9.09 seconds set by his teammate David Higgins in 2014.  Higgins’ own attempt at lowering the record came to a startling halt when he slid wide five miles into his ascent and went off course. Higgins was unharmed in the incident but could not continue.

“I can’t say enough how fun these cars are to drive, and thank Subaru for providing one to me. I hope this record can stand for a little while,” explained Pastrana. “On our first run I leaned on the tires too much on the bottom half, which made the top half very loose and scary but really fun, I was sideways a lot but I’m sure I lost some time.  On the second run I conserved the tires and drove cleaner, I really didn’t expect to drop the record further.  This road is such a challenge, it’s probably the toughest road to drive flat-out in the world.” 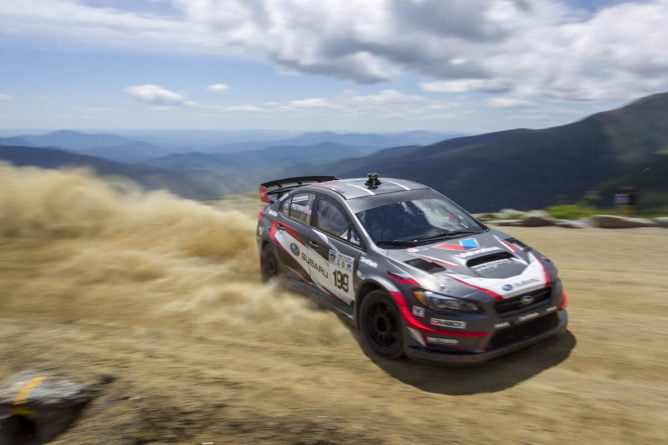 The Subaru Mt. Washington Hillclimb, first run in 1904, is one of America’s oldest motorsports events. The 7.6 mile Mt. Washington Auto Road is one of the ultimate challenges for driver and automobile, the serpentine tarmac and gravel road is lined with trees and dramatic drop-offs as it winds its way to the 6,288 foot summit of the Northeast’s tallest peak.  Subaru driver David Higgins broke the course record in 2011 and again in 2014.  For the 2017 edition of the event Subaru Rally Team USA entered two identical Vermont SportsCar-prepared Subaru WRX STI rally cars in the top tier Unlimited Class.  The cars featured over 600hp 4-cylinder turbocharged Subaru BOXER engines and a significantly lightened chassis, but unlike in 2014 where Higgins and Pastrana ran in the Rally class, no co-drivers are permitted. 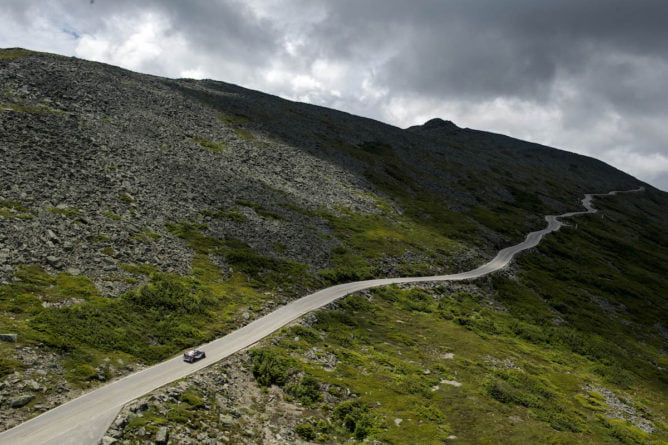 “We’re exceptionally proud of our team’s new record at this iconic race event,” stated Subaru motorsports marketing manager Rob Weir. “To defend and beat our old record took massive commitment from the team and especially our drivers. We put a production-based WRX STI on the top of the podium even against purpose-built hillclimb machines.”

David Higgins was expected to challenge Pastrana, with the duo separated by just seconds in the early practice sessions on the road’s top and bottom sections.  Higgins first run on Sunday ended abruptly after he entered the famous gravel turn at Cragway Springs, approximately 2 miles from the finish, at too high a speed and went off the road after clipping a rock.  Higgins’ Subaru rally car landed on its wheels and came to a halt not far from the edge of the road, with Higgins emerging unscathed but disappointed. 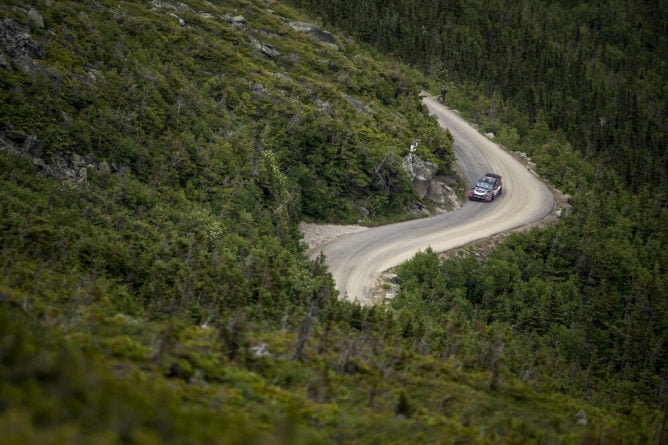 “It was going really well up until it went really bad,” explained Higgins. “It’s one of those events that you put so much work into one small run, so the disappointment is massive. If you are going fast enough to win the event you are going fast enough to crash.  But there is no better person to lose my record to than Travis. I’m really happy for him and the job the team has done.”