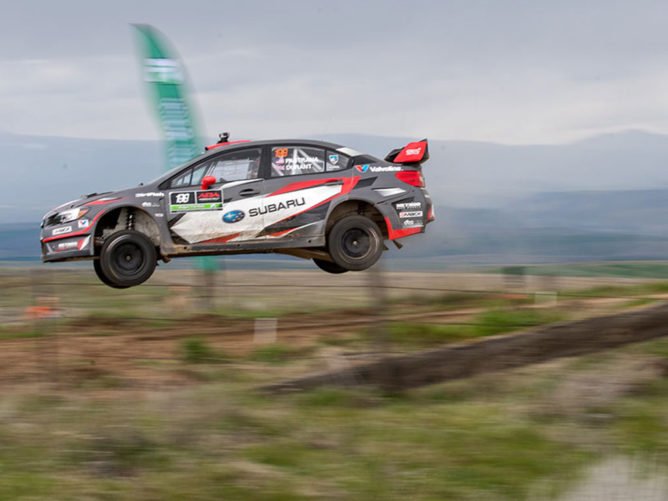 Subaru Rally Team USA driver Travis Pastrana held off teammate David Higgins to win the 2017 Oregon Trail Rally held near Portland, Oregon. For a second year in a row, the factory duo finished 1-2 overall. Pastrana and co-driver Robbie Durant lead from the first stage in their #199 2017 Subaru WRX STI, but their lead was slim and under constant attack from David Higgins who had won the previous six Oregon Trail Rally events in a row. Pastrana and Higgins are now tied atop the ARA Driver’s Championship standings heading into next month’s Olympus Rally near Olympia, Washington.

The Oregon Trail Rally represented round 2 of the 2017 American Rally Association Championship and is regarded as one of the most scenic and challenging events on the calendar. After starting on mixed surface stages at Portland Intl. Raceway the action moved east for gravel rally stages along the scenic Columbia Gorge. Teams contended multiple tarmac stages as well, adding to the challenge.

This year’s result was as intense and as closely fought as last years’ Oregon Trail Rally, where Higgins and Pastrana traded stage times throughout the event with Higgins earning victory by just 9.5 seconds. However, this year it was revenge for Pastrana as he led from start and held off Higgins’ constant attacks to emerge victorious by just 10.5 seconds.

The key to Pastrana’s success may have been a tire choice gamble early in the event where on the mixed tarmac and dirt stages at the Portland International Raceway he elected for tarmac tires whereas Higgins opted for gravel tires. The gamble paid off and Pastrana earned a 12.7 second lead which he clung to throughout the rally. Pastrana would go fastest on eleven stages while Higgins went fastest on five stages with the final gap, after three days of rallying and over 100 miles of stages, at just 10.5 seconds.

“David Higgins has been a mentor and someone I’ve always looked up to and tried to emulate my driving after my whole rally career, so to be able to battle him and come out on top is an amazing feeling,” explained Pastrana at the podium. “He was undefeated here, and had won here the last six years in a row, so we had to be perfect and go all-out to beat him. Our Subaru was amazing and Robbie (Durant) was perfect on the notes, everything worked really well. To get the win here and be tied in the championship standings is all we could have asked for.”

Higgins was put on his back foot early in the event trying to overcome the small lead Pastrana earned on the opening day. He and co-driver Craig Drew attacked and clawed back time only to have Pastrana answer back and erase the gains. “It was a brilliant weekend, and great for the sport, a big fight. You can’t win them all and Travis and Robbie had a great rally, everything we tried they would answer back,” said Higgins.

Subaru Rally Team USA heads to Memphis, TN for the first round of the 2017 Red Bull Global Rallycross Championship with factory drivers Chris Atkinson and Patrik Sandell, April 28/29 at Memphis International Speedway. Higgins and Pastrana return for round three of the American Rally Association National Championship, Olympus Rally held near Olympia, WA May 12.