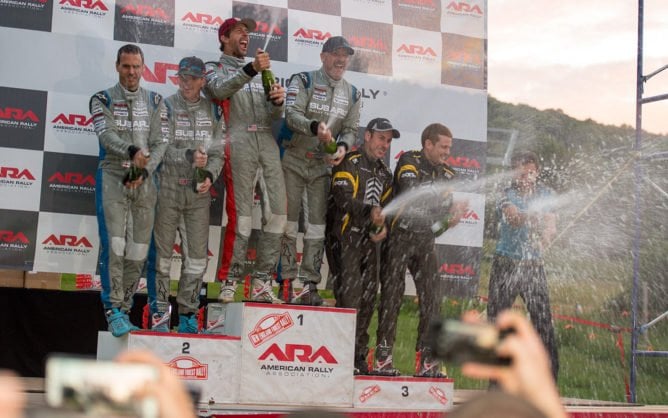 Serving as round five of the American Rally Association (ARA) National Championship, the New England Forest Rally (NEFR) is a two-day stage rally that takes place on the back roads and logging tracks of Western Maine and Northern New Hampshire. The stages are rough, technical and rocky. NEFR is known as one of the roughest rallies of the season. This year’s run of NEFR will be remembered by fans and rally teams alike as nothing short of dramatic.  For Subaru Rally Team USA, overcoming personal injury and heavy car damage would be required on their way to a double podium finish.

After Pastrana’s regular co-driver Robbie Durant injured his back on a hard jump impact on the final stage of the first day’s action a replacement co-driver was found from within the team’s own ranks.  Subaru Rally Team USA’s marketing coordinator Grzegorz Dorman, an accomplished co-driver, was on site and up for the job.

“I found Greg (Grzegorz) at the restaurant Friday night and I said ‘what are you doing tomorrow?’ He said: ‘well, I’m going kayaking and I brought my girlfriend.’ We changed his plans!”, explained Pastrana.

With a tight battle for championship points leading into NEFR, Pastrana was under pressure from teammate Higgins to win the event in order remain in contention for the ARA drivers’ championship. Driving at a conservative pace with replacement co-driver Dorman would not be an option for Pastrana.

With a gap of less than two seconds separating the teammates going into day 2 of the rally, Pastrana and Dorman would need to find their pace immediately to challenge Higgins and Drew for victory. Pastrana and Dorman acclimated quickly, claiming a stage win by the third stage of day two, but the challenges weren’t over for SRTUSA.

Higgins had amassed a 40 second lead as the final stages of the rally approached and was just two stages from the finish when disaster struck. On stage 12, Higgins hit an exposed rock causing severe damage to the rear suspension of the #75 car and forcing him to drive on three wheels out of the stage and then over twenty miles back to his service crew. The service crew’s efforts enabled Higgins to continue to the final stage but the damage meant he had just front wheel drive and no rear brakes.  Pastrana and Dorman would win the final stage and overtake Higgins and Drew for the dramatic win.

“When an opportunity presents itself you can’t say no, but I also knew I can definitely fit in and keep up with Travis’ driving. This is my third year working with Subaru Rally Team USA and I have experienced a different side of it today. Less than 24 hours after receiving a call from Craig Drew asking if I would be able to do it, I was standing on the top of the podium with Travis!”, explained Grzegorz Dorman at the podium celebration.  “The job was to get Travis safely to the finish, but it turned out that we got more than what we hoped for. I want to thank Travis and the entire team for the trust they have put in me today. It was a great pleasure.”

“I didn’t realize how much experience Greg had and how good he actually was; he picked it up really quick. He came through with flying colors. On the last stage we didn’t know how much we were down or up and I told him we had to drive this stage like it meant the championship, and he came through,” explained Pastrana.

The 2017 American Rally Association Driver’s Championship will now be decided at the next and final round in the series at the Ojibwe Forests Rally next month in Minnesota. Stay tuned – more excitement and awesome rally action is headed your way August 25-26th!