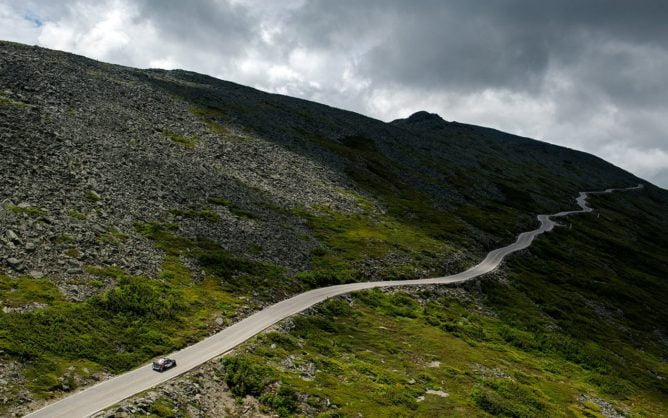 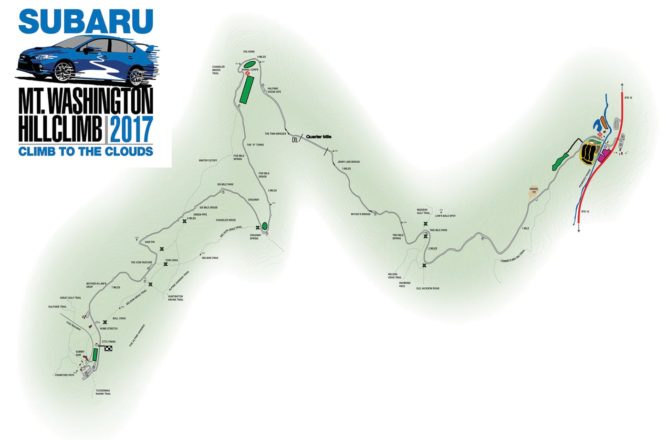 ✔️ Total Elevation Gain: 4,535 feet (from the Start line to the Finish Line) 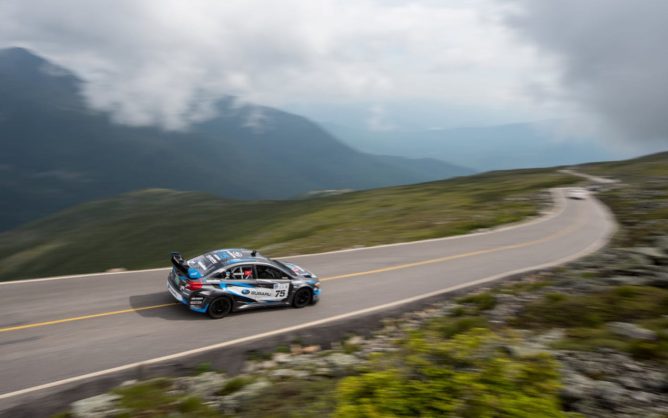 Today’s practice session saw 80 entered teams in a variety of vehicles drive just the upper half of the 7.4 course twice. The weather was ideal at the base with sunny conditions, but the summit and upper sections of the auto road were in and out of the clouds, but generally conditions were good for the racers. 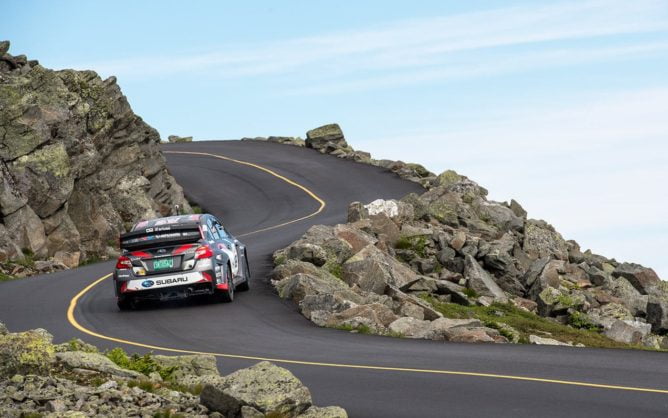 “It was interesting, the top half of the course with new pavement was more jittery than i thought it would be, it may have been how the pavement was, it was hard to keep the car straight. But the motor and HP on this car took me the whole first run to NOT get scared, where I was actually putting my foot down. On the 2nd run we committed more, car felt great, went faster. The time up this mountain won’t be affected by the car I think, the car outperforms where my driving is so far, so we’ll see what happens. “ 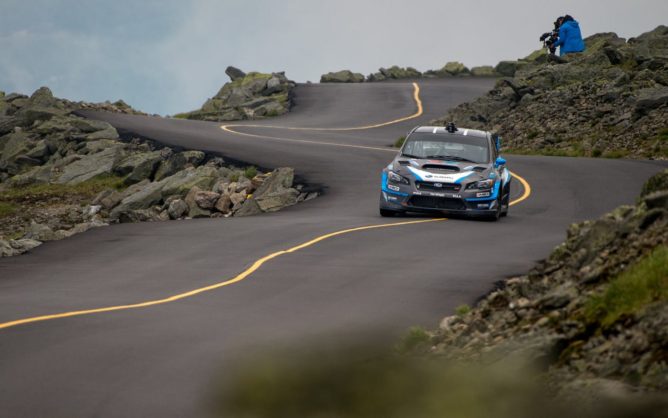 “Yeah it was OK. We have a few changes to make on the car, to dial it in a bit better, still trying to learn the car and its new specs and power. We will be busy this afternoon tweaking the car, looking at the in-car video and doing some homework. The new tarmac section is much, much slippery than in previous years, it’s a lot slower then there, and the gravel section has a lot of loose gravel so its slower too. Maybe as we put some rubber down over the weekend the course will come to us a bit and get quicker.”

Pastrana and Higgins On Record Breaking Pace after Final Practice Day at the Mt. Washington Hillclimb

Subaru Rally Team USA drivers Travis Pastrana and David Higgins continued to top the timesheets at the final day of practice at the legendary Mt. Washington Hillclimb. This morning the competitors practiced on the bottom half of the course with two runs each. Pastrana and Higgins, each driving equally prepared 600hp Subaru #WRX #STI rally cars, finished 1-2 on both runs, with Pastrana edging out Higgins by just under 2 seconds on his fastest of two runs.

Both drivers were faster than record pace in practice and if they have a clean run and the weather stays clear on Sunday they have a good chance to topple David Higgins’ current record of 6 minutes and 9.09 seconds, which he set in 2014. But ultimately the record will play second fiddle to the extremely tight race between the friendly rivals.

Race day is tomorrow with each competitor getting two full timed runs up the 7.6 mile Mt. Washington Auto Road, with the fastest of the two runs counting. Cars are expected to start their runs at 9:30am ET, starting from slowest (based on practice times), with Higgins and Pastrana running last. After each car has completed their first run all cars will start a second run to the summit at 1:30pm ET. 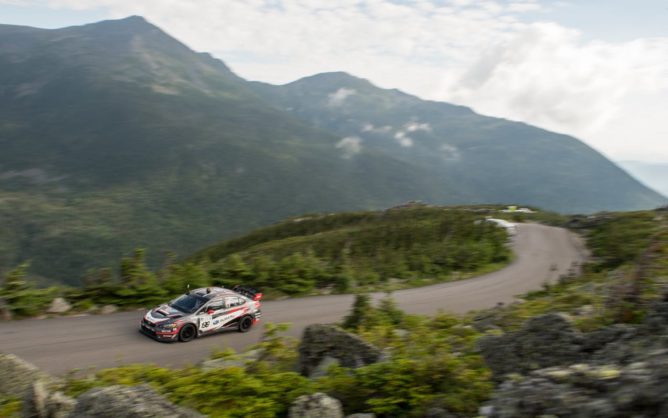 “I’m really looking forward to a good race, David and I are really close on our times. There are a couple other guys with really impressive hillclimb cars out there too. We had good runs today, I tried out some different things on the car with tires and setup, so we learned a lot. I feel really good about tomorrow but anything can happen here, it’s a huge challenge.” 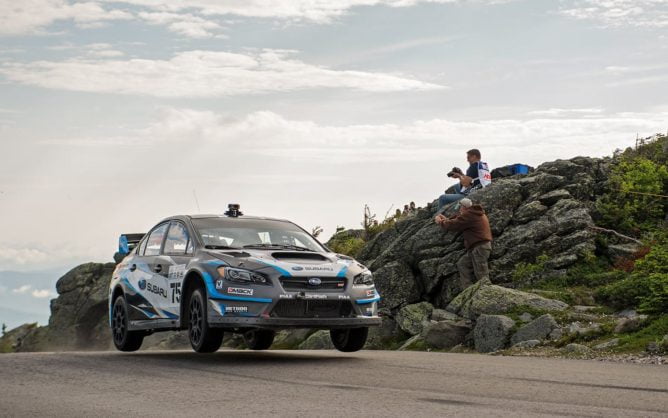 “Well it was another learning experience today, with such a faster car. We had lots of sections of the road that are different from 2014. We had jumps where we never had jumps before and corners we used to be able to take flat out we are just going much faster through now. The cars really are amazing. I’m really conscious at this event to treat these practices as a test and really learn about the car and get the information we need. We have only run the course halfway each time, so for example some of the feeling we have with the tires on a half run will be different when we run the full course. We need to piece together all the information we have and see if we can come up with the best tool for the job tomorrow. We have some good ideas about what we will do for tomorrow on setup and tire choice now.” 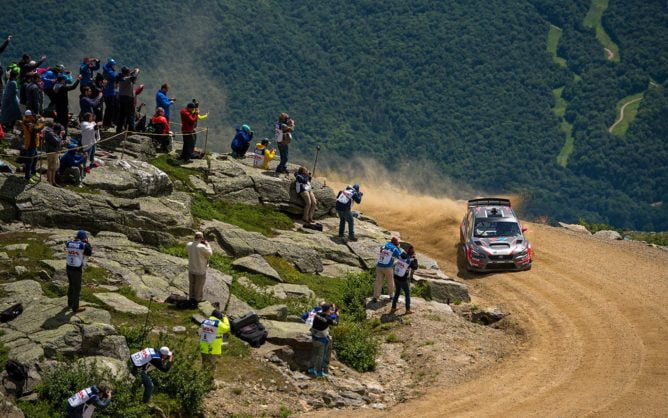 Travis Pastrana crushed the Mt. Washington Hillclimb record today reaching the 6288’ summit in a stunning 5:44.72. The #199 WRX STI with a specially fitted 600hp engine actually beat the record two times, running a 5:46.28 on the first attempt up the twisty 7.4 mile race course. This is just shy of a twenty-five second gain on the old record of 6:09.09 held by David Higgins from 2014.

David Higgins piloting an identically prepared #75 WRX STI, was equally determined for a new record. However, as he approached the classic dirt Cragway Turn 2.5 miles from the summit, he carried too much speed. Drifting wide he hit rocks on the outside and spun off the road in a dramatic moment. As the helicopter circled in for a closer look, an extremely disappointed David Higgins emerged unhurt from his 2017 Subaru WRX STI. Despite the dramatic looking incident, the car was relatively undamaged with the exception of the left rear wheel assembly. Going off the side of Mt. Washington when gunning for gold is legendary in its own right. As a consolation, David Higgins did set the fastest speed on the Quarter Mile section ever recorded at 116 miles per hour.

At the base after the second record-breaking run, an ecstatic Travis Pastrana greeted fans and the rest of his SRTUSA crew. When asked about how he bested his first run, Travis described driving the bottom half cleaner and actually a little slower, however, this conserved his tires significantly allowing for a much faster top section. It was a dazzling performance by motocross legend and Subaru Rally Team USA Driver Travis Pastrana. Congratulations TP! 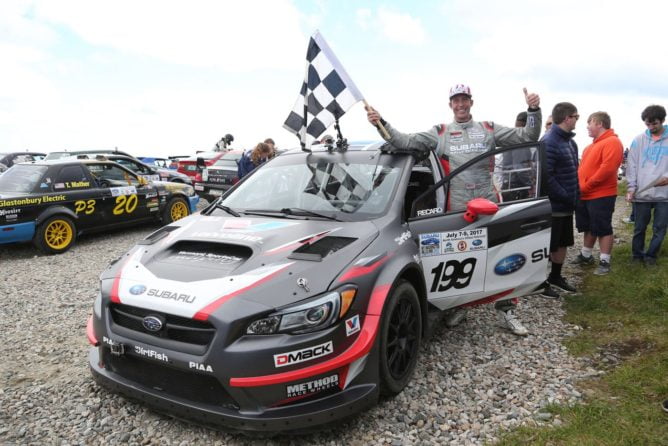 “It was scary! We lined up to take off on our first run but they held us from going and we hear David had gone off the road. Part of you says that these cars are so phenomenal that you could get the record without going 10/10ths but then another part of you says ‘no I want this record and to have it last as long as possible and I need to just go for it.’ Knowing David was out meant there was less pressure and I could enjoy driving the car but I still really went for it. “

“I can’t say enough how fun these cars are to drive, and thank Subaru for providing one to me. I hope this record can stand for a little while. On our first run I leaned on the tires too much on the bottom half, which made the top half very loose and scary but really fun, we were sideways a lot but I’m sure we lost some time. On our second run I was able to conserve the tires and drove cleaner, I really didn’t expect to drop the record further. This road is such a challenge, it’s probably the toughest road to drive flat-out in the world.” 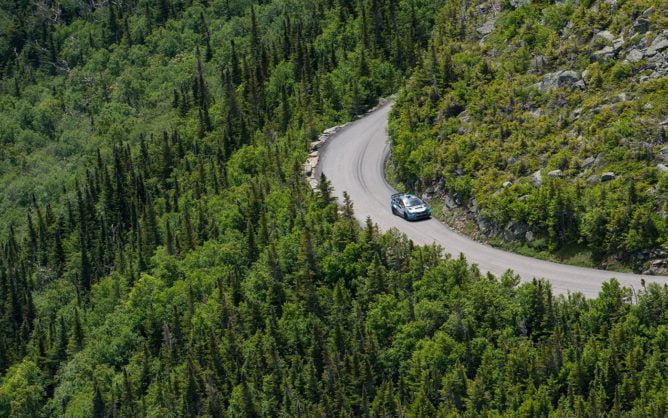 “It was going really well up until it went really bad. It’s one of those events that you put so much work into one small run, so the disappointment is massive. If you are going fast enough to win the event you are going fast enough to crash. But really there is no better person to lose my record to than Travis. I’m really happy for him and the job the team has done.”

About the accident: “There is a section leading into the Cragway gravel turn that I wasn’t sure about, hadn’t had it perfected and memorized it. There are a sequence of crests and short corners and I didn’t feel really good about it in practice, I actually walked the section after practice to get a visual on where I needed to slow down. But today I just didn’t get it right. I thought I had bit more road to go before the big turn and so just entered too fast and pitched it sideways to slowdown but clipped a rock on the outside. Game over. “

Cherry Hill, N.J. – Subaru Rally Team USA driver Travis Pastrana has smashed the Subaru Mt. Washington Hillclimb record, winning the event at the wheel of his specially-prepared Subaru WRX STI rally car. Pastrana sped to the summit of the sinuous 7.6 mile Mt. Washington Auto Road in an amazing 5 minutes 44.72 seconds, over 24 seconds faster than the previous record of 6 minutes 9.09 seconds set by his teammate David Higgins in 2014. Higgins’ own attempt at lowering the record came to a startling halt when he slid wide five miles into his ascent and went off course. Higgins was unharmed in the incident but could not continue.

“I can’t say enough how fun these cars are to drive, and thank Subaru for providing one to me. I hope this record can stand for a little while,” explained Pastrana. “On our first run I leaned on the tires too much on the bottom half, which made the top half very loose and scary but really fun, I was sideways a lot but I’m sure I lost some time. On the second run I conserved the tires and drove cleaner, I really didn’t expect to drop the record further. This road is such a challenge, it’s probably the toughest road to drive flat-out in the world.”

The Subaru Mt. Washington Hillclimb, first run in 1904, is one of America’s oldest motorsports events. The 7.6 mile Mt. Washington Auto Road is one of the ultimate challenges for driver and automobile, the serpentine tarmac and gravel road is lined with trees and dramatic drop-offs as it winds its way to the 6,288 foot summit of the Northeast’s tallest peak. Subaru driver David Higgins broke the course record in 2011 and again in 2014. For the 2017 edition of the event Subaru Rally Team USA entered two identical Vermont SportsCar-prepared Subaru WRX STI rally cars in the top tier Unlimited Class. The cars featured over 600hp 4-cylinder turbocharged Subaru BOXER engines and a significantly lightened chassis, but unlike in 2014 where Higgins and Pastrana ran in the Rally class, no co-drivers are permitted.

“We’re exceptionally proud of our team’s new record at this iconic race event,” stated Subaru motorsports marketing manager Rob Weir. “To defend and beat our old record took massive commitment from the team and especially our drivers. We put a production-based WRX STI on the top of the podium even against purpose-built hillclimb machines.”

David Higgins was expected to challenge Pastrana, with the duo separated by just seconds in the early practice sessions on the road’s top and bottom sections. Higgins first run on Sunday ended abruptly after he entered the famous gravel turn at Cragway Springs, approximately 2 miles from the finish, at too high a speed and went off the road after clipping a rock. Higgins’ Subaru rally car landed on its wheels and came to a halt not far from the edge of the road, with Higgins emerging unscathed but disappointed.

“It was going really well up until it went really bad,” explained Higgins. “It’s one of those events that you put so much work into one small run, so the disappointment is massive. If you are going fast enough to win the event you are going fast enough to crash. But there is no better person to lose my record to than Travis. I’m really happy for him and the job the team has done.”