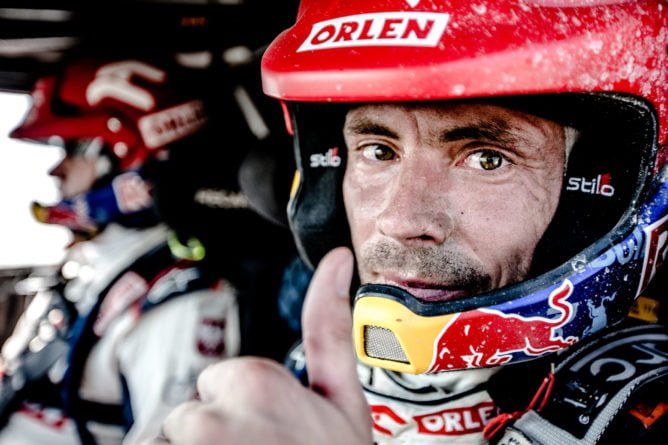 After his switch from two to four wheels for the 2016 Dakar Rally, the young Pole now celebrated his first win in the Car cetegoryTogether with his Belgian navigator, Tom Colsoul, he won the sixth round on the FIA Cross Country Rally World Cup calendar, the Italian Baja. With this success he worked his way up to second position in the World Cup standings. Meanwhile, Mohamed Abu Issa (QAT) and Xavier Panseri (FRA) in a second MINI ALL4 Racing finished third, in the Baja.
Przygonski held the lead from the Super Special Stage on Friday evening. Altogether, he won four of the six stages. “My first win,” beamed the Pole. “We pushed right from the start but the Baja wasn’t easy. Very technical and partially tricky when it came to the navigation. The MINI ran flawlessly. At the beginning, the route took us across muddy sections and in was very slippery. Today, however, it was dry and bumpy.”
In the meantime, Abu Issa had some bad luck on Saturday morning when he laid his MINI on the side after getting stuck o the outside of a corner. Issa and Panseri succeeded in getting the vehicle back on its wheels but they lost too much time to have a chance of making it to the very top.
The next FIA Cross Country Rally World Cup round is the Baja Aragon in Spain. And before the Baja Aragon, the calendar features another season highlight: The Silk Way Rally, from Moscow, Russia, to Xian, China. In the coming days we will announce the drivers who will contest this event.
Overall standings Italian Baja 2017:
1. J. Przygonski (POL) / T. Colsoul (BEL) MINI ALL4 Racing – 5h 41m 21s
2. M. Zapletal (CZE) / M. Sykora (SLO) Hummer – 5h 57m 33s
3. M. Abu Issa (QAT) / X. Panseri (FRA) MINI ALL4 Racing – 6h 12m 44s
E
Ernesto Araiza