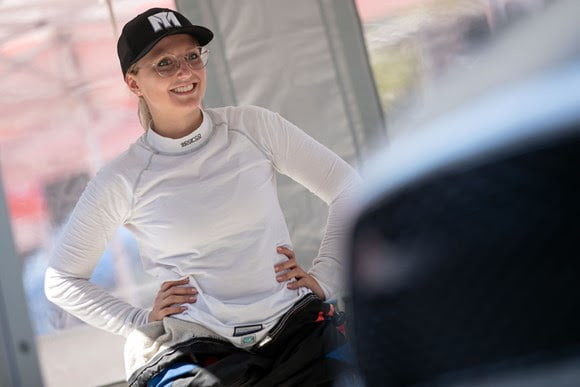 6 July 2021, London: Extreme E, the electric off-road racing series, today announces Tamara Molinaro as its Championship Driver, following the news that predecessor Jutta Kleinschmidt will race for ABT CUPRA XE for the remainder of the 2021 season.

Italian-born Tamara began her racing career at the age of 11 and gradually made her way up to the U27 European Rally Championship taking the Ladies European Rally Champion title – the second-youngest after Andretti United Extreme E’s Catie Munnings – in 2017 after winning four of the eight rounds and topping the table in 40 stages.

In 2018, the 23-year-old moved into the WRC2 class in the World Rally Championship and in 2019 dovetailed a second season on the WRC support bill with a Titans RX Rallycross Championship campaign – the only female in the series – winning several qualification races and finishing fifth overall.

Tamara joins Extreme E as Championship Driver alongside Timo Scheider, supporting the series in both an advisory role and as a back-up driver should any of the teams require a replacement during an X Prix, as due to the nature of the race locations, teams won’t have a reserve driver on site.

James Taylor, Chief Championships Officer, Extreme E, said: “We are delighted to welcome Tamara to Extreme E. She has a great pedigree already at such a young age in both rallying and rallycross, and we think she will bring a lot to Extreme E, and be the perfect replacement should any teams require her at our upcoming X Prixs.

“But her role is much wider than that, and we are looking forward to having her in Greenland with us for the Arctic X Prix and receiving her input on the course alongside Timo [Scheider]. Having spent time as both a driver and co-driver she has a fantastic perspective on racing, so her feedback will be crucial to creating another spectacular X Prix.

“Finally, our thanks and appreciation go out to Tamara’s predecessor Jutta Kleinschmidt who played a big part in the success of our opening two events. We now look forward to watching her race for ABT CUPRA XE for the rest of the Season.”

Tamara Molinaro, Extreme E’s newly appointed Championship Driver, added: “I have been working really hard to try and get involved in Extreme E over the past few months as I’ve followed the series with huge interest since the beginning. I think it is one of the most exciting and fair racing formats ever and the thought of being able to race with a purpose gives me extra motivation.

“My goal has always been to make it to the top of the motorsport ladder so the opportunity to work within Extreme E as a Championship Driver is a dream come true, and I will put all my efforts into doing my job in the best way possible. I can’t wait to get started in Greenland!”

Extreme E has already completed X Prixs in the Saudi Arabian desert and the beaches of Senegal with Kangerlussuaq, Greenland hosting the Arctic X Prix from 28-29 August. Some of the biggest names in motorsport including championship leaders Molly Taylor and Johan Kristoffersson, plus Timmy Hansen, Carlos Sainz Snr., Catie Munnings and Christine GZ will be racing alongside the Russell Glacier on an area which has retreated due to the climate crisis. By racing in this location, Extreme E hopes to shine a spotlight on the devastating effects of climate change and inspire change.