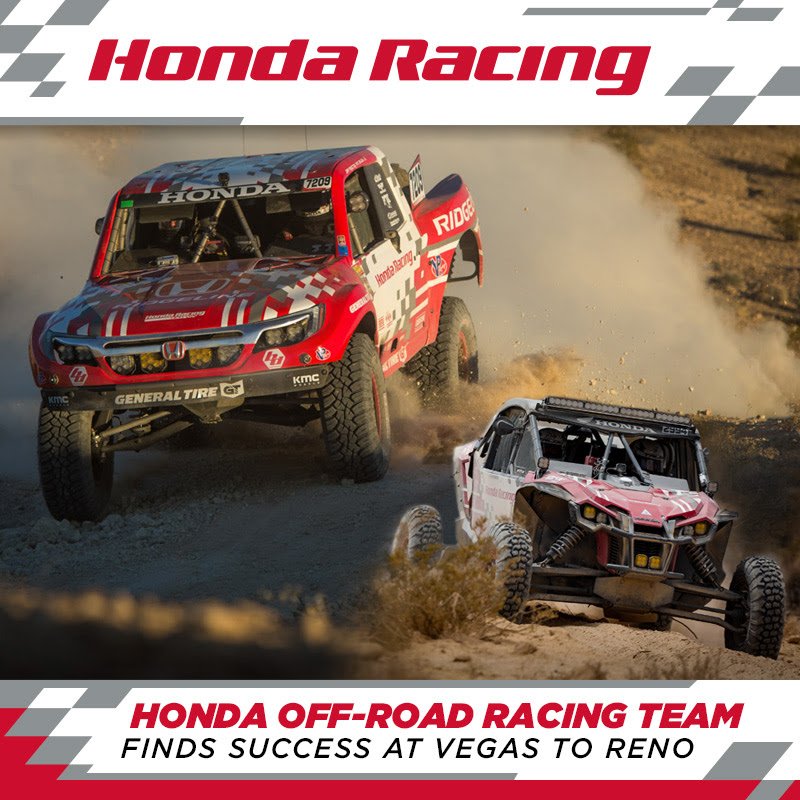 Once again, the Honda Off-Road Factory race team met the brutal challenges of desert racing head-on in the 24th annual Best In The Desert Vegas to Reno, against a record-breaking field of entries. The team’s well-prepped Baja Ridgeline and Talons faced a variety of challenges over the race course’s 514 miles. 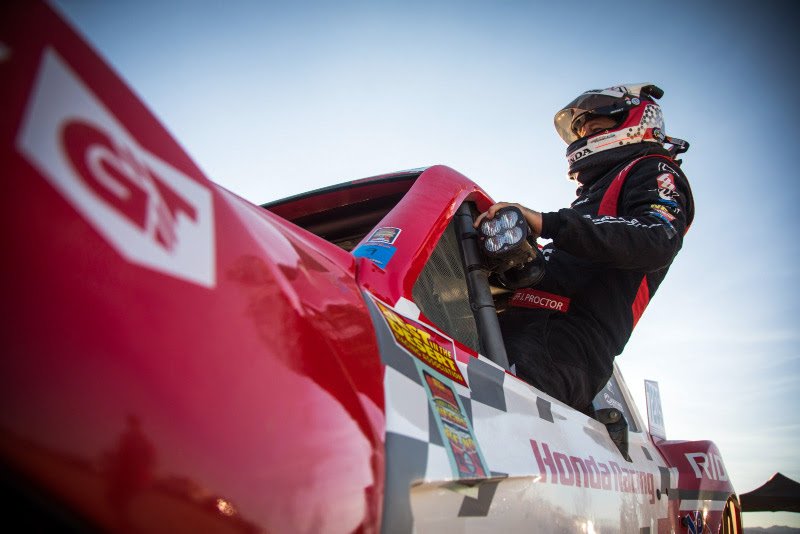 Jeff Proctor and Patrick Daily shared driving duties in the No. 7209 Ridgeline, with Evan Weller and Michael Loomis navigating. The truck qualified P1 in the limited race classes, but that didn’t mean clean air. The team started behind the 6100 class and fought their dust. 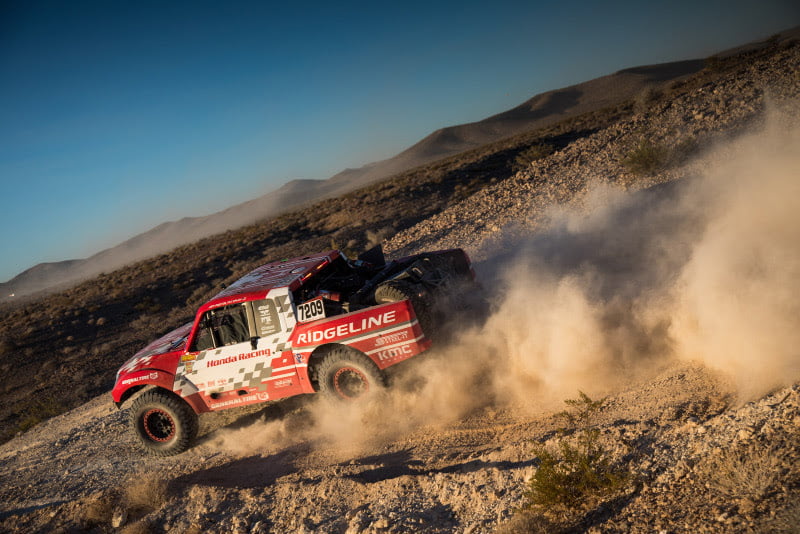 “It was one of those never-ending days of racing.” says Team Principal and Ridgeline starting driver, Jeff Proctor, “We had a fight to the finish in the Baja Ridgeline. We chased a few gremlins, but our team never gave-up. It was a race with all the desert variables in play. If it wasn’t the 100 miles of talcum powder like silt, it was vapor lock from the desert heat, or the super slick mud in the last 75 miles of the race. I’m so proud of our team. In typical Team Honda style, we rose to meet all the challenges. At the end of the race we finished P2, only 21* minutes behind the winner after almost two hours of downtime.” 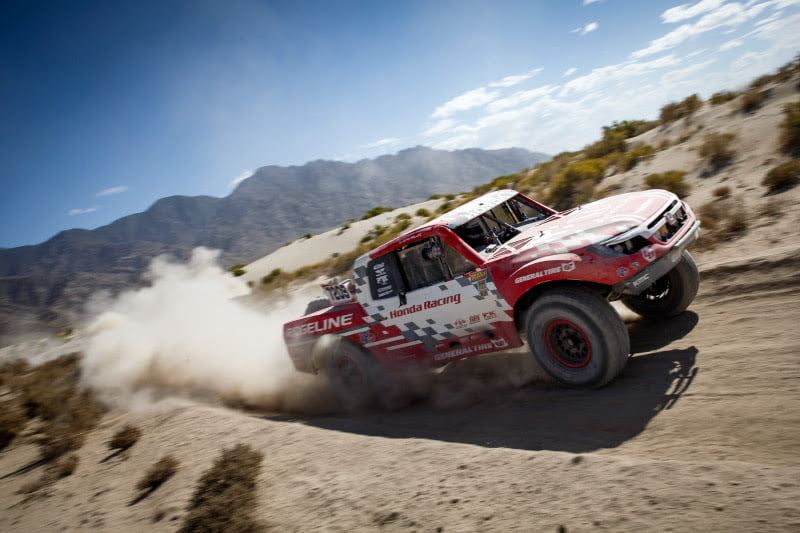 It was a tale of two Talons for the No. 2933, piloted by Eliott Watson and the No. 2994, driven by Christopher Polvoorde. Watson was out around RM 200, while Polvoorde finished the race. By luck of a draw to determine start order, both started towards the back of the class. In the first 100 miles, they had the pace to pass and move up as many as 14 positions. Watson’s Talon encountered a “freak” mechanical issue that all the testing and prep wouldn’t have solved. According to Proctor, “It’s a simple fix, and part of the fun of new race builds.”

Watson recounts, “It was great to be back behind the wheel of the Talon this weekend. Although, the end result doesn’t show it, I felt that we had a really strong run going with no mistakes and making passes early on in the race. With all of the silt, rocks, and heat of the day that we had to deal with, we showed that the Talons are capable to run up in the front of the pack of UTVs in demanding conditions. Now it’s time to focus on getting the Talons ready for Baja for the first time.” 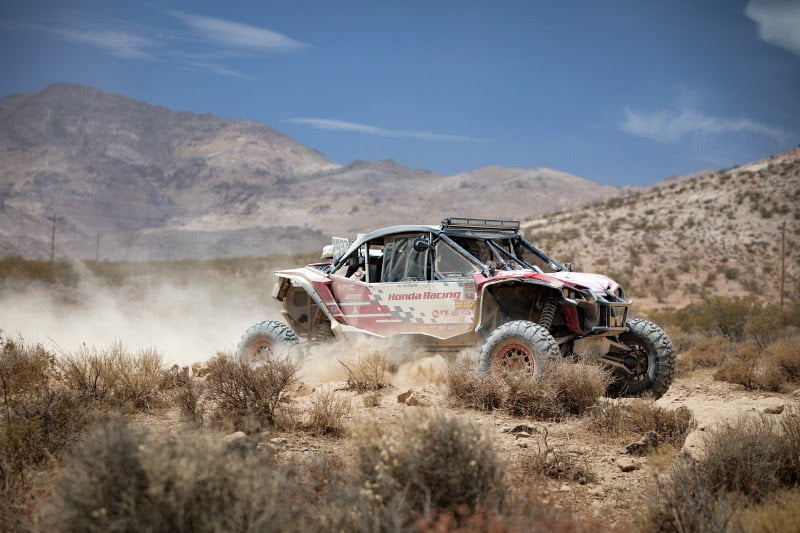 “Right off the start I saw a few opportunities and started picking off cars.” Polvoorde recalls his race day, “The dust was really bad, so any chance to get by someone, you had to take it. Once we got a solid track position I just cruised and started clicking off miles. Next thing we knew, we were third physically after starting 25th. Unfortunately at RM 290 we had a mechanical to deal with and we were down for about 2 hours. The team worked hard to get us back on course and we finished. Overall it was great to see see how fast these cars were without even pushing hard.” The No. 2994 Talon finished  the grueling race in P12* with a time of 15:37:51. 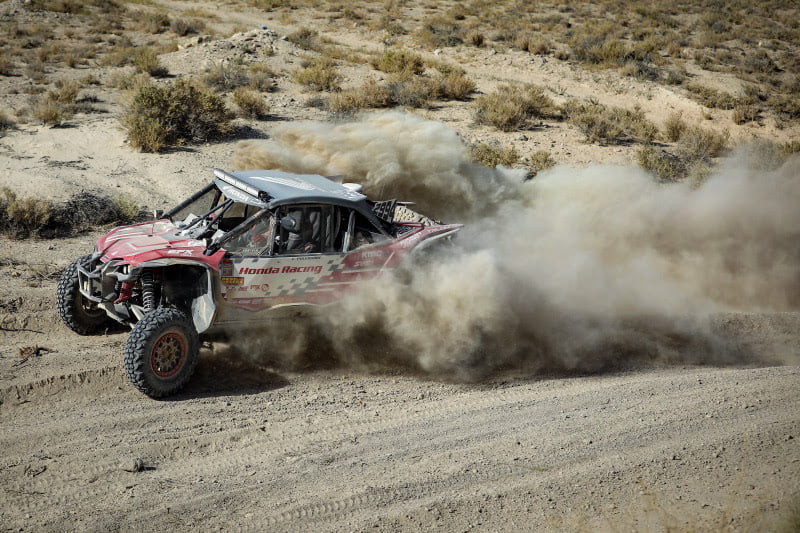 Jeff Proctor sums up the Talons’ race, “Vegas to Reno goes down as a success for the Talons. All the hard work paid off and we showed up – on-pace and on-point, as a team dedicated to the finish, no matter the adversity. A couple easy remedies and we’re ready for the next race.”

Up next for the Ridgeline and Talons is the SCORE Baja 500, starting in San Felipe, Baja, Mexico on September 26th.