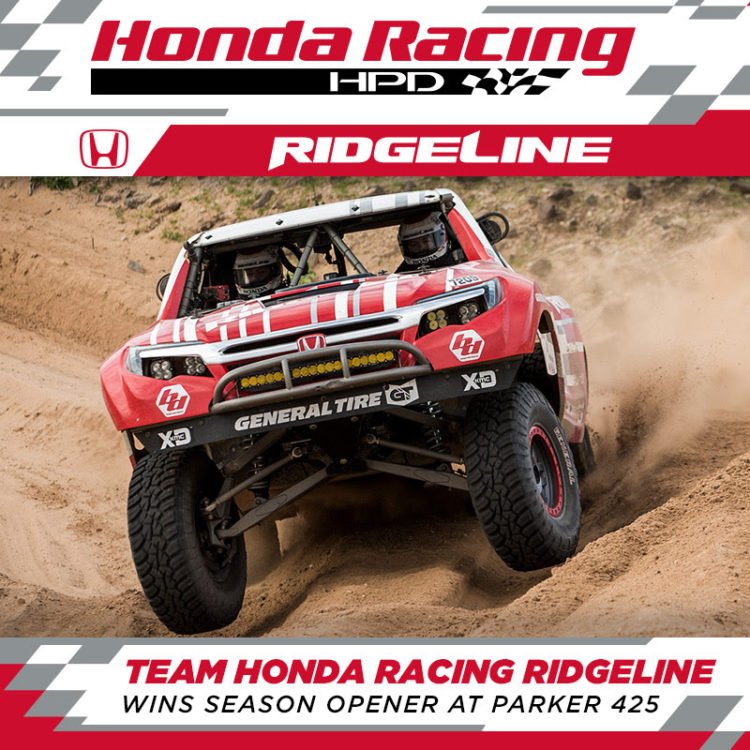 Team Honda Racing Ridgeline wins their season opener at the Best In The Desert Parker 425 in Parker, Arizona. After coming off of a 2018 season best, Team Honda continues the momentum by backing up their win from last year at the grueling Parker 425.

The Arizona desert nestled along the Colorado River hosts some of the most challenging off-road terrain in the sport. The difficulty of this race is often low winds and dry dusty conditions,  making for very little driver visibility. With a storm lurking on the horizon, the conditions appeared to be uncharacteristically ideal for Off-Road racing on Saturday morning as the green flag dropped. 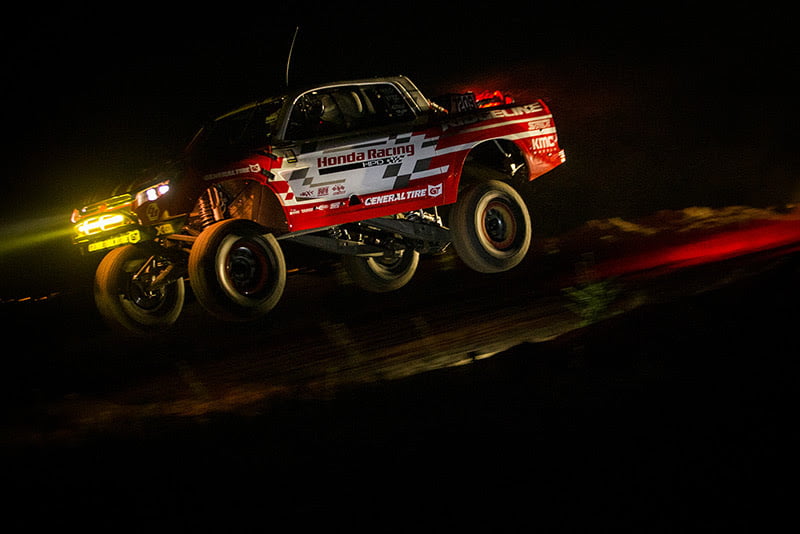 Team Honda drew the second starting spot as Driver and Team principal, Jeff Proctor and Navigator Evan Weller took the green flag. The duo got the hole shot off the start and headed out in the lead to battle for 3 laps on the 143 mile loop. The conditions were ideal for off-road racing with recent precipitation holding in the dust and unusually high winds blowing the occasional dust off the course. 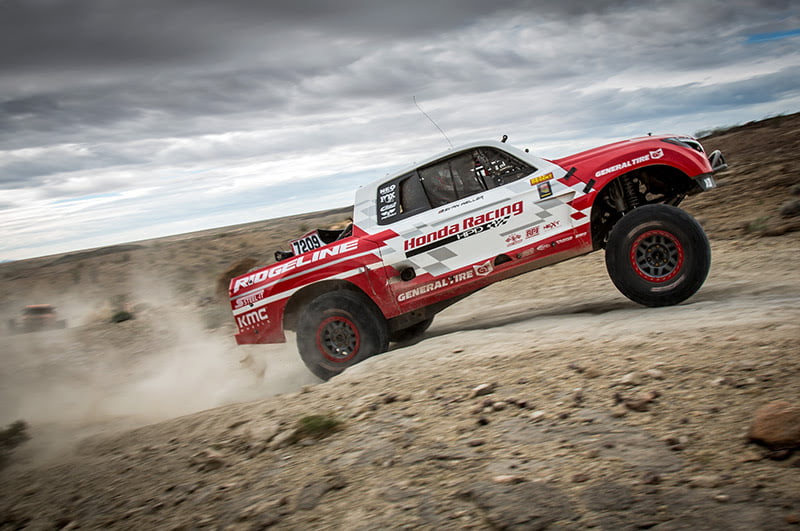 This clean air allowed the Baja Ridgeline to maximize the Honda Performance Developmenttuned 3.5L twin turbo power to pull away from their class of competitors. Proctor and Weller continued to lengthen their lead and click off miles heading into their first full pitstop at the end of lap one. After a regularly scheduled pit stop of 55 gals and fresh rear General Tires, the Ridgeline headed back out onto lap two. Lap two continued as planned with the team taking full advantage of the ideal conditions and clean air. “This Ridgeline was working so well today. We had a lot of fun pushing this Honda engine and FOX suspension to the limit” Said Weller. Proctor brought the Ridgeline in for a driver change with a 15 minute lead on their next closest class competitor. 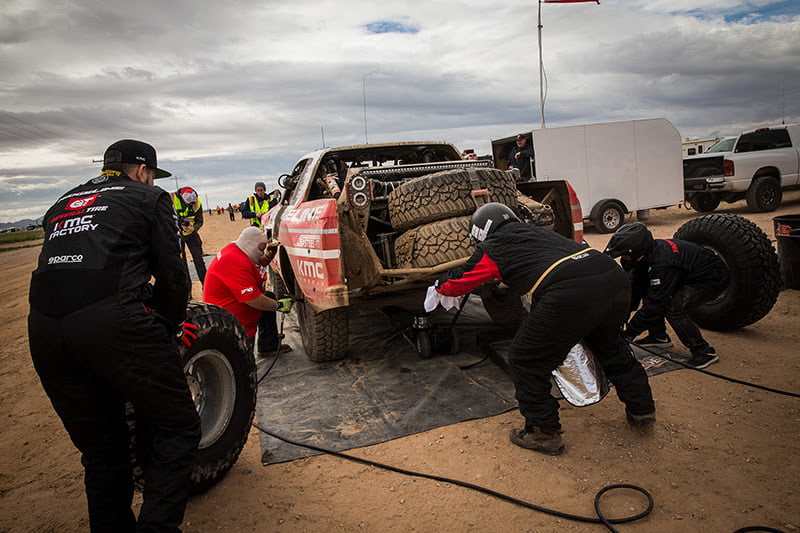 Pat Dailey took the wheel while Weller stayed in to navigate the final lap. Dailey and Weller executed their stint in the Ridgeline by preserving the race truck and holding their track position as the team communicated their split times. The Ridgeline race truck reached the checkered flag, taking the win in class 7200 (Unlimited V6 Truck) over second place by 16 minutes for a total time of 7 hours, 30 minutes and 58 seconds.

“I am incredibly proud of this entire Honda Racing Ridgeline Team! These endurance races require total commitment and months of dedicated preparation to pull off a win in this type of unforgiving terrain. Our team is in a really good place right now; good energy, great talent, and incredible synergy.” Said Team Principal and Driver Jeff Proctor. 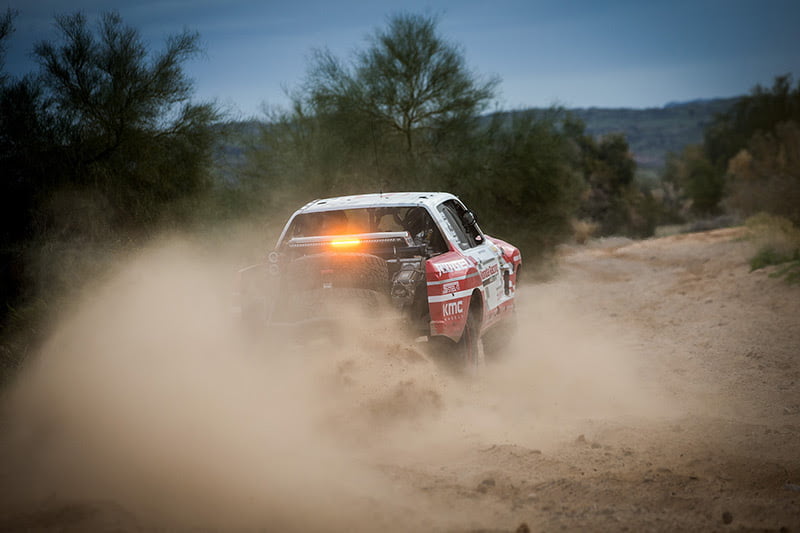 Team Honda Racing Ridgeline looks forward to taking this momentum next month to Las Vegas for The Mint 400March 6th-10th.

Today, Jeff has embarked on his most ambitious chapter of his race career – Partnering with American Honda on a Honda Performance Development (HPD) – Powered Factory Off-Road Racing Initiative. Jeff will not only pilot a custom Honda unlimited Twin Turbo off-road race vehicle but also direct and oversee the team’s entire race operation. Jeff will lead his team and Honda to the podium, bringing more high-level race teams to the exciting sport of off-road racing.