GRIDER GETS A STAGE PODIUM! 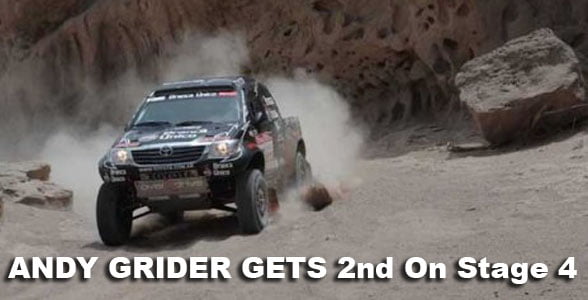 It was an especially difficult day for the Americans Robby Gordon and Johnny Campbell and team mate Nasser Al Attiyah. But overall good-guy and Baja ruler Andy Grider co-piloted the HILUX TOYOTA of Orlando Teranova (ARG) to a second place run today. Grider, who is universally respected in off road circles was the co-driver of Robby Gordon two years ago, so he was a strategic pick by Teranova.

Team SPEED suffered a puncture, bad alternator with a minor navagation error. Robby and Johnny were also tasked with pulling their new brother Nasser out of the Mud. The Qatari Madman was TOTALLY on fire (aka YALLA YALLA) in the early parts of the stage and completely in charge by minutes over closest competitor Stephane Peterhansel. Highlights of the days special showed Nasser going nuts and “losing the course” at one point. 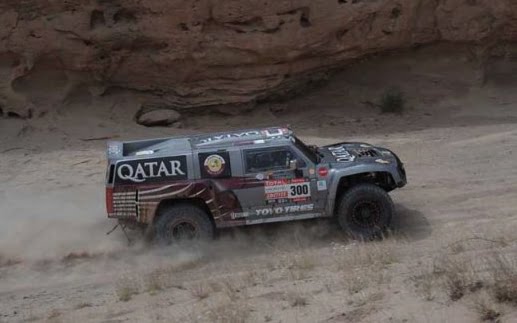 Johnny Campbell texted us from the very small town of Chilecito, Argentina which has a striking resemblance to parts of Baja such as Loreto.

“In the DAKAR things are going to happen, and remember, no one has a perfect DAKAR. I am looking forward to tomorrow’s stage. We will fight back until we are on top!”

With the American motorcycle contenders Jonah Street and Quinn Cody out of the DAKAR rally early, all eyes are turned onto the remaining American hopefuls including Grider.

America is so grossly underrepresented here in DAKAR that something must be done. It is really encouraging to see Grider rising up in the general standings after two solid stages and today’s 2nd place finish. Teranova/Grider now stand 18th on the rally.

In the bikes category, Cyril Despres (aka Frenchie) will have a tough week ahead as defending champion Mark Coma is making up time on Despres and this was shown today. Coma snipped his deficit by nearly one third today and tomorrow is the Chilecito to Fiambala’ route and SERIOUS SAND DUNES. Coma won in this area last year although traveling in the general opposite direction. No matter how you look at it, Coma will need to lead the field into the dunes, something that no one wants to do. Chances are, Coma will have his hands full tomorrow as he leads the pack while trying to make up another 8 minutes on Cyril with only 9 stages left until Lima. 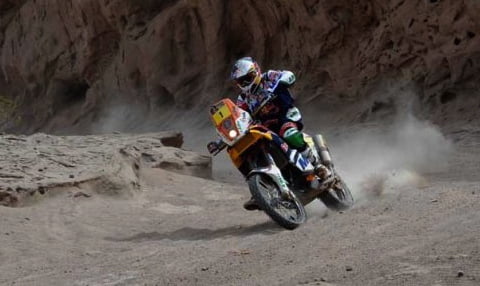 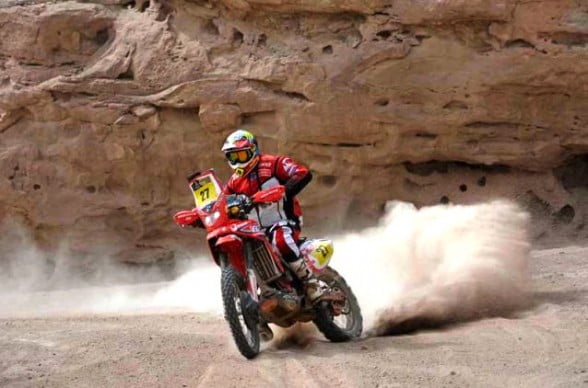