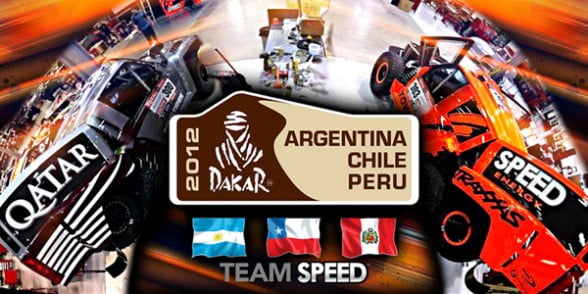 Charlotte, NC (December 16, 2011) –As Team SPEED and Toyo Tires® prepare for the 2012 Dakar Rally, we would like to highlight the true essence of the race through the next series of stories. We want our fans, sponsors and supporters to get an idea of the amount of preparation and work that is involved in participating in the Dakar Rally and to fully understand the evolution of man and equipment for “the world’s toughest race.”

Preparing for the 2012 Dakar Rally proved to be no different than in years’ past.  Robby Gordon’s Team SPEED and Toyo Tires® worked to perfect every inch of the specially-built HUMMER H3’s that will be air freighted to South America.  What started months ago came to fruition as the race vehicles were loaded and transported to Miami, Florida where they will board cargo planes to Buenos Aires, Argentina.

The specially-built Team SPEED vehicles were the final piece of the puzzle for the team’s quest for overall victory of this grueling 15-day event.  The Freightliner support vehicles, which are equipped with supplies, car parts and the equipment necessary to endure the event, were loaded onto container ships on November 3rd to make their 5,000 plus mile ocean journey to South America.

Team SPEED will again be fielding two race vehicles in the 2012 edition of the Dakar Rally, one for Robby Gordon and another for the 2011 Dakar Rally Champion, Nasser Al-Attiyah.  The race vehicles are built in-house with the combination of Gordon’s off-road team efforts and his NASCAR Cup team counterparts.  Being fully prepared before the vehicles leave the race shop is a priority in any team’s effort to win at Dakar.  Gordon himself spent countless hours getting the two race vehicles prepared to leave for the port.  “Everything is set in place for our equipment to be waiting for us in Buenos Aires; then it’s a matter of making all the parts and pieces work during the race”, Gordon commented.

2012 will mark Gordon’s seventh year as a team owner in the infamous rally-raid that will encompass three countries over a two-week period.  Gordon will be piloting his custom-made race vehicle sponsored by SPEED Energy; while Al-Attiyah’s vehicle is sponsored by his home country of Qatar.  “Going into my 7th Dakar Rally as a team owner and having a team-mate like Nasser Al-Attiyah is pretty exciting.  I feel like we’re more prepared than ever and knowing we have two race vehicles that are extremely fast and either one capable of winning the rally overall makes the anticipation of start that much greater,” says Gordon.

With only 17 days until the start of the highly anticipated 2012 Dakar Rally, Robby Gordon, Nasser Al-Attiyah and Team SPEED are getting ready to head south to Argentina with a goal nothing short of podium finishes.

About SPEED Energy– SPEED Energy is available in four flavors: Unleaded, Fuel, Ethanol and Octane, which provides the human machine with the fuel it needs to keep up with the SPEED of life. Each drink contains a potent energy blend of B-vitamins, caffeine, taurine and ginseng. SPEED is packaged in 12 ounce sleek cans that have a stylish black top and sexy body and are available in singles, four-packs, and cases.  SPEED Energy is available in the United States in major retailers, convenience stores, grocery stores, bars and nightclubs. For more information, please visit speedenergy.com.

Race Coverage– Follow Team SPEED during the 2012 Dakar Rally onwww.speedenergy.com as well as twitter and facebook at www.twitter.com/speed_energyand www.facebook.com/thespeedenergydrink.  Daily highlights from each stage can be viewed on the NBC Sports Network (formerly known as Versus) January 1st – the 15th at 1:30AM Eastern Standard time.  Please check your local listings on where to find the NBC Sports Network.

The SPEED Energy APP – featuring exclusive updates of Robby Gordon and his SPEED Energy / Toyo Tires HUMMER during the 2012 Dakar Rally.  Follow Robby as he competes in the world’s toughest race through Argentina, Chile and Peru.  Be the first to hear updates from the driver himself and get exclusive videos and photos during the team’s quest to win the coveted Dakar Rally.  You’ll be able to keep up with Robby during the rally from your iPhone or iPad!