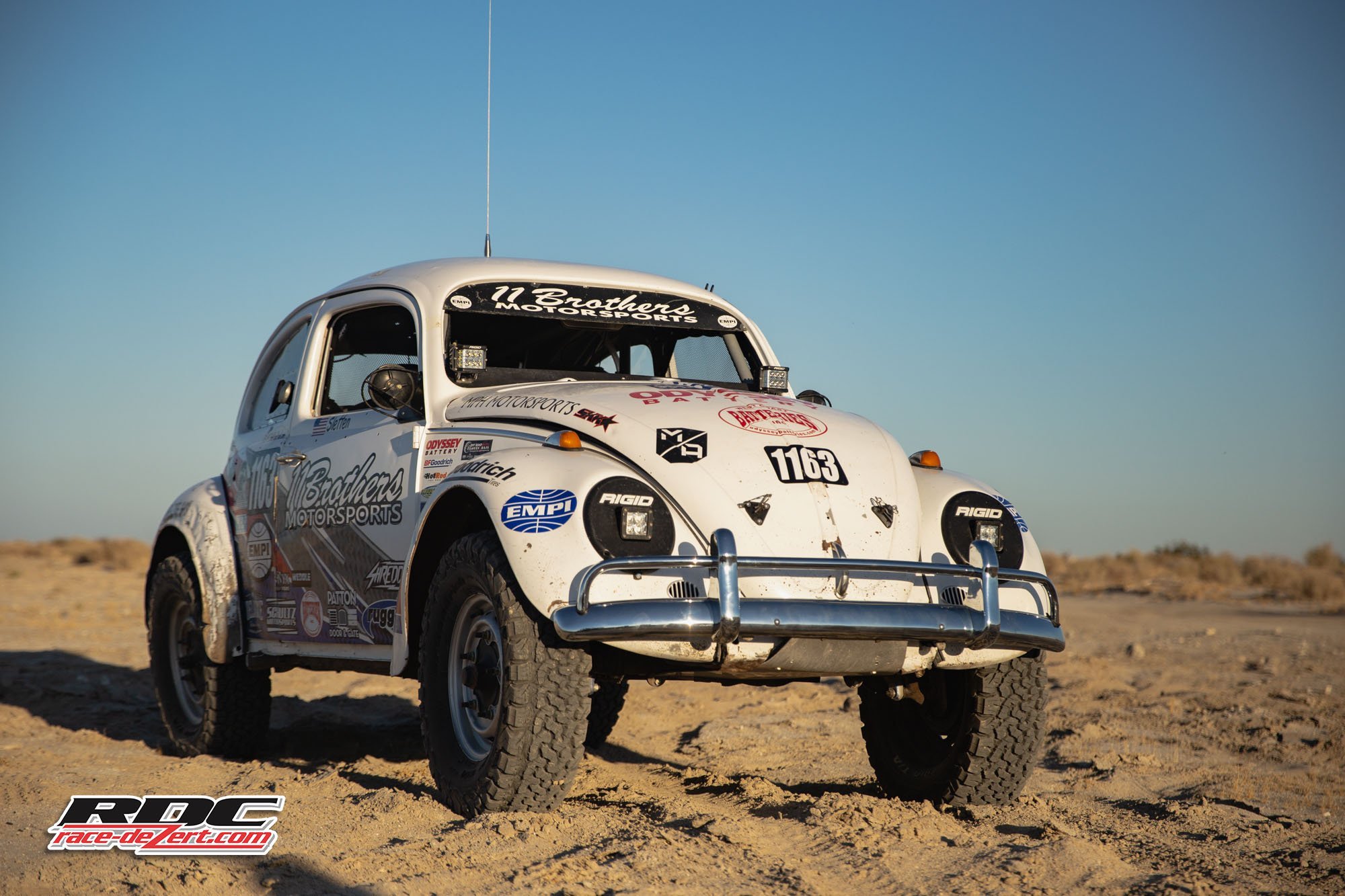 In off-road racing, there are many different vehicle classes to compete in, but the one that stays most true to its original form is Class 11. Class 11 is a stock production Volkswagen sedan class that competes in the S.C.O.R.E International Series. In other series, it is known as 1100 or Stock Bug, but for the sake of referencing it in this article, we will call it Class 11. It is important to recognize that we are using the term “stock” bug loosely; these are hardly your Grandma’s old Bug anymore. These are race cars. If you want to go racing on a budget and have fun doing it, then this is the series for you.
Let’s take a look at the anatomy Class 11, and what does it take to race Class 11? We met up with Timmy and Dennis Sletton from 11 Brothers Motorsports to see what they were all about.

They are no strangers to the world of racing Bugs in the desert. They have been racing for over four generations of family members. With their long history of racing, we thought they would be the perfect people to talk to about it.

As we previously mentioned, Class 11 or 1100 is a class designated for stock production Volkswagen Beetle. The rules are simple; you need a standard roll cage, safety equipment such as harnesses and fire suppression systems. In some series, you can even race with stock seats from your Grandmas Bug. This is the 11 Brothers most recent Class 11 race car, just one of many bugs they have laying around at their shop in the Salton sea. It started its life as a 1964 Volkswagen Beetle with a bare shell that was far from perfect. They gave themselves 30 days to build their car for the upcoming 2019 race, Rage at the River, presented by S.N.O.R.E. They stripped everything on it and got to work utilizing their tried and true roll cage system that they have been using for many years. They installed two Race Trim race seats and a 12-gallon JAZ fuel cell behind a custom firewall. Interior technology remains relatively simple, no speedos or any gauges in the entire car; instead, there are two lights where the speedo would typically go. The green light comes on if there is a sudden loss of oil pressure, and a red light means the alternator belt came off. The 11 brothers did this to keep simplicity, one less thing to go wrong when racing; it is a testament to how reliable they have built their car. After 31 days of wrenching and building the car two weeks later, Dennis’s brother died. And his name was Teddy. To commemorate his life, they would race the whole season with him—with his ashes in a miniature fuel cell half-clamped in the car. They affectionately named the car after him. 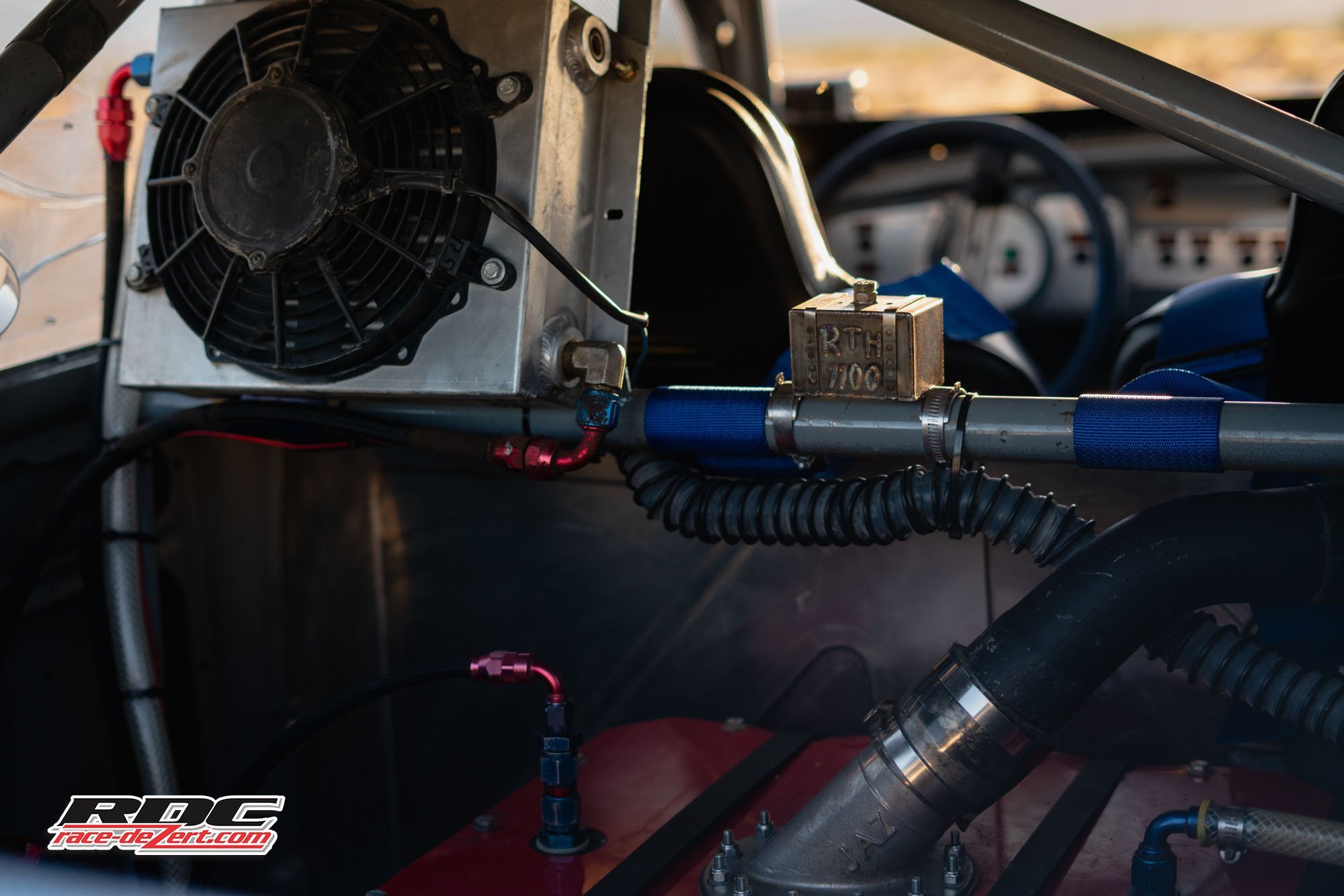 After racing the 11 Car a few times, they ran it in the brown, rust, primer, yellow scheme until they completely tore it down again to repaint it and prep it for the Legendary Mint 400.

1964 Volkswagen Beetle came equipped with 6 1/5 inches of travel in the front utilizing a link pin front end. The rear comes factory with a swing axle totaling to 9inches of travel. But the rules do allow large shock diameters and reservoirs for better shock cooling provided by King Off-Road Racing Shocks. In Class 11, one of the most important rules is the engine size, limiting the engine size to 1600 CC or 1.6L. But that doesn’t stop the 11 Brothers from teaming up with their sponsor, Empi US, to squeeze enough power out of the engine, adding up to 90 horsepower and 95 Torque. This 1600 is far from stock, allowing it to reach speeds up to 95 Mph. Thanks to their recent sponsor EMPI, they were able to run dyno tests on an engine stand to really test and tune the engine to its maximum capability. Considering this car came from Germany with under 50 Horsepower, and they can double that power utilizing a stock displacement engine, that is huge.

The Stock Bug racing class is thriving, and 11 Brothers 1964 Bug is one of many vehicles competing this year. You can catch them this weekend at the Empi Stock Bug shootout at Glen Helen Raceway in conjunction with M.O.R.E.