TOYOTA GAZOO Racing World Rally Team drivers Kalle Rovanperä and Sébastien Ogier are first and third overall in a top three covered by just 3.9 seconds at the end of the first full day of stages at the returning Acropolis Rally Greece. 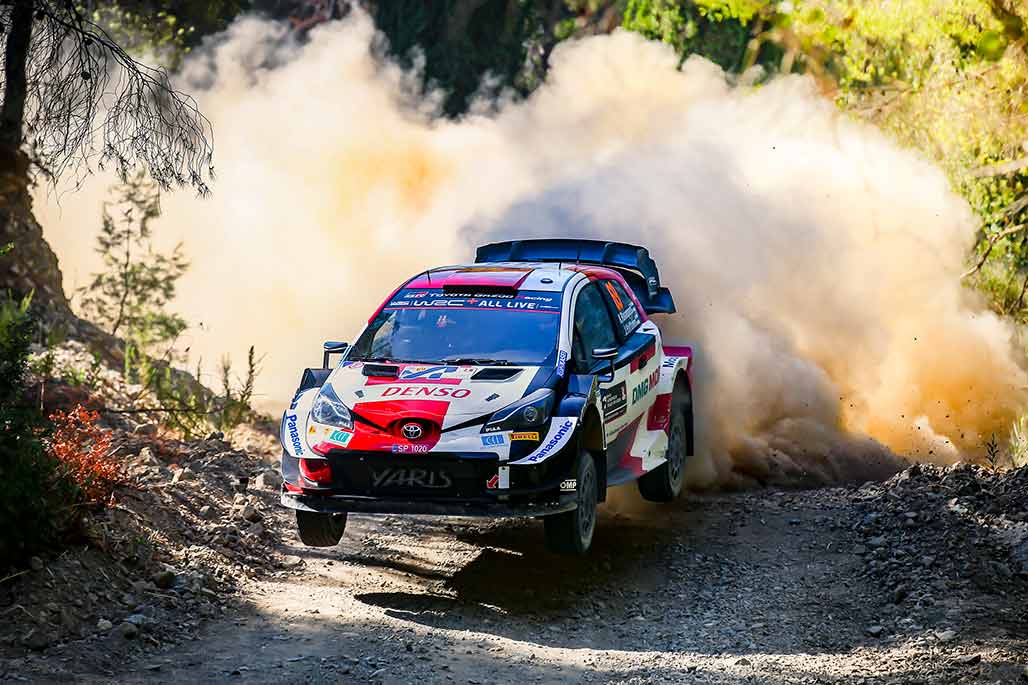 Following Thursday evening’s start ceremony and opening street stage in Athens, crews tackled a total of five stages without the opportunity for a full service before they returned to Lamia this evening.

Ogier retained his lead from SS1 with a strong performance in the day’s opening stage before Rovanperä moved ahead with stage wins in both SS3 and SS4. Ogier went on to take a stage win himself in SS5 and finished the day just 0.2s away from second overall, with Rovanperä finishing his first full day of competition in Greece in the rally lead by 3.7s.

It was a more difficult day for Elfyn Evans, who was third after the morning’s opening test before encountering an issue when changing gears. Despite losing several minutes, he and co-driver Scott Martin managed the situation well to complete the full day of stages and get the car back to service, where the team is working to resolve the issue fully for tomorrow.

Quotes:
Jari-Matti Latvala (Team Principal)
“I’m really happy with our performance today. The car and the drivers were really on the pace, much better than I could expect. We thought it would be very difficult for the guys opening the road with a lot of loose gravel on top of the surface, but it went much better than we thought. It’s really nice to see Kalle’s performance, attacking and taking the lead, and also Seb – it’s been a great drive from him. Elfyn started with fantastic speed as well, so we are very sorry for him that he has been suffering technical issues today. After the first stage he suddenly had a problem with the gearbox, we don’t know yet what caused it. It is really frustrating but he did a good job bringing the car back to service instead of just retiring, and with this sort of fighting spirit you can still get some points from this situation. Tomorrow is the longest day of the rally and it will be a challenge after the conditions in the recce, but I feel confident.”

Sébastien Ogier (Driver car 1)
“I am delighted to be third tonight and so close to the lead. Of course I was pretty pessimistic starting this day given our road position and the conditions, I was thinking it could be a tough one, but I think I did everything I could and managed to stay out of trouble. We were really on the limit in some sections and also a bit clever in some rough parts. It has been enjoyable to drive. Funnily enough the only stage I didn’t enjoy was the one that I won, SS5, where the grip was really inconsistent. I need to focus on myself and not on the fight for the win as we are in a good position in the championship and I cannot afford to go full risk. But today the feeling was great in the car, and if the feeling is good, I can go for it.”

Elfyn Evans (Driver car 33)
“Obviously it was not the day we hoped for today. We tried to do whatever we could to resolve the issue and obviously the team were working pretty hard behind the scenes to find a solution as well, but there’s only so much you can do in that situation, so it was a frustrating few stages this afternoon. The only positive is that we could get back to service tonight. The championship situation for me is worse than it was this morning, but at the end of the day, these things happen in rallying and it’s a really rare occurrence in this team: I don’t think I’d had one technical issue like this since I joined. I’m quite sure it’s fixable for tomorrow.”

Kalle Rovanperä (Driver car 69)
“It was a nice day today. We started more carefully, but then I could push a bit more and was enjoying it. It was really challenging conditions, with quite a lot of cleaning for us once others dropped back and we were running second on the road. Today when it was dry the conditions are more what I expected here, and the stage we did two times was really rough, so you need to take care of the car and the tyres. Tomorrow is going to be a completely different story after the weather we had earlier in the week: There is one stage that we did the recce for almost completely in fog, so it was really difficult to make the pacenotes, and there could be more grip changes and damp places.”

What’s next?
Saturday is the longest day of the rally, consisting of six stages and 132.56 competitive kilometres. It begins with a loop of four stages that is split into two by a tyre-fitting zone in Itea. Two of those stages – Pavliani and Eleftherohori – will then be repeated after a full mid-afternoon service in Lamia.