The TOYOTA GAZOO Racing World Rally Team’s young star Kalle Rovanperä produced another stunning performance on the longest day of the Acropolis Rally to win four stages and open up a lead of half-a-minute on his debut on the legendary event. With one day to go, the team still has two cars in the top three with Sébastien Ogier continuing to hold third overall. 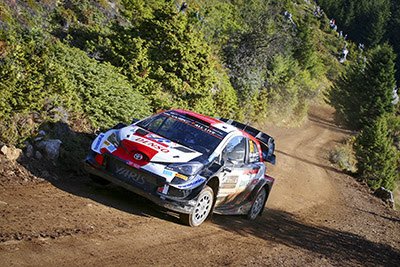 On Saturday the crews faced an initial loop of four stages, split into two by a tyre-fitting zone in Itea, before two of thoses tests were repeated following a mid-afternoon service halt in Lamia.

Rovanperä led a top three covered by just 3.9 seconds at the start of the day, but totally dominated the opening loop to claim four consecutive stage wins and open up an advantage of 39.7s over his nearest rival. After a naturally more conservative approach to the final two stages of the day, his lead stands at 30.8s with three stages remaining.

Championship leader Ogier continued the run of stage wins for the Toyota Yaris WRC when he was fastest in the day’s penultimate stage SS11 to keep the pressure on in the fight for second place. 9.4s separate him from the position overnight, with a margin of almost a minute-and-a-half to the driver in fourth position.

After suffering with a technical issue on Friday, Elfyn Evans was back at full speed and set consistently strong stage times despite less favourable conditions towards the front of the road order, and climbed from 16th place to seventh on the leaderboard in the space of four stages.

Quotes:
Jari-Matti Latvala (Team Principal)
“We are really happy with the performance today and to be leading the rally thanks to such impressive driving from Kalle here. Creating a 40-second lead over the first loop was pretty amazing when we normally see battles between tenths of a second. In the afternoon he took two spare tyres, as he wanted to play safe which was very wise and mature of him. He was still carrying nice speed. Sébastien has been doing a really good job as well in third place, and it’s still open for second place, even if Seb doesn’t need to attack for it for his own championship. Elfyn did a good consistent job also after his issue yesterday. Now let’s see what tomorrow brings.”

Sébastien Ogier (Driver car 1)
“This morning I was pretty consistent. Not extremely fast, but it was good enough to make our third place more secure from behind, which was the main target for the day. If we can finish on the podium tomorrow it will be another big step to the title. Kalle was extremely fast this morning and took a big lead, so well done to him for a very strong day. The afternoon loop was better for me. It’s always important to keep a bit of pressure on, we are not that far from second place. Tomorrow it will not be wise to take more risk but with many kilometres still to go, things can always happen. Those stages will be with all-new pacenotes for everybody and we recceed it mostly in the fog, so it won’t be easy.”

Elfyn Evans (Driver car 33)
“It was a quite OK day today and I enjoyed the driving to be honest, even if it’s quite difficult when you’re no longer in a proper fight. Still, we had a target to move into the best overall position possible and from that side the goal of the day was achieved. I don’t think there’s a chance to climb up any further providing those ahead don’t have any trouble now, but we want to try and bring those points home tomorrow and add to the tally in the Power Stage if we can.”

Kalle Rovanperä (Driver car 69)
“It was really enjoyable for us on the first loop of stages today. They were four difficult stages and I was a bit surprised that the time gaps were so big, but I also felt that we did a good job in the car. We also had a bit of a different tyre choice to the others and that was good for us: Overall I just had a bit more confidence on the hard tyres. For the second loop we made some setup changes to gain a bit of protection for the rough conditions, and we lost quite a bit of traction, but it was still quite good, and we were being wise and not doing anything stupid. There is still a long way to go to the end of the rally, so let’s see what we can do tomorrow.”

What’s next?
The final day of the rally is made up of three stages in total, including the longest of the rally: the 33.2 kilometres of Pyrgos. This runs bewteen two visits to the famous Tarzan test. The first will be 23.37 kilometres long and the shorter second run of 12.68 kilometres will host the rally-ending Power Stage.