Epic triumph for Rovanperä and the Toyota Yaris WRC in Greece

TOYOTA GAZOO Racing World Rally Team’s Kalle Rovanperä has claimed a second outstanding FIA World Rally Championship victory in three events after conquering the legendary Acropolis Rally in Greece at his first attempt. Sébastien Ogier completed a double podium finish for the Toyota Yaris WRC, strengthening both his and the team’s positions at the head of the championship standings. 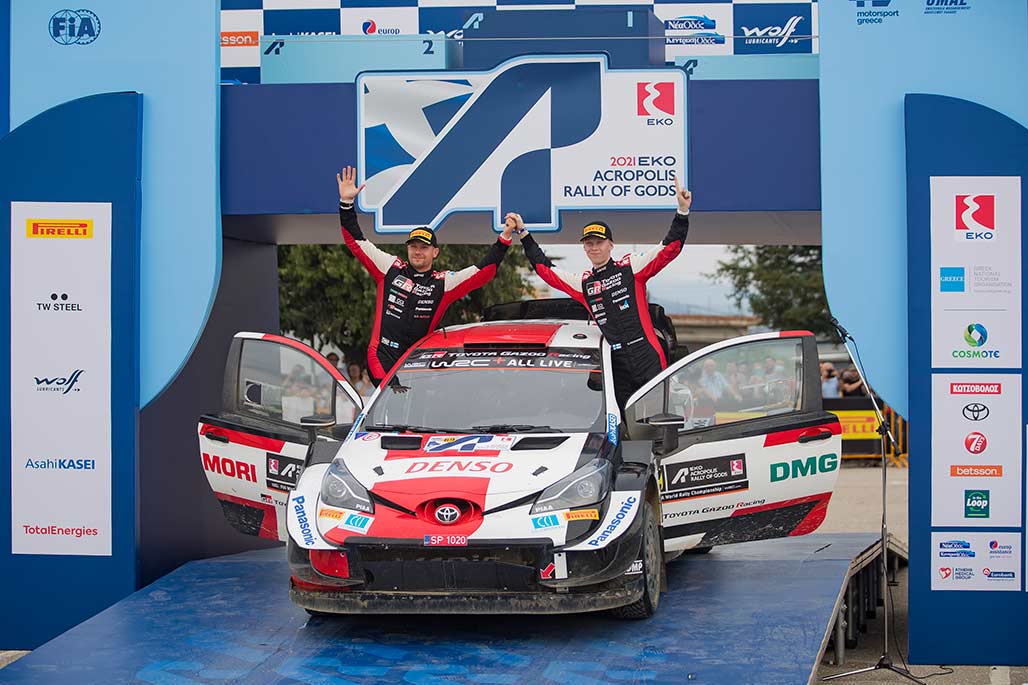 On the return of the WRC to Greece for the first time since 2013, Rovanperä and Ogier formed part of a top three covered by just 3.9 seconds at the end of Friday. A storming start from Rovanperä and his co-driver Jonne Halttunen, in which they won all four stages in the opening loop, allowed them to make a gap to their opposition, and they led by half a minute going into the final day.

Rain brought challenging conditions for the final day, but Rovanperä produced an incredible stage win in the day’s opening Tarzan test, completing it 14.1s faster than anybody else despite having a mixture of hard and soft tyres fitted to his car. Rovanperä then went on to seal the victory in style on the shorter second running of Tarzan with the fastest time in the Power Stage.

The Toyota Yaris WRC locked out the top three places in the Power Stage, with Elfyn Evans second fastest and Ogier third.

After their closest championship rivals hit trouble on Friday on the notoriously gruelling stages, Ogier and co-driver Julien Ingrassia focussed on securing a valuable podium finish while also keeping the pressure on the crew in second. With his sixth top-three finish of the season, Ogier now leads the drivers’ standings by 44 points with three rounds remaining.

Delayed by a technical issue on Friday, Evans and co-driver Scott Martin produced a strong fightback to take sixth overall with their fantastic run through the Power Stage. Evans remains second in the drivers’ standings.

Thanks to a fifth double podium result of the year and the bonus points from the Power Stage, the team has increased its manufacturers’ championship lead to 57 points.

Quotes:
Akio Toyoda (Team Founder)
“Kalle and Jonne won the rally by leading it ever since SS3. They kept driving strong throughout the event and their Power Stage performance was also amazing! Kalle’s first victory in Estonia set a new record as the youngest WRC winner after Jari-Matti, and he secured a podium in third at the following Rally Ypres, and now he won another rally in Greece. I am so happy that he has become such a reliable driver. He already surpassed his father’s record by winning in WRC twice. Congratulations!

Our win in Greece is of course thanks to Kalle who keeps learning and improving day by day, but I would also like to thank everybody in the team who supported the crew. This season, to cope with the COVID situation, some engineers remain in Finland and they keep improving how they support the team remotely. During this rally, data engineers in Finland found problems on Kalle’s car at an early stage, which enabled the crew to carry on without the problem becoming serious.

Seb and Julien secured important points toward the championship. It was great to see the two crews on the podium, but I’m sorry for Elfyn and Scott that they were not able to drive as they wished because of to a technical issue. We will continue investigations and make improvements.

The next event is Rally Finland, our home event. I hope to see smiles from all the crews in Finland, and I’m sure that all the team members, led by Jari-Matti, will make it happen. I appreciate our fans’ continued support there as well.

P.S.
Takamoto couldn’t start the rally this weekend. The unfortunate things continue as Rally Japan, which we were looking forward to, has also been cancelled. I really hope he can reset his mind and enjoy driving to the maximum in Rally Finland. His father also had a rally this weekend in Japan, so he put in maximum effort also for Takamoto and won it. I send congratulations to another Katsuta for this weekend and I hope I can congratulate both Katsutas next time.”

Jari-Matti Latvala (Team Principal)
“This was a weekend where we didn’t expect to win. I was really happy to see the performance from the start from all of our drivers. Kalle especially showed amazing speed and it was great to see how calm and mature he was the whole weekend. Sébastien once again did a great performance, driving like the champion he is and gaining the points both for his own championship and for the team. Elfyn unfortunately had a problem in the beginning of the rally, but he came back and did an amazing performance in the Power Stage, so I’m really proud of all our drivers.”

Sébastien Ogier (Driver car 1)
“This is a very good result for us. The target this weekend was to maintain the lead we had in the championship and we actually increased it, which is very positive. I think we did a very clever rally. The conditions were challenging all the time. Obviously I was not in the same pace as Kalle, he was really flying and on the next level compared to everybody, so congratulations to him for a well-deserved win. In the position I was in in the championship after Friday, my mindset was not to risk everything to win the rally, so I’m very happy with my third place.”

Elfyn Evans (Driver car 33)
“This was not our weekend but these things happen in rallying and it’s been very rare at this team to have an issue like we had on Friday. The feeling in the car was generally quite good. Getting sixth place in the end today was a bit of a gift with an issue that somebody else had this morning. Maybe it was not a perfect run on the Power Stage for us, but four bonus points is still a good addition and at least we managed to salvage something from the weekend.”

Kalle Rovanperä (Driver car 69)
“I’m feeling really good to win here in Greece. It was a really tough rally to be honest, a long week with a lot of stages to recce and long nights watching the videos, so I feel really happy to be at the finish with this result. I felt good on Friday already, and then we did some setup changes to the car because the stages on Saturday were different, and I felt even better with the car. It came quite nicely, I could enjoy the driving a lot. A big thank you to the team, everybody did a great job and the car was running without issues. Hopefully we can take the same speed to Finland.”

What’s next?
Rally Finland will be run for the first time in over two years on October 1-3. The team, which has its headquarters close to the service park in Jyväskylä, has won the three previous editions of its ‘home’ rally, but the autumn date could bring different conditions and characteristics to an event known for high speeds and big jumps.