Menu
Log in
Register
Install the app
You are using an out of date browser. It may not display this or other websites correctly.
You should upgrade or use an alternative browser.
Arctic Rally Finland: Day 2

Rovanperä keeps the heat on for TOYOTA GAZOO Racing

Kalle Rovanperä is up to second place and continues to keep the pressure on heading into the final day of Arctic Rally Finland. Like Rovanperä, Elfyn Evans also won a stage for the TOYOTA GAZOO Racing World Rally Team on the longest day of the event and remains in fifth overall. 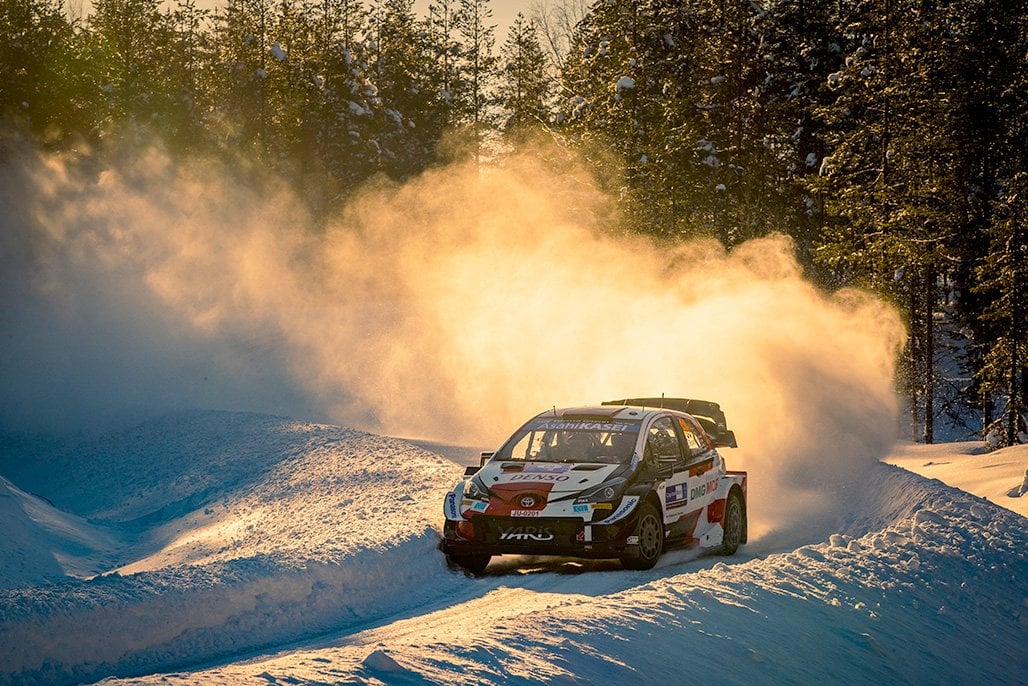 Rovanperä moved up into second place on the second stage of the day, Kaihuavaara, when Evans led a 1-2-3 for the Toyota drivers. Rovanperä went on to post the fastest time on the repeat stage in the afternoon and completed the day 24.1 seconds from the lead. Evans is 10.1s away from the driver in fourth.

Hindered on Friday’s opening stages by running first on the road, Sébastien Ogier also showed good pace to lift himself up from ninth to sixth on the leaderboard. Unfortunately, he went off the road and into a snowbank near the end of the day’s final stage, but will restart tomorrow.

Driving a fourth Toyota Yaris WRC as part of the TGR WRC Challenge Program, Takamoto Katsuta has also been part of the close fight for sixth and is now seventh going into the final day.

Quotes:
Jari-Matti Latvala (Team Principal)
“Today we have seen stages where we have been very strong, and then there have also been some stages where we haven’t been so strong. But we go into the final day with Kalle having a very tight battle for second place, and that’s going to be very interesting: I believe the stage should suit his driving style so I hope that he can keep the position. For Elfyn it will be more demanding for him to gain a position in his fight, but we want to get as many points as we can. On the last stage, Seb unfortunately hit the snowbank with the rear and the front of the car went deep into the snow and he couldn’t get it back. But he will restart tomorrow.”

Sébastien Ogier (Driver car 1)
“Up until the last corner of the last stage it had been a strong day for us honestly compared to our start position. This morning with the colder temperatures the grip was not too bad and we could set some good times. I think we were doing a good job but unfortunately in motorsport every corner counts and the day is never over until it’s over. It’s a shame: We had made a lot of effort to climb up the rankings and now all that effort is gone. But there will be better days ahead for us for sure.”

Elfyn Evans (Driver car 33)
“I had a slow start this morning on the first stage, I think I was too careful and was a bit frustrated to have given away so much time. After that we seemed to find something: I was maybe being a little bit more aggressive and that seemed to work better. But unfortunately in the afternoon we lost a lot of time on the first one again, and struggled with tyre wear and the general feeling. I feel I should have managed it better and didn’t take enough chances. Tomorrow we have to keep at it. It’s not such a huge gap to fourth place so we’ll be out there to do our best.”

Kalle Rovanperä (Driver car 69)
“This morning I didn’t have such a good feeling in the car, but we made some small changes during the loop and it got better. Then in the midday service we made some bigger changes, and this really helped in the conditions that we faced in the second loop, so I could manage the tyres and everything quite well. The tyre choice was tricky and a bit of a gamble. Fitting the new tyres in the middle stage was the wrong decision, so we lost a bit too much in the last stage. The approach for tomorrow is quite clear: We just have to push and try to be as fast as possible.”

What’s next?
Arctic Rally Finland concludes on Sunday with two passes of the Aittajärvi test, 22.47 kilometres in length. The second run will serve as the Power Stage with bonus points on offer for the fastest times.