Ogier and Evans fighting for the lead for TOYOTA GAZOO Racing

TOYOTA GAZOO Racing World Rally Team duo Sébastien Ogier and Elfyn Evans are both within eight seconds of the leader after a demanding first day on the all-new Croatia Rally: round three of the 2021 FIA World Rally Championship season. 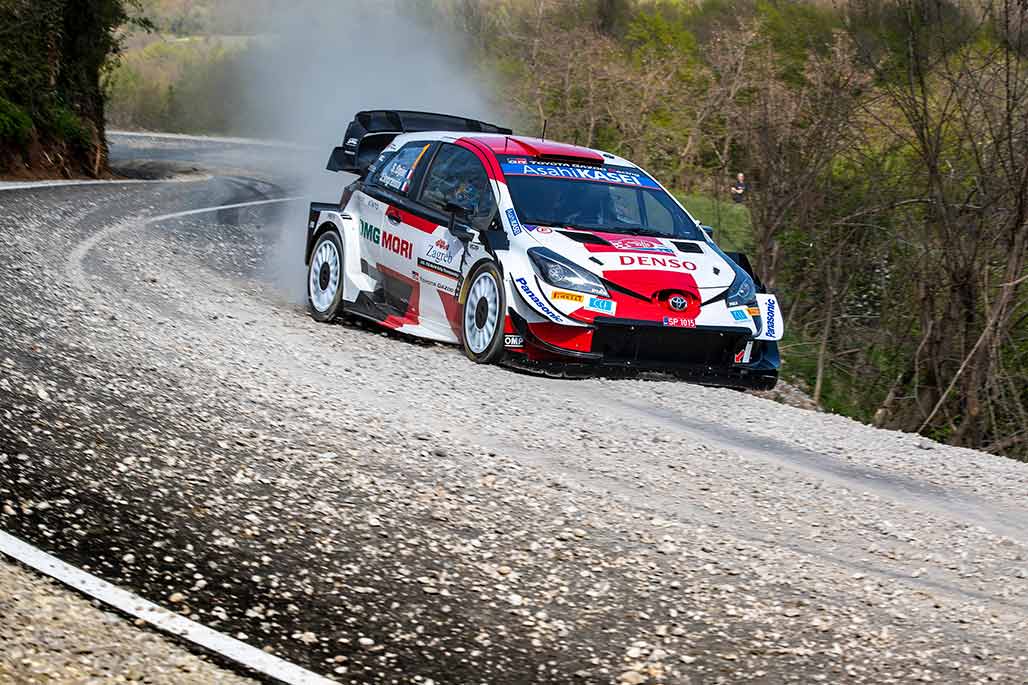 On the WRC’s first pure asphalt rally since August 2019, numerous surface changes and varying grip levels have made the unfamiliar roads close to the capital city Zagreb especially challenging for the drivers. Two loops of four stages made up the opening day, where Ogier and Evans proved to be closely-matched in the stage times behind the wheel of the Toyota Yaris WRC.

The two Toyota drivers actually shared the fastest time on the third stage of the morning. Ogier then went on to claim a hat-trick of stage wins during the afternoon, in doing so surpassing the career milestone of 600 fastest times in the WRC. He finished the day 7.7 seconds from the rally lead with Evans just 0.3s behind him.

The team’s other driver Kalle Rovanperä came into the rally as the youngest ever leader of the WRC standings, but his event ended early when he went off the road on a slippery corner in the morning’s first stage. He and co-driver Jonne Halttunen were unhurt, but damage to their car’s rollcage means they cannot take any further part this weekend.

Driving a fourth Yaris WRC as part of the TGR WRC Challenge Program, Takamoto Katsuta has set competitive times and was running in seventh place before an overshoot and then a stall cost him some time. He sits in ninth place overnight.

Quotes:
Jari-Matti Latvala (Team Principal)
“We can generally be happy at the end of today. The competition is very close and Sébastien and Elfyn have been catching the leader, and the afternoon loop especially was really good for them. The morning loop had been a bit more difficult – as expected, the stages here are very demanding for the drivers with a lot of grip changes – but we made some little modifications to the setup in service and I can see now that they are feeling a lot more confident with the car. Overall I think we are in a very good position for tomorrow to challenge for the lead. Unfortunately, Kalle had a very short experience of this event. It was a very tricky place where he went off and this sort of thing can happen: The most important thing is that both he and Jonne are OK. Now they just need to put this behind them and look forward.”

Sébastien Ogier (Driver car 1)
“I am pleased with how well we reacted today after a difficult start this morning. We had a big moment on the first stage on the same corner that Kalle went off: I was surprised that this corner was even more slippery than the rest and we went a bit wide, and unfortunately we had a tyre come off the rim at that point so we lost some time there. I also went with a setup this morning that I had not tried in our pre-event test and was not super-happy with it, but then I went back to something I knew and immediately felt better. We had a good afternoon, we are in the fight and now we have to keep that momentum up tomorrow.”

Elfyn Evans (Driver car 33)
“It’s not been a perfect day to start the rally but overall it has been pretty solid. I think the morning loop was pretty good in some very challenging and changeable conditions. This afternoon was not bad, but I was just losing a few seconds in every stage more or less, and especially relative to Seb who had a good afternoon. Overall the car has been working well and we have a few ideas to maybe try and improve things for tomorrow, and of course we will keep fighting.”

Kalle Rovanperä (Driver car 69)
“The first stage was really tricky and really slippery for everybody and this was creating a bit too much understeer. Near the end of the stage on the last downhill section I was still trying to push a bit. In this one fast right-hander it was especially slippery: The grip just disappeared, I had a bit too much speed and we went off the road and had quite a big crash. The good thing is that myself and Jonne are OK. I’m really sorry for the team. It was my mistake and I need to learn from this for the future.”

What’s next?
Saturday is the longest day of the rally with 121.92 competitive kilometres. The action takes place in the same area as Friday to the south-west of Zagreb and follows a similar format: a loop of four stages run twice either side of midday service.