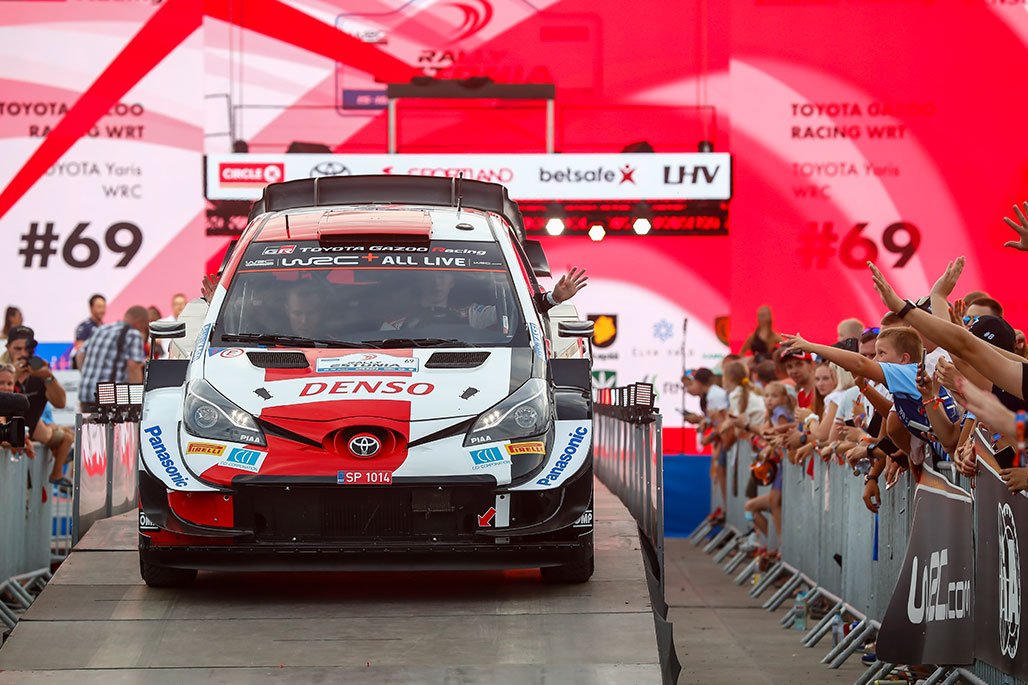 Shakedown took place this morning and was an opportunity for the drivers to get up to speed on the fast gravel stages and to refine their car setups ahead of the rally. After three runs over the shakedown, Rovanperä recorded the fastest time, with team-mates Elfyn Evans fourth and Sébastien Ogier fifth. Third quickest was TGR WRC Challenge Program driver Takamoto Katsuta in his Yaris WRC.

The first stage of the rally took place adjacent to the service park in Tartu and Rovanperä recorded the fastest time by just 0.1 seconds. Ogier was 10th overall, but only 1.2s away from Rovanperä’s time, with Katsuta and Evans the next of the World Rally Cars behind.

Quotes:
Jari-Matti Latvala (Team Principal)
“We’re happy with the opening stage this evening, as the guys did good runs with no mistakes. The stage was cleaning and improving as the cars went through but all of the gaps are still small and we’re ready to start the rally proper tomorrow. In the hot and dry weather here, we can expect our first two cars on the road – Seb and Elfyn – to suffer tomorrow from the amount of loose gravel on top of the surface. But Kalle is in a good position to fight and we could see in shakedown that he had good speed – as did Takamoto too. Generally everybody was happy after shakedown so we know the car is good for the rally and I really hope we can challenge for the victory here.”

Sébastien Ogier (Driver car 1)
“We know we will have a tough job ahead of us opening the road this weekend: In shakedown we saw the road evolve quite a lot with each run, and in the opening super special it was already very slippery. But we’ll give our best like always and see what is possible. This is definitely a very fast rally, but the new stages we have this year are challenging with much narrower sections in the forests, and I think the first pass could be a bit tricky. It’s a longer event than last year, and we’re definitely much more prepared this time, so let’s see what we can do.”

Elfyn Evans (Driver car 33)
“Tonight’s short super special stage was quite tight and twisty, but it was good to get started. The general feeling in the car in shakedown was good. We worked on some setup options for the second pass of stages and it all felt good, so I’m looking forward to start the rally for real tomorrow. There is definitely a real mix of stages in this year’s rally: some more narrow and technical sections than perhaps we’ve seen in the past but still some very fast places too, of course. We’re ready to give it our all and fight for the top positions.”

Kalle Rovanperä (Driver car 69)
“Stage one was really tricky, so the plan was just to get through it without any mistakes, but we also managed to do a quick time. I had a really good feeling with the car in shakedown. This year there’s a lot of new stages and many of them are quite narrow and technical, so it’s not so fast all the time and you have to be really precise with the pacenotes. It’s really important for us to have a clean race and hopefully fight among the top places.”

What’s next?
The first full day of the rally, Friday consists of a loop of four stages which is repeated after mid-day service. All four stages featured in the 2020 event but have all been revised for 2021, with the Kanepi test running in the opposite direction.