Rovanperä out front in the Toyota Yaris WRC

Kalle Rovanperä leads Rally Estonia for the TOYOTA GAZOO Racing World Rally Team at the day of the first full day of competition on high-speed gravel stages. Sébastien Ogier also enjoyed a strong Friday and is fourth overall, with Elfyn Evans just one position behind in fifth. 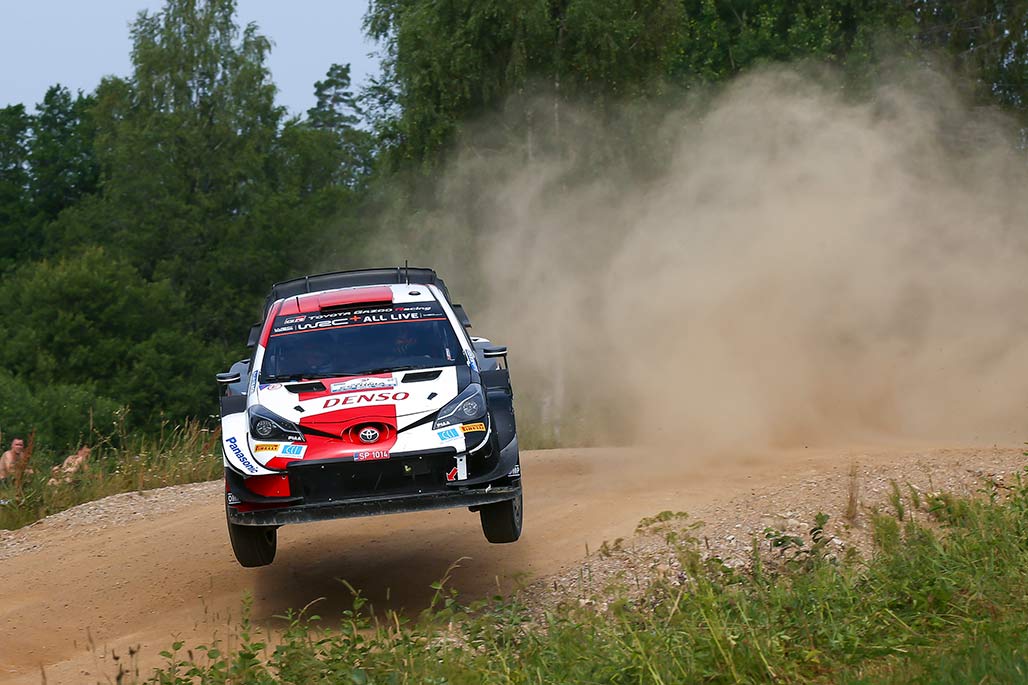 Already leading the way after Thursday night’s opening super special stage, Rovanperä was briefly demoted to third after the first of Friday’s eight forest stages, but moved back in front after being fastest on the remaining three tests of the morning loop. He maintained his speed in the afternoon, winning three more stages to increase his advantage, although the fight with his nearest rival remains close with just 8.5 seconds separating them.

Once more, as championship leader, Ogier was tasked with running first on the loose gravel roads but was still able to battle well, climbing up into third position by the end of the morning loop. He finished the afternoon in fourth, only six seconds away from the podium places. Running second on the road, Evans was closely-matched with Ogier during the day, and although he lost some time to an overshoot at a junction during the morning, he ended the day 15.7s behind Ogier.

TGR WRC Challenge Program driver Takamoto Katsuta was running in third overall after SS4 but retired on the following road section as a precaution after co-driver Dan Barritt reported neck and back pain following a heavy landing from one of the many large jumps. After being taken to hospital for further assessment, which found nothing was broken, Barritt has been advised to rest and the pair will therefore take no further part in the rally.

Quotes:
Jari-Matti Latvala (Team Principal)
“It has been a very good day for the team in general. This is like a second home rally for Kalle and we knew he’d be fast here, but he has been even better than I expected today. So far it’s been a very mature drive under pressure and it’s good to see, especially after the tough run he’s been on in recent events. With the hot weather there’s been a lot of loose gravel, so Seb has done a really excellent performance as the first car on the road, and Elfyn is not too far behind him even though he lost some time in the morning. Finally, it was very unfortunate that Takamoto and Dan’s rally had to end so early, but the most important thing is that Dan is fine.”

Sébastien Ogier (Driver car 1)
“I am extremely happy with my day today. I have been on the limit, the car was working well and no mistakes. I couldn’t really have expected better from this day. There was very loose gravel so being where we are tonight, only six seconds off the podium, is really good. I’ve enjoyed the day. Now we have to carry on with the same rhythm tomorrow. It will be challenging with new stages and some different characteristics, so it won’t be easy, but let’s see what we can do with a much better road position.”

Elfyn Evans (Driver car 33)
“It’s not been the day we wanted. This morning I made a couple of clumsy mistakes in the second stage and gave away quite a lot of time, and in this rally you can’t really afford to do that. Apart of that, it’s been going OK but I haven’t been fully at one with everything. The car has the pace to do it but it’s just not quite clicking for me at the moment. We’ll make some minior changes tonight to try and find some more confidence, and I’m looking forward to a new challenge tomorrow.”

Kalle Rovanperä (Driver car 69)
“It has been a really nice day today. We were pushing really hard all the time and almost always on the limit. I did start a bit more carefully in the first stage this morning, and then I tried to clean up the driving and be fast all the time. It’s been a nice battle, I’m really enjoying it. The gap is really small still and I’m sure that tomorrow will be another big fight. Generally the feeling is good, and I hope we can do something with the setup to find more grip for the second pass than we had this afternoon.”

What’s next?
Saturday is the longest day of the rally with 132.18 competitive kilometres and a total of nine stages. A loop of four new stages to the WRC will be run twice before a return to Thursday night’s Tartu super special rounds out the day.