Toyota Yaris WRC driver Kalle Rovanperä pulled away from the opposition on the longest day of Rally Estonia to take a lead of 50.7 seconds into tomorrow’s closing leg as he and co-driver Jonne Halttunen look to secure their maiden WRC victory. 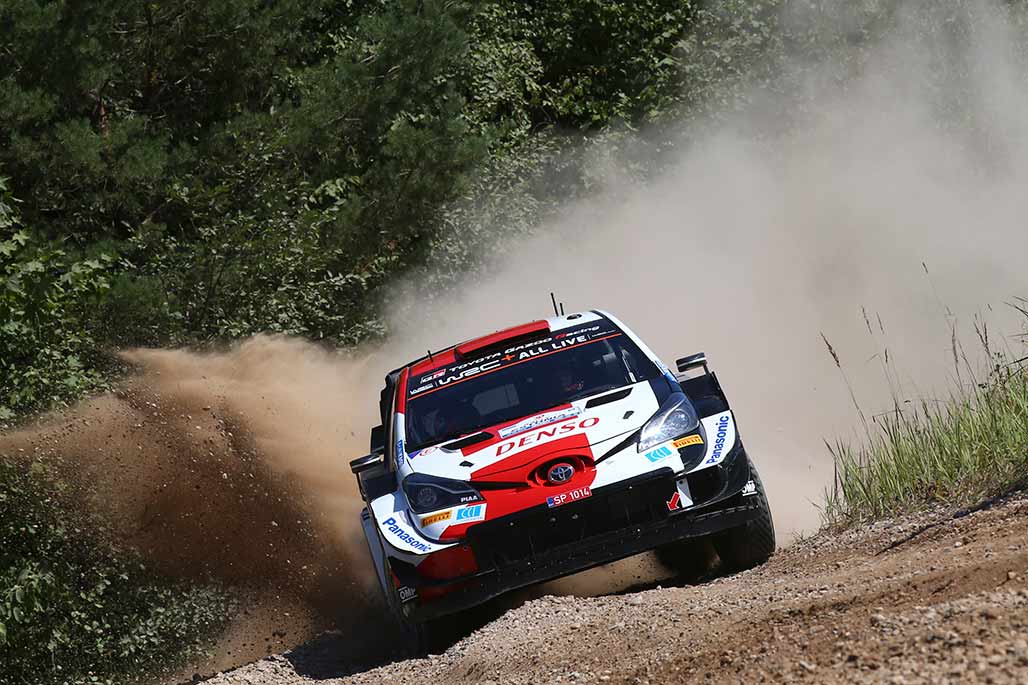 Rovanperä had won six of Friday’s eight stages but the battle had been close with his nearest rival, with his advantage standing at a relatively slim 8.5 seconds heading into the second full day of competition. However, the 20-year-old from Finland began the day with a dominant performance in SS10, where he was over 10s quicker than anyone else over the longest stage of the rally, the 23.53-kilometre Peipsiääre test. By the end of the morning loop of four stages, his lead was up to 35.7s.

The repeat loop in the afternoon was made extra challenging by the formation of deep ruts through the soft and sandy stages, but Rovanperä continued to extend his advantage while also taking care of his car.

Rovanperä’s team-mates Sébastien Ogier and Elfyn Evans have continued to be involved in a battle over third position. Ultimately they remained fourth and fifth respectively, with Ogier ending the day 17.9s away from third and Evans a further 23.4s behind him.

Quotes:
Jari-Matti Latvala (Team Principal)
“Kalle could not have been better today: It was a 10-out-of-10 day from him. To attack on the most difficult stage of the rally this morning and take the advantage that he did was really good. Then he was able to keep up the speed until the afternoon when he could start to back off a bit. He has managed it really, really well, and he has a good advantage now which means that he doesn’t need to take any risks. As for Seb, he tried to keep the pressure on for the podium, but was not so comfortable in the rougher conditions today, and that is understandable when he is thinking about the championship. Elfyn was improving his speed throughout the day and once again he’s doing a very consistent job.”

Sébastien Ogier (Driver car 1)
“Yesterday I was really happy with the job I did; today it was not my best day ever. But we are on target because I stayed ahead of Elfyn and he is my nearest rival in the championship. This morning I was too careful and driving a bit too much with my head, but then this afternoon the conditions were very difficult with big ruts in the first two stages. When you want to be fully in control and not take any risk, these are not the conditions you want to have, so I preferred to take it easy. Most importantly we are still there in a good position for the championship and tomorrow we have the chance to get some extra points from the Power Stage.”

Elfyn Evans (Driver car 33)
“Today I was still trying to find the sweet spot and I think we continued to make some small steps with the setup during the day, and generally the feeling was better in the afternoon. We haven’t got a lot to show for that in terms of improving our position in the rally, but at least we’re taking some steps in the right direction and that’s a positive with an eye on Rally Finland later in the year. Tomorrow we’ll focus our efforts on the Power Stage and try to come away with some more points.”

Kalle Rovanperä (Driver car 69)
“It’s been a really nice day and it feels good to be in this position tonight. We know the first stage this morning was the most difficult stage of the rally, a really technical stage with brand new pacenotes, and we prepared really well for that knowing that we could make some difference. It didn’t feel so good, but it was clean and I was trying to push and the time was really good. After that we could make a gap and then manage it on the second pass, where the conditions were quite rough. There were some tricky places with big ruts but we managed it quite well. Tomorrow is going to be a long day still: In this position we need to be focused all the time to not make any mistakes but still have a good rhythm.”

What’s next?
There will be six stages in total on the final day of Rally Estonia, formed from two loops of three tests without service in between. The final stage of the loop will serve as the rally-ending Power Stage and finishes next to the service park.