TOYOTA GAZOO Racing in a very close fight in Finland

Three Toyota Yaris WRC drivers form part of a very close top five covered by just 7.9 seconds at the end of the first day at Rally Finland. Elfyn Evans is third overall after an excellent stage win in the darkness of Friday’s final test, just ahead of Esapekka Lappi’s privately-entered car in fourth and Kalle Rovanperä in fifth, with Sébastien Ogier in seventh. 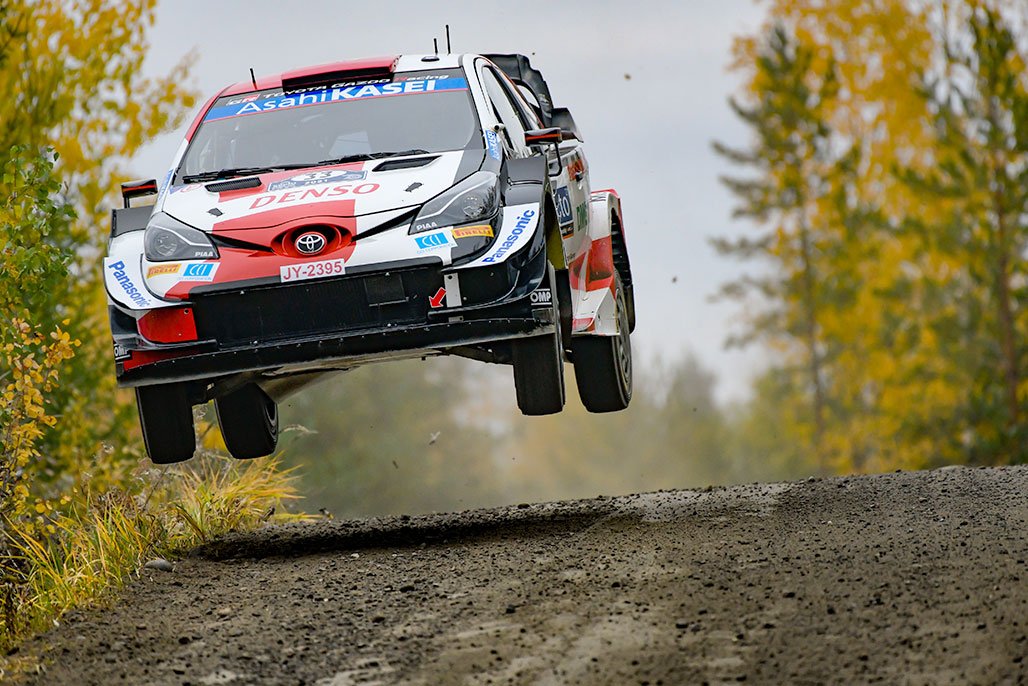 After shakedown was held during the morning, the first Rally Finland to be held for over two years got underway with six fast-paced stages through the afternoon and into the evening around the host city Jyväskylä.

In the face of tough competition from rivals, Evans and Rovanperä have been consistently among the frontrunners in the stage results. For Evans, the best performance came in the closing Oittila test run after sunset when he claimed a stage win and closed up on the leading duo, ending the day 6.1s away from top spot.

On the day he celebrated his 21st birthday, Rovanperä also showed strong speed on his home roads with second-fastest times on the repeat passes of the Ässämäki and Sahloinen–Moksi stages. He ended the day 1.8s behind Evans.

With his focus on taking another step towards securing an eighth world championship, Ogier experienced a more difficult day running first on the slippery roads. A strong drive in Oittila however brought him to within 2.3s of the driver ahead overnight.

Lappi had an impressive first day back in the Yaris WRC – also his first outing in the top class in 2021. He rounded out the day only 0.6s behind Evans in fourth overall.

TGR Rally Challenge Program driver Takamoto Katsuta began the event on a high with a stage win on the traditional Harju test on the streets of his adopted hometown. In SS2 he performed a fine save when he spun in a high-speed section, avoiding damage to the car, and lies eighth overall tonight.

Quotes:
Jari-Matti Latvala (Team Principal)
“Like it often is here at Rally Finland, it’s a very close fight at the moment. Our rivals are certainly bringing a tougher challenge now on these fast roads, but in this last stage tonight in the darkness our drivers did an excellent job and that has helped to make it even closer going into tomorrow, when all of the leading cars will have similar road positions. For me, Elfyn and Kalle both did great days. Seb is naturally thinking about the championship, and if you are a little bit careful here you can lose quite a lot of time by the end of the day, so his position is understandable and we will help him to try and find more time tomorrow. Of course, Esapekka’s performance is great to see on his first day back in the car.”

Sébastien Ogier (Driver car 1)
“It was not a great day for me today. We were hoping for better. There should be at least three cars in front of us tomorrow, so hopefully that will be better for us, but we need to understand exactly why we had no pace today. For sure, part of the time loss today was down to road position but that was not the only reason. I have to understand if I was just too slow or if there is something we can do with the car setup. The grip was not fantastic but I still enjoyed the driving, so I was surprised to be losing so much. The night stage I was expecting to be very challenging but actually this one went better than I expected; our lights were working well there.”

Elfyn Evans (Driver car 33)
“I’m relatively happy with how it went out there today. The feeling has generally been good in the car. There are some areas where I’ve struggled a little bit more and we still need to work on, but overall I’ve enjoyed the day. We obviously had a strong time in the final stage; it’s never easy driving in the dark and especially at these speeds, but the pacenotes were working quite well and I just went with the rhythm. Tomorrow’s a massive day with four rather different stages, and two of them are brand new. It’s close now in the top five, and anything can still happen, so we have to keep doing our best and see what comes.”

Kalle Rovanperä (Driver car 69)
“It has been a really demanding day with tough conditions and a lot of new pacenotes. I think it was a difficult day for everybody with the grip level, which was really low. For us the first pass was not easy but we will try to improve the setup for that for tomorrow, and the times were better on the second pass. It is really close and everything is still open. Of course, after pushing really hard the whole day you would prefer the time gap to be the other way around, but we will try to do something about that tomorrow.”

What’s next?
Saturday is the longest day of the rally, with 151.95 competitive kilometres making up over half of the event’s total distance. A loop of four stages to the south of Jyväskylä around Jämsa will be repeated after mid-day service, with another pass over Harju to round out the day.