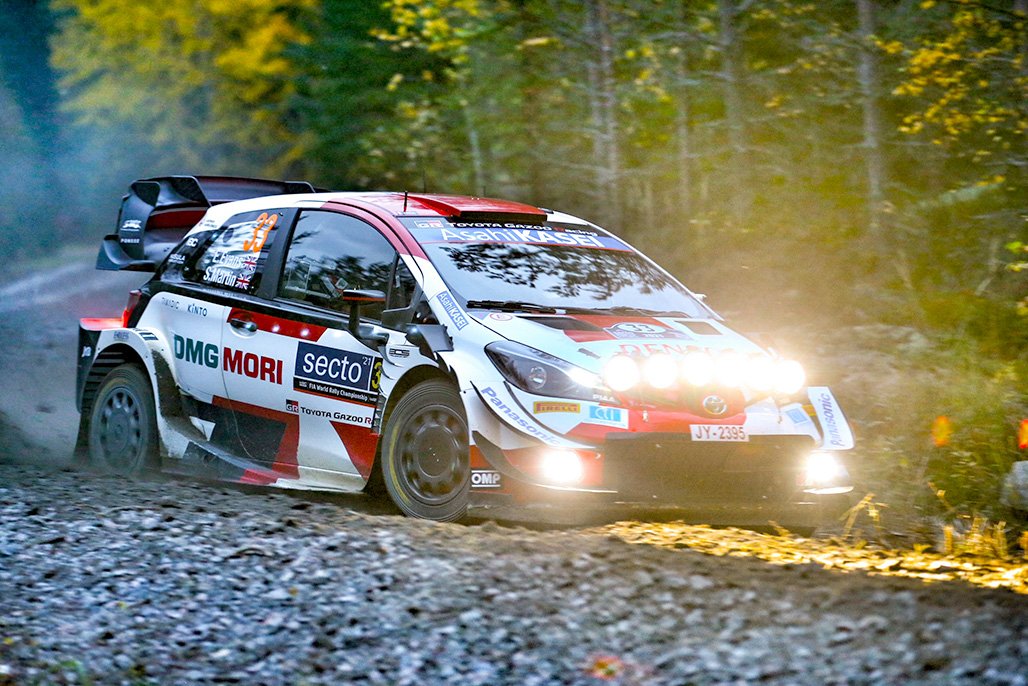 Evans started the longest day of the rally (featuring a total of nine stages) in third position overall as part of a very close top five covered by less than eight seconds. Making the most of his improved road position compared to Friday, the Welshman was in outstanding form during the morning loop to win all four stages. His SS8 win took him from third to first overall, and he opened up a lead of 5.6s before lunchtime service.

The afternoon loop was closely-fought but Evans continued to add to his advantage and took another impressive stage win in SS14 as darkness fell. After setting the equal fastest time in the day’s closing Harju stage, his lead stands at 9.1 seconds with four stages remaining on Sunday.

Sébastien Ogier showed improved pace during the afternoon after making changes to the setup of his Toyota Yaris WRC, and climbed up to fifth place on the overall leaderboard.

Kalle Rovanperä went second-fastest to Evans in SS9, but his day ended on the following stage after he went off the road and hit a bank of sand, damaging the front end of his car. However, the team has been able to fix the car so that he can restart on Sunday.

Esapekka Lappi continues to run fourth overall in his privately-entered Yaris WRC. TGR Challenge Program driver Takamoto Katsuta stopped in SS8 after running wide and damaging the rear-right corner of his Yaris WRC. He will restart on Sunday.

Quotes:
Jari-Matti Latvala (Team Principal)
“We are really happy to have a driver in the lead of Rally Finland going into Sunday. Elfyn has been incredible today. We knew he had the speed but to be in this position in Finland and increasing the gap to the competition like he has is remarkable. It’s great for him and for us as a team. I’m feeling confident going into tomorrow: There will be pressure from behind but we know those stages well from the past and Elfyn’s speed is enough – he just has to avoid mistakes. It’s been good to see Seb looking more confident this afternoon and he’s now in a better position overall. As for Kalle, we have to remember that this was his first time driving this rally in a World Rally Car and he’s been fighting with drivers who have done this event many times. It’s just a matter of experience and I’m sure he will be much stronger here in the future.”

Sébastien Ogier (Driver car 1)
“This morning it was still difficult for me, the speed was pretty much the same as yesterday. The championship has been too much in the back of my head and I was not daring enough. But at lunchtime we made a setup change which made the car much more enjoyable to drive. It gave me more confidence and the times were quite good if you consider that we were still running quite early on the road. So this is a positive: At least I have some answers now for my lack of pace at the start of the rally and we could find a solution. Elfyn is doing a really strong rally and can close up in the championship, but I still have the Power Stage tomorrow to try and recover some more points.”

Elfyn Evans (Driver car 33)
“I’m pretty happy tonight, it’s been a strong day. It was a good morning for us, the car was working well and I just tried to keep a good rhythm. We made some minor changes last night to improve a few areas that weren’t working quite so well yesterday, and now I have a car that gives quite a lot of confidence, which helps a lot here and makes it easier to push like we have. There was a little bit of time dropped in some of the stages this afternoon but overall we can be happy with the day. There’s still quite a way to go tomorrow, so we just have to focus stage-by-stage and keep doing what we’ve been doing.”

Kalle Rovanperä (Driver car 69)
“The first couple of stages this morning were again quite tricky on the bigger roads, the grip level was really low and it was not suiting my setup and driving so well. On the third stage which was more technical and with more grip, straight away the feeling was really good and we could set quite a good time. Then on the next stage I made a mistake in a really simple corner: The cut was deeper than I expected, and it pulled us sideways towards the inside. I tried to save it from spinning but there wasn’t enough space and when we came back to the road, we went into this pile of sand on the other side. It has been a tricky weekend for me but hopefully we can restart tomorrow.”

What’s next?
The final day of Rally Finland is similar to previous years, formed by two passes over the Laukaa and Ruuhimäki stages to the east of Jyväskylä. There are 45.74 competitive kilometres in total, with the second pass of Ruuhimäki – famous for its big jumps – to host the rally-ending Power Stage with bonus championship points on the line.