The TOYOTA GAZOO Racing World Rally Team has claimed an amazing one-two finish on Rally Italia Sardegna, with Sébastien Ogier scoring his third victory from five events so far this season and Elfyn Evans taking second to complete a remarkable result that extends the team’s advantage in the championship. 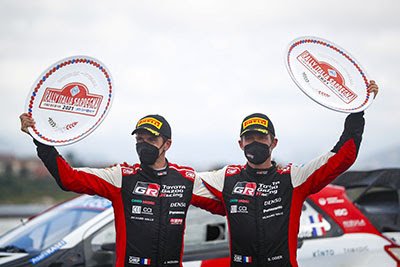 The team’s maiden Sardinia win came after a fast and reliable performance from the Toyota Yaris WRC and its drivers, who were able to overcome their disadvantageous positions at the head of the road order on Friday. Ogier was particularly impressive opening the road on Friday, ending the day in third before climbing into the rally lead on Saturday, when Evans also improved his confidence and speed to rise to second.

Ogier and co-driver Julien Ingrassia safely managed their advantage through the final day’s four stages to clinch their fourth Sardinia victory and first since 2015.

Evans, co-driven by Scott Martin, started the final day with a strong stage win in SS17 to increase his advantage over third place, and was also fastest in SS19. In the final stage he was slowed after water entered the car in a watersplash, but the buffer he had built earlier meant his second place was secured.

With two bonus points for the fourth fastest time in the Power Stage, Ogier now leads the championship by 11 points over Evans, who is in turn 18 points ahead of the driver in third.

Taking three bonus points for the third-best time in the Power Stage was Kalle Rovanperä, who together with co-driver Jonne Halttunen had been forced to stop by a technical issue on Friday while running in second position. With the help of their additional points, Toyota now has a 49-point lead in the manufuacturers’ standings.

Three Toyota Yaris WRC crews finished inside the top four, with TGR WRC Challenge Program driver Takamoto Katsuta repeating the personal-best finish of fourth he recorded on the previous round in Portugal to continue his recent progress. On the final day Katsuta took a steady approach to secure the result while his co-driver Dan Barritt was feeling unwell as a result of dehydration due to the heat in Sardinia. Barritt was checked and released by doctors after the finish.

Quotes:
Akio Toyoda (Team Founder)
“I’m so proud that the team could finally win in Sardinia for the first time. Finally we could enjoy the tradition of jumping into the sea at the podium, and the one-two finish should make even the salty sea water taste nice. Congratulations!

I was there in Sardinia for the rally two years ago. Preparing a towel and a change of clothes, I was already thinking about how to dive in safely. However, the Yaris WRC, which was leading the rally, suddenly slowed down on the final stage. Even now I still feel sorry for Ott who was driving the car back then.

Thanks to Seb, Julien, Elfyn and Scott, who drove really well on the very demanding roads in Sardinia, we were able to find out how delicious the sea water is. My appreciation also goes to the team members who have been working to enhance the reliability of the cars. But there is still a lot for us to do, and I’m really sorry for what happened to Kalle and Jonne. I am sure that Jari-Matti, together with all of the team members, will continue making our cars stronger already from tomorrow.

Lastly, I would like to thank our fans for their passionate support. The next event is Kenya, which will be a totally new discovery for our team. I appreciate your continued support for us.

P.S. To Dan,
We can fix a car over and over, but Takamoto cannot compete without you. I think Takamoto put your health condition first and drove steady at the end. Together you made a very good decision. Please remember that health is always the most important! ”

Jari-Matti Latvala (Team Principal)
“This is a fantastic result for our team. We came here to Sardinia knowing that it would not be an easy rally for us, that we would not necessarily be able to win, but in the end we are celebrating a one-two. It was not a perfect weekend because of the problem that Kalle unfortunately had on the first day and we need to learn from this to be stronger in the future, but otherwise the three other cars were working really well on these tough stages. Overall we had performance, we had reliability and we had consistency. It’s very good news for the championship, but we know the competition is getting tougher all the time so we need to keep working if we want to have more results like this.”

Sébastien Ogier (Driver car 1)
“This has been an incredible weekend for us: We could not have expected to come away from Sardinia a result like this. To have one-two for the team, starting first and second on the road, is a fantastic achievement. I’m also very happy that we managed to find a better feeling with the car and react after Portugal, where maybe the speed was not as great as we wanted. Unfortunately in the Power Stage we had a misfire briefly after a watersplash which was very aggressive, but we still took two bonus points which is good for the championship. If we can keep this rhythm up we can be confident, but of course it’s never that easy.”

Elfyn Evans (Driver car 33)
“Second place is a great result that we definitely would have taken after our struggles on Friday morning. This morning we didn’t have such a huge gap behind us so it was good to be able to extend that advantage further, and it’s probably just as well given what happened later on in the final stage. We seemed to take in some water and I wasn’t sure it was going to clear, but thankfully it did and it quickly went back to full power after that. It’s a slight disappointment not to take any extra points from the Power Stage because of that, but at the same time I’m relieved to hang on to second place.”

Kalle Rovanperä (Driver car 69)
“Our aim today was to get as many points as we could from the Power Stage. Our starting position still made it a bit tricky, as there was some cleaning to do with only two World Rally Cars in front of us. So I had to make my own lines in many places and lost a bit of time with that, but I tried to push a lot and we came away with the third fastest time. Overall it was a really disappointing weekend from our side, but we just have to move forward. The positive thing is that the feeling in the car is good again after Portugal, and hopefully we can continue like this.”

What’s next?
The iconic Safari Rally Kenya returns to the WRC calendar for the first time in almost 20 years on June 24-27. With a reputation for gruelling conditions, the African gravel event promises to provide an all-new challenge for the current crop of drivers.