The TOYOTA GAZOO Racing World Rally Team has two drivers in the top three following the opening pair of stages on Rallye Monte-Carlo: The first round of the 2021 FIA World Rally Championship. Kalle Rovanperä made a fine start to his second year at rallying’s top level and is second overall with team-mates Elfyn Evans third and Sébastien Ogier fifth. 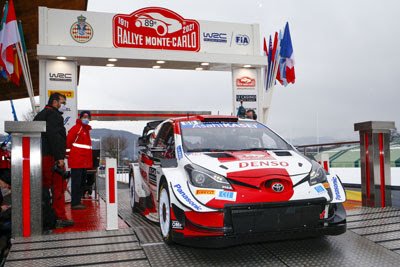 Unusually, there was no shakedown held before the rally, meaning the drivers went straight in to the first two competitive stages on Thursday afternoon. These were held in mixed conditions typical of Rallye Monte-Carlo, including wet roads and icy sections.

Rovanperä was the fastest Toyota driver in each stage, posting the second-best time on both occasions – and only 0.3 seconds from the top time in SS2. He is 3.3s from the rally leader overnight. Evans was third-fastest on both stages and is 5.2s behind Rovanperä. Ogier showed some caution while managing an issue related to the braking system but he is still within 17s of the lead in fifth overall.

Quotes:
Jari-Matti Latvala (Team Principal)
“Overall it has been a good start to the rally for the team, to have all three cars within 17 seconds of the lead with many challenging days to come. It was tricky for the drivers with the new tyres as we haven’t been able to test them in the kind of wet conditions we faced this afternoon, so they were learning about that during the first two stages. Kalle, for me, did an amazing job. I would never have expected him to have the speed that he had right at the start of the rally. Elfyn did a good performance and a clean drive too. Unfortunately Seb had a problem with the brake pedal, and as a driver I know that’s not a comfortable feeling to have, so of course he had to be a little bit careful. But it was a good clever drive from him to get back to service and we will change the parts tonight so that it will be fixed for tomorrow.”

Sébastien Ogier (Driver car 1)
“I had a cautious start in the beginning of stage one, because I have very little experience with these tyres and I needed to get a bit of a feeling. Then in the middle of the stage I started to have this brake issue, and so then the rest of the loop was tricky. When you are not confident with the brakes it’s quite hard to drive on the limit. It’s not an ideal start but for sure we will keep fighting and I’m quite sure the car will be 100 per cent tomorrow morning and now it’s up to me to do my best. Tomorrow morning it will be a super early start with probably some tricky conditions, so there is still a long way to go in this rally.”

Elfyn Evans (Driver car 33)
“It was a difficult couple of stages to open the rally. It was quite wet and we had a lot of surface changes, so the grip was changing all the time. To top it off we had a delay waiting to start the second stage, so we had to enter it with cold tyres and that was pretty difficult. Immediately we went into a narrow village with ice on the road, so it was very difficult to generate temperature and gain confidence. But we got through it. We have the possibility of more wintery weather tonight, so we’ll have to wait until the morning and see what conditions we’ll face.”

Kalle Rovanperä (Driver car 69)
“The feeling was good in the first loop. The first stage was quite nice. It was my first time driving on wet asphalt with the new Pirelli tyres but the feeling was good. The second stage was much more tricky with the ice, but there the pace was also quite good and I enjoyed the challenge. I was a bit surprised about the pace because it didn’t feel so fast or a big push, but the car felt good. Tomorrow will be really tricky starting in the dark with ice and snow maybe but we’ll try to keep the same pace up.”

What’s next?
On Friday morning the crews will head west out of Gap for a loop of three new stages. The first test, Aspremont – La Bâtie-des-Fonts, is set to begin at 06:10, nearly two hours before sunrise. The first two stages of the loop will be run again in the afternoon following service. 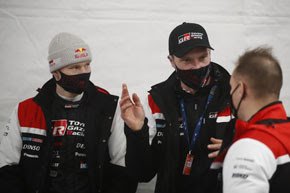 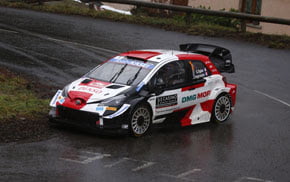 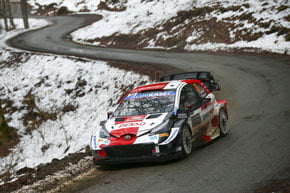