The TOYOTA GAZOO Racing World Rally Team produced a strong Saturday at Safari Rally Kenya, with Sébastien Ogier winning half of the day’s six stages and joining fellow Toyota Yaris WRC driver Takamoto Katsuta in a podium position heading into the last day of the event. 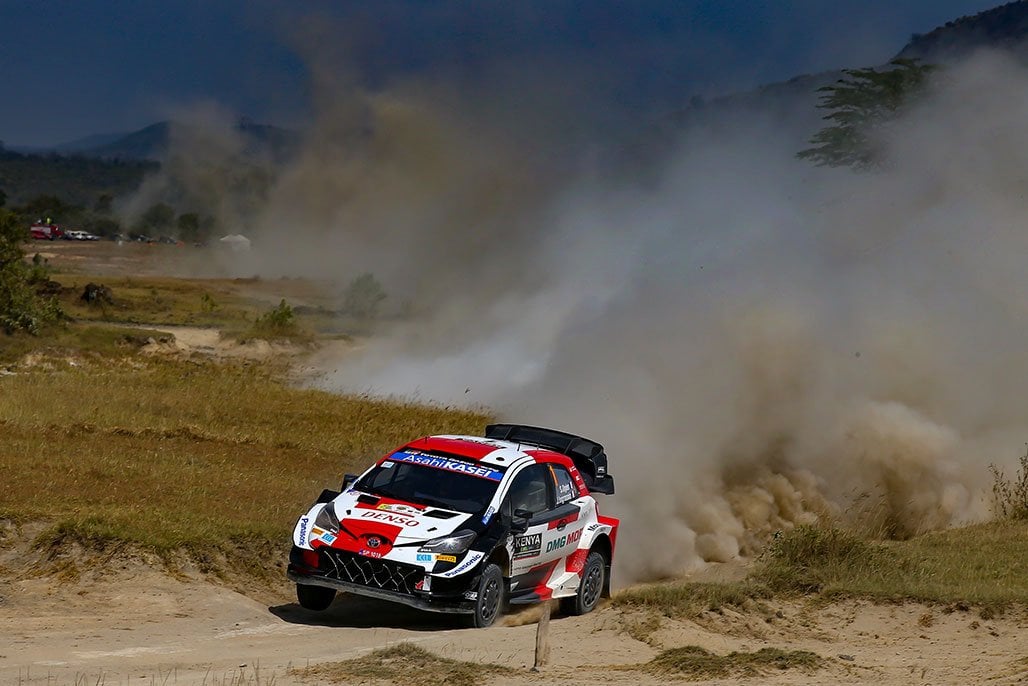 Starting the day in fourth overall, Ogier’s pace helped him to increase the pressure on those ahead of him, reducing the deficit to third place to 36.5 seconds prior to the final stage of the day. There, heavy rain made the Sleeping Warrior stage very muddy and slippery, and Ogier capitalised on the demanding conditions to move up into third.

TGR WRC Challenge Program driver Katsuta again drove strongly throughout the day to maintain his second position overall, even through the drama of the day’s final stage. There are 18.1s between Katsuta and Ogier on the leaderboard, with the latter more than a minute ahead of fourth place.

Both Kalle Rovanperä and Elfyn Evans returned under restart rules after incidents led them to retire from Friday’s action. Rovanperä remains on course to score points in seventh overall, while Evans has moved up to 12th.

Quotes:
Jari-Matti Latvala (Team Principal)
“We have to be very happy with how we have performed today. All of the drivers have been doing a good job and the cars have been running well without any issues. When the rain came in the final stage it made for some big differences in the times between the drivers, and that helped Seb to gain third position. But that’s the way the Safari is: Things can happen here and that’s why we need to be really focused for the final day of the rally, because it’s going to be more demanding than today in terms of the road conditions in the stages.”

Sébastien Ogier (Driver car 1)
“It’s been a positive day. I think we did everything we could today, with a good pace, we kept the pressure on and it’s good to be back in the podium places tonight. We didn’t expect to have so much rain in the last stage; it started to pour down like crazy after five kilometres or so. We knew that when the ground here gets wet it can be very slippery and this was confirmed. Some sections were like driving on ice, so I’m very happy I kept the car on the road, and it also allowed us to gain a position. Tomorrow there are still some very rough sections to go through though, so it’s far from over.”

Elfyn Evans (Driver car 33)
“It was good to be back out today and to get experience of the stages here. It was quite difficult to read the road ahead in some places, so good pace-notes were quite key. In the afternoon the stages hadn’t deteriorated too much since the first pass, which was quite a surprise given the conditions we saw yesterday. But our main focus was on bringing the car back in one piece and making sure that we have a good car for tomorrow. The stages we have tomorrow are very demanding with quite different character between them. Of course we’d like to target the Power Stage if we can; let’s see how it goes.”

Kalle Rovanperä (Driver car 69)
“The plan was different today, as we couldn’t really gain positions just through our driving, so we were just trying to avoid issues and see if something happens in front. The stages were not so soft today, so they were a bit more enjoyable to drive and we could keep the pace up without taking any big risks. Tomorrow I think the stages could be quite soft like on Friday, so it will be interesting to see how rough the conditions will be and what we can do on the Power Stage, because we still need to take care of our overall position as well.”

What’s next?
The rally ends on Sunday with a total of five stages around Naivasha. The Loldia and Hells Gate tests will both be run twice, the latter serving as the rally-ending Power Stage on its second pass.