TOYOTA GAZOO Racing gets to grips with tricky Ypres asphalt

The TOYOTA GAZOO Racing World Rally Team completed the opening day of its Ypres Rally Belgium debut with all three drivers in the hunt for podium places: Kalle Rovanperä is fourth, Elfyn Evans fifth and Sébastien Ogier sixth, and all are within 8.2 seconds of third place overall. 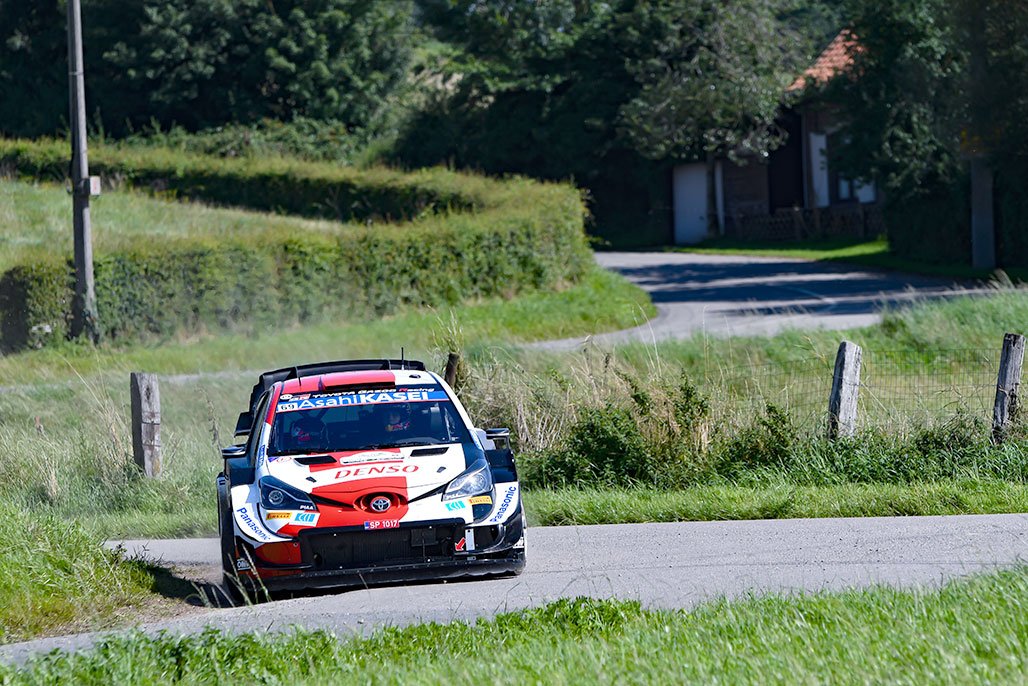 Making its first FIA World Rally Championship appearance, the event is a brand new challenge for the Toyota team and all of its drivers, none of whom have ever competed before on the tricky asphalt stages around Ypres.

Friday began with shakedown during the morning and a chance to make final preparations before a scheduled eight stages through the afternoon and evening. When the competitive action got underway the drivers faced a lack of grip on the stages, with dry weather in the region this week meaning that those running at the head of the field had a layer of dust to clear.

Evans set the pace for the team during the opening loop of four stages, posting consecutive top-three stage times and returning to Ypres for the late-afternoon service only 0.8s away from third overall.

During the subsequent evening loop, Rovanperä – fresh from his maiden victory on the last round in Estonia – edged ahead of Evans overall in SS7. With the final stage of the day, SS8, being cancelled for safety reasons, Rovanperä lies just 1.4s from third place overnight and 0.8s in front of Evans. Ogier enjoyed a much-improved second loop, setting the second fastest time in SS7 and closing to within six seconds of Evans.

Quotes:
Jari-Matti Latvala (Team Principal)
“Today was not our strongest day but it also wasn’t the worst. Maybe we are slightly disappointed because we were hoping to be a bit closer to the front, but we always knew that it would be difficult to fight against those who have the experience of this event. Unfortunately you just can’t buy that experience. But we have three drivers who are very close to the podium, and I hope we can put some more pressure on tomorrow. Our drivers all found improvements from the first loop, they were getting a bit more confidence and hopefully we can take that rhythm into tomorrow, which will be another challenging day.”

Sébastien Ogier (Driver car 1)
“It was not an ideal start for us today. In the first loop the pace was not great. It was difficult to find grip running first on the road, and I really didn’t expect the dust to play as much of a role as it did. On top of that there was some room for improvement in the setup. In the second loop it was going in the right direction. It’s not perfect yet but we made some steps in the setup which made me feel more and more confident. I still have some ideas for tomorrow to hopefully make another step forward. Now we have to focus on that fight for the podium.”

Elfyn Evans (Driver car 33)
“It has not been an easy start to the rally. With changing grip levels and a mix of different surfaces it’s difficult to find confidence. Some sections felt pretty good, but in some sections I struggled to be fully at one with it. I think we got through the first loop quite OK, trying our best to keep in touch with the leaders. This evening I had a pretty good feeling in the car to be honest, but the times seemed to be not as competitive, so we need to understand why that was and try to be better tomorrow morning.”

Kalle Rovanperä (Driver car 69)
“Today has been quite demanding with tricky conditions all the time, as we expected. I don’t have so many kilometres on asphalt in this car or with these tyres, and it can be tricky to know the grip level on these stages because it’s changing a lot. I found it easier this evening now that I knew more about the conditions, so I could push a bit more but without taking too much risk and it was quite enjoyable in the car. I could match my team-mates quite well, and the fight is quite hard now for the podium.”

What’s next?
Saturday consists of another loop of four stages to be run twice, taking place mainly to the south of Ypres. The first test of the loop, Hollebeke, is the longest of the rally at 25.86 kilometres.