The three TOYOTA GAZOO Racing World Rally Team drivers are separated by only 4.3 seconds in an ultra-close battle for the podium going into the final day of Ypres Rally Belgium, with Elfyn Evans lying third overall just ahead of his team-mates Kalle Rovanperä and Sébastien Ogier. 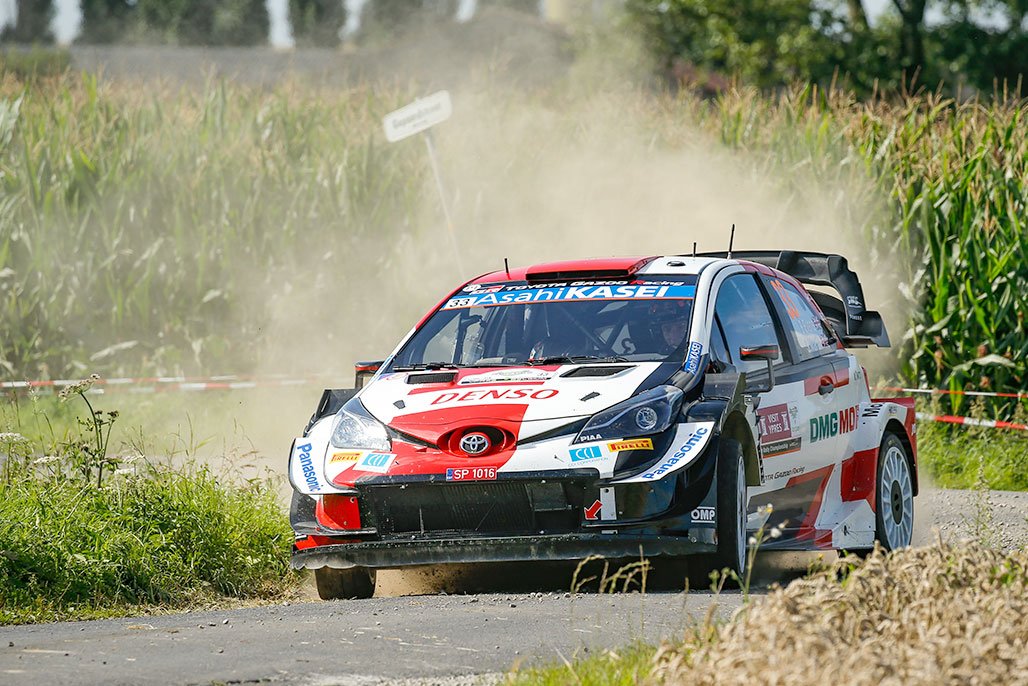 After a day of learning on Friday on an all-new event for the team and its drivers, a strong step forwards in performance was made across the eight stages on Saturday. Evans already climbed up into third overall on the morning’s opening test Hollebeke, the longest of the rally at 25.86 kilometres, and later went on to set the fastest time in SS11. In the afternoon, Ogier recorded stage wins in both SS13 and SS15.

In the day’s final stage it was Rovanperä who came close to a stage win of his own, setting the second-fastest time and finishing the day 3.3s behind Evans with just one second further back to Ogier.

TGR WRC Challenge Program driver Takamoto Katsuta’s rally came to an early end when he crashed in SS10. Both he and co-driver Keaton Williams were unhurt.

Quotes:
Jari-Matti Latvala (Team Principal)
“It has been incredibly close between our drivers today. The really nice thing is that they have shown such consistent performance, and I’m really glad to see their speed is so closely matched. The drivers did a good job and I’m happy with the step in performance we made from yesterday. Of course it would have been best if we could be fighting for the victory going into the final day. But still, tomorrow is important with extra points available for both championships in the Power Stage, and I’m looking forward to it. The stages will be new for everybody and probably a bit cleaner. Hopefully we can score nice points tomorrow.”

Sébastien Ogier (Driver car 1)
“Today for me it was a little bit the same trend as yesterday. The grip has been very low on the first pass of the stages, but surprisingly it is much higher on the second pass. Then I can carry much more speed into the corners and enjoy it. It’s a shame that we lose so much on the first pass, but at least we are still in the fight. 4.3 seconds is not that much, so tomorrow we have to try to drive well and see where we end up.”

Elfyn Evans (Driver car 33)
“This morning was a bit better than yesterday and everything was working quite OK, but it’s been a bit up and down since then. Overall I would say we have made some steps forward from yesterday. In the shorter stages we lost some time and that’s not ideal, but it means we have a close fight for tomorrow. I’m looking forward to giving it our all. Both stages have a real mix of character within them with a lot of things going on, so we need to have a car setup that will work everywhere.”

Kalle Rovanperä (Driver car 69)
“Today has been really nice. I think in some places it was a bit more dirty in some places from the cuts with a lot of loose gravel on the road, and that’s one area I still need to learn more about, because when it’s clean like on the last stage we have really good pace. With our lack of experience I’m really happy that we have been able to match our team-mates and it has been really tight between us. Tomorrow is going to be interesting because the stages are a different style, and it’s going to be nice to drive on the track at Spa.”

What’s next?
On Sunday the rally moves nearly 300 kilometres to the east of Belgium and the iconic Spa-Francorchamps racing circuit. A pair of stages will be run twice, both combining public roads with sections of the racetrack itself.