The 52nd annual 2019 SCORE Baja 1000 will be etched in the minds of competitors for the challenge that Mother Nature created. The Baja Peninsula was pummeled with 4 inches of rain in the days leading up to the race. Unlike other forms of motorsports, Offroad racing competes rain or shine; it does not cater to those who need comfort. Baja courses are legendary for the incredibly tough terrain they cover, and a little rain is usually a welcomed respite from the dust, but the amount of moving water opened up deep ravines, and created inland waterways that were just impossible to traverse. When 14 times Baja 1000 winner Larry Roeseler shares his doubts in the driver’s meeting, you know it’s bad. He’s one of the toughest guys out there. The race had to be delayed 24 hours so that SCORE officials, and an army of Baja locals could do their best to repair the worst of the worst. Despite their hard work, plenty of perils still remained. There was virtually no dust to speak of, but the amount of rocks, ruts, and deep mud that shifted during the storm posed incredible challenges. The loose ground caused the ruts to get very deep in areas that are usually hard packed, and due to the loop layout of the course, after a long day running down the coast, crossing over the mountains past Mike’s Sky Rancho, and the endless whoops in San Felipe, they would have to come back on the same route they took out of Ensenada. Even the starting procedure was changed due to the wash where the entire field usually thunders through was full of water. The race vehicles took a ceremonial start in Ensenada, then were escorted through the streets where they were cued up again and let go around race mile 3.5. 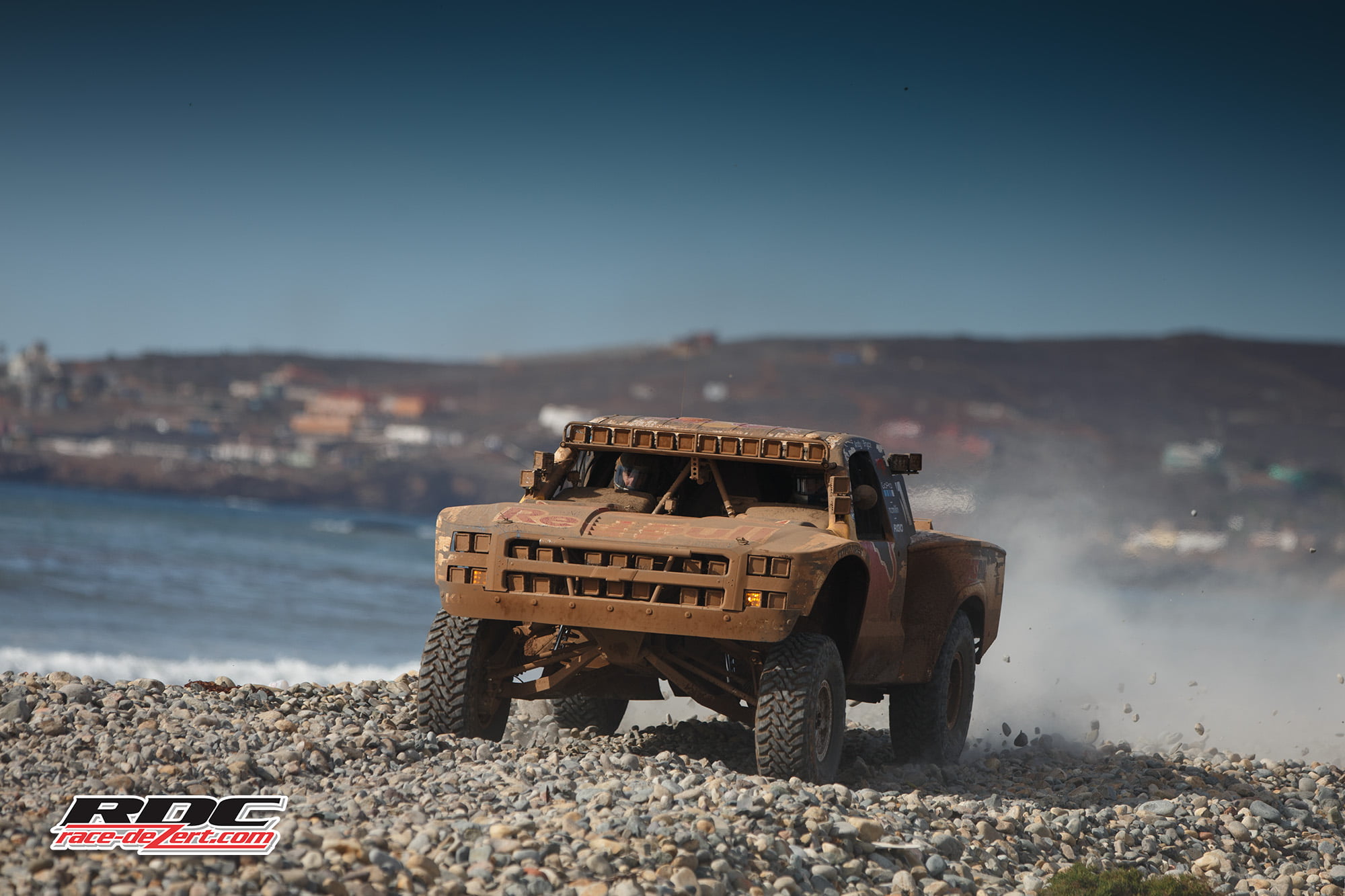 As with many of the Baja 1000’s lately, much of the talk before the event was about the super teams that are formed for this race. Bryce Menzies was driving with fellow RedBull athlete Andy McMillin in Andy’s truck. Tavo Vildosola was sharing his truck with short course, and desert racing champion Brandon Arthur. Luke McMillin was teamed with the winningest driver in Baja, Larry Roeseler. Luke’s brother Dan was driving with Ryan Arciero in Ryan’s Levi’s truck. The goat, Rob MacCachren had Justin “Bean” Smith to share the driving. Even Dakar racers Nasser Al Atliyah, and Toby Price were teaming up in a brand new Mason Motorsports 4WD truck belonging to Jesse Jones; the list went on, and on.

Despite all the established talent, thousands of hours, and piles of cash invested, it was the second generation, and local Ensenada brothers Alan, and Aaron Ampudia who put their stamp on this race with a convincing win in their Four Loko, Papas And Beer, ID Designs Trophy Truck. After a grueling race, the entire Ampudia family was so proud to win for their countless fans on their home turf. The brothers are long time racers. They cut their teeth in the 1600 class, like many of the greatest racers have, and raced in class 8 like their father, and Uncle did back in the day before hitting the pinnacle of offroad racing; a Trophy Truck win at the Baja 1000. They took the lead in the most demanding section of the race, through the mountains. As others had problems, they continued to push the pace out front. 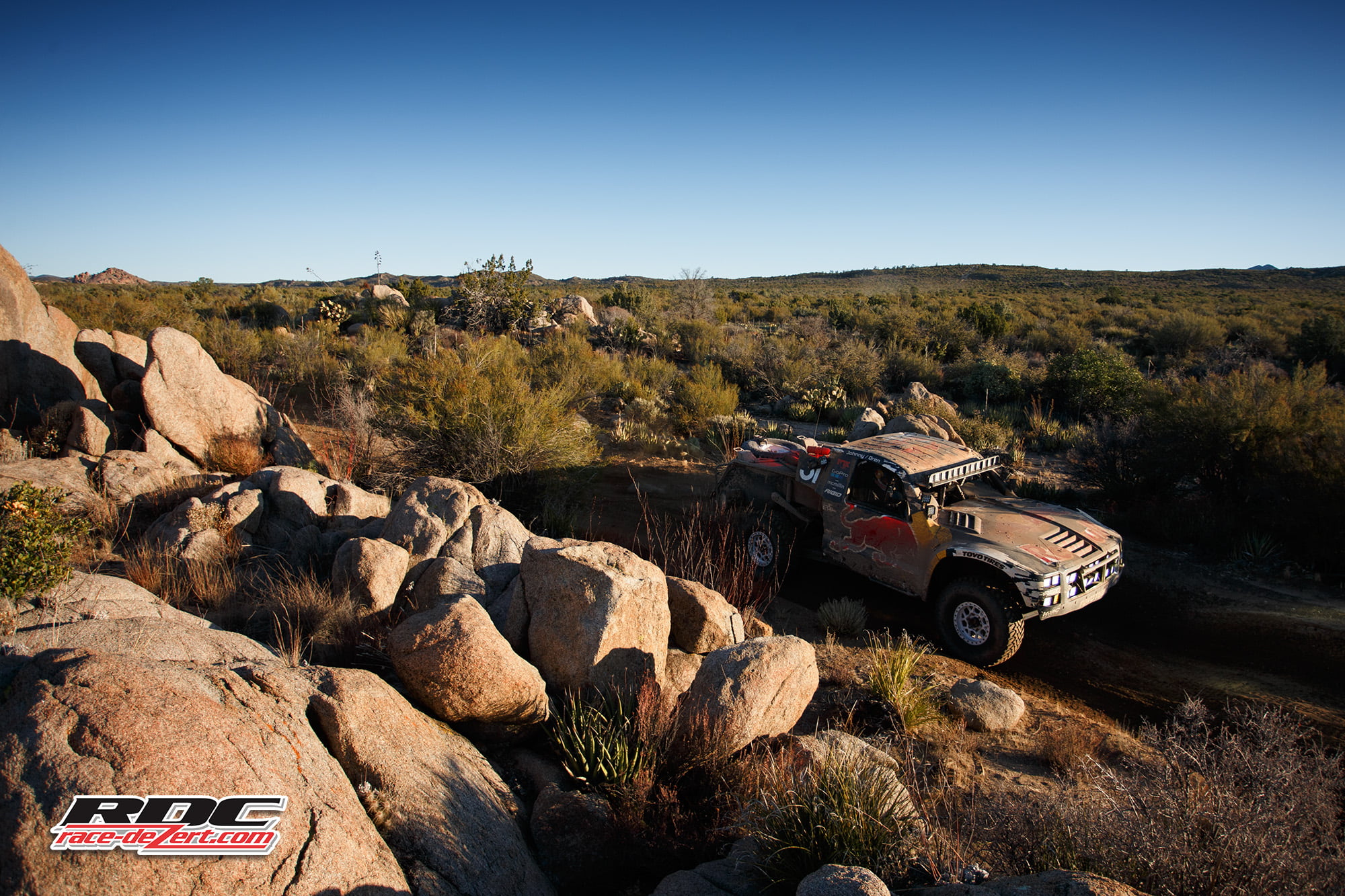 Bryce Menzies put Andy’s truck on its lid, and then once they were going again with Andy driving, they lost the torque convertor in the transmission. Larry Roeseler handed the truck off to Luke McMillin with good track position, but they lost a power steering pump so Luke had to muscle the truck around some of the tightest, and scariest corners on the mountain. You just can’t imagine how difficult it is to turn 40 inch tires with no power assist. The same terrain spelled doom for Tavo Vildosola who also lost his steering; breaking the box. In a great show of sportsmanship, Tavo took the sportsman’s cut off before the backside of Mike’s so as not to create a bottleneck for his fellow competitors. Rob MacCachren started towards the rear after having a rough race at the Baja 400, (the finishing order for the 400 was used as the starting order for the B1K). He simply could not make up the time needed to catch the leaders. Surprisingly, it was Al Atliyah, and Toby Price who had the least amount of troubles driving in a brand new truck. Price had just 10 miles of test time, Al Atliyah had 25. Bryce Menzies did the initial break-in on the truck and called it ready to go. Another surprise was when Al Atliyah sought to find the limits of the truck during his brief testing session and rolled it before the race; hats off to the Jones crew for giving them a podium worthy truck to race with. Of course, all results are still unofficial pending a full review of trackers, and penalties. 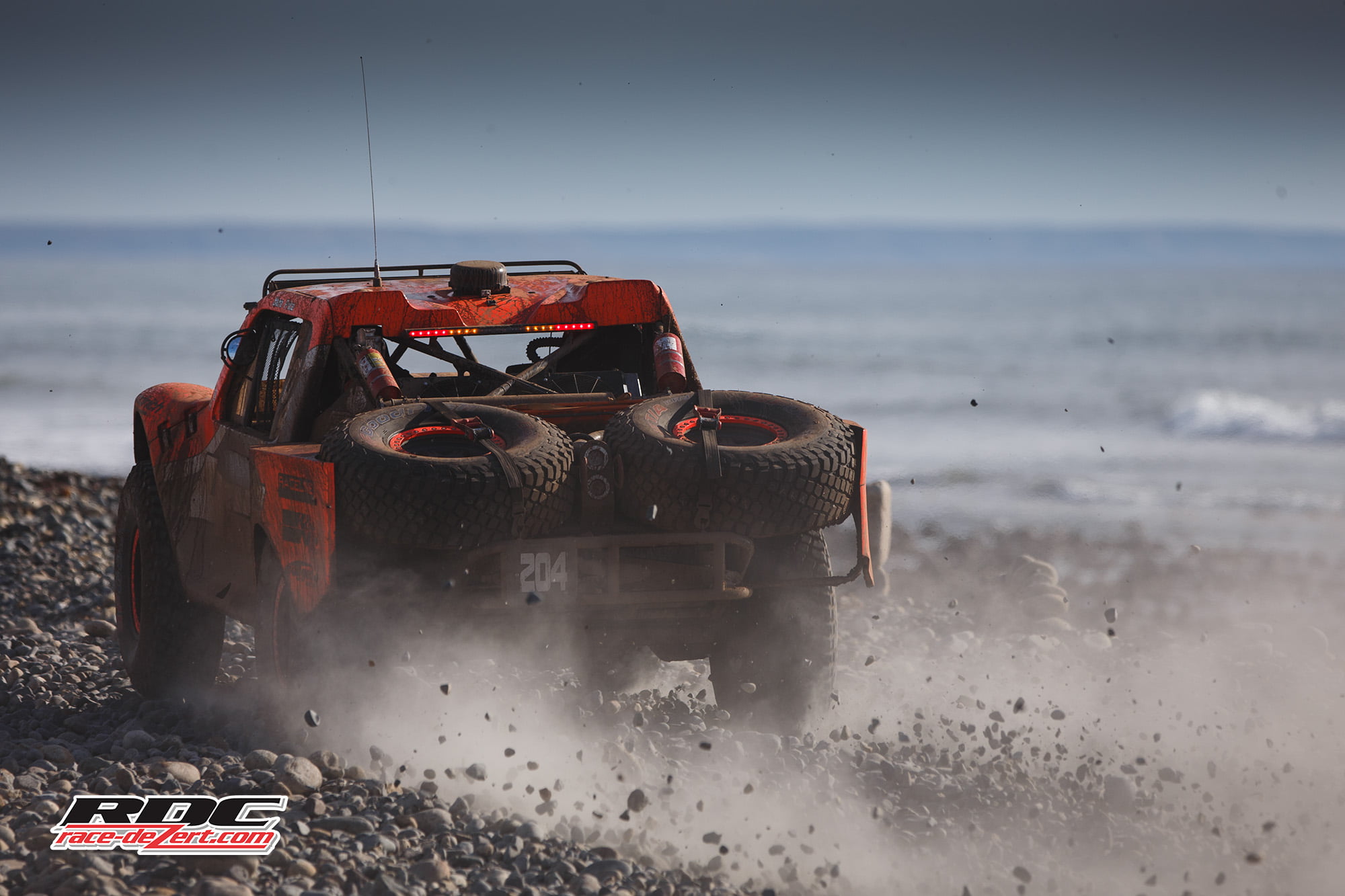 The second fastest class was the spec Trophy Trucks, partly due to Brock Heger who started for AJ Jones. He pushed Sara Price and the rest of the field to play catch up. Sara had finished 2nd place at every race this year, and was in contention for the class championship. She was her own super team, driving the entire distance without relief. It looks like her 2nd place finishing streak is intact; Jones took the win.

Class one was interesting as the normally strong Wilson Motorsports team was out around the half way point. Brendan Gaughan put together a good group to race in his car. They put RJ Anderson behind the wheel to start, and he was blazing fast. He alluded to a few “moments” behind the wheel, and not to tell Brendan. RJ looked like he was dipped in chocolate when he got out of the car due to the mud, but his pearly whites could not be missed. They took the class one victory. 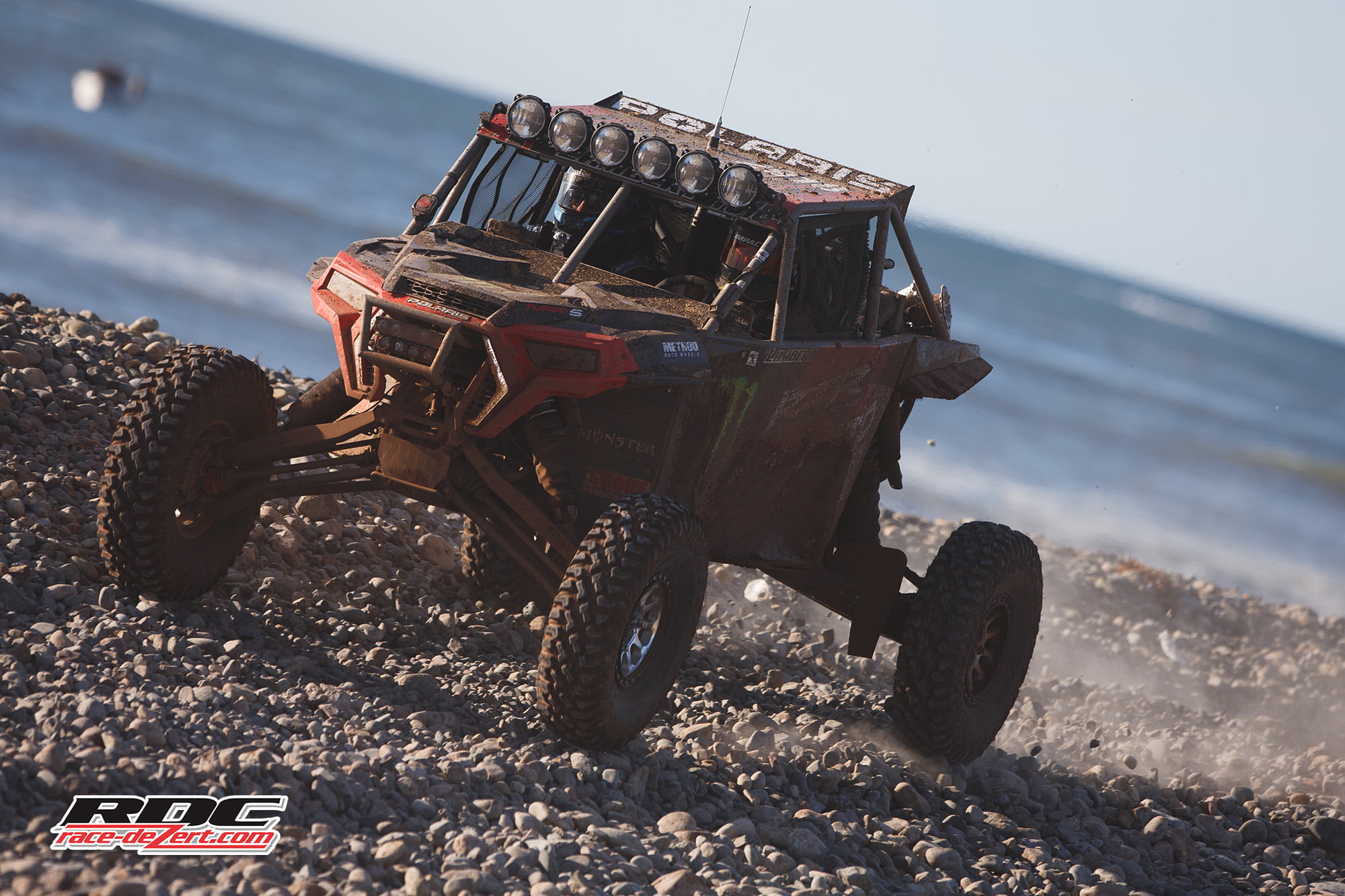 Many of the results are still in question, but we know that the Matlock’s put on a heck of a show in the UTV classes. Wayne was in the lead of the turbo class all day long. He looked like a sure bet, again, but Justin Lambert caught him to take the win. Monster Matt Burroughs had a great run to finish third. Kaden Wells, and Kristen Matlock battled back and forth in the naturally aspirated class, but Kristen finally emerged from the pack to lead for good, and she took the win with Wells in second. Like Sara Price, she drove solo the entire way. It was Kristen’s 4th Baja 1000, her first win, and she drove the entire way every time. For a while both Matlocks were leading their respective classes. 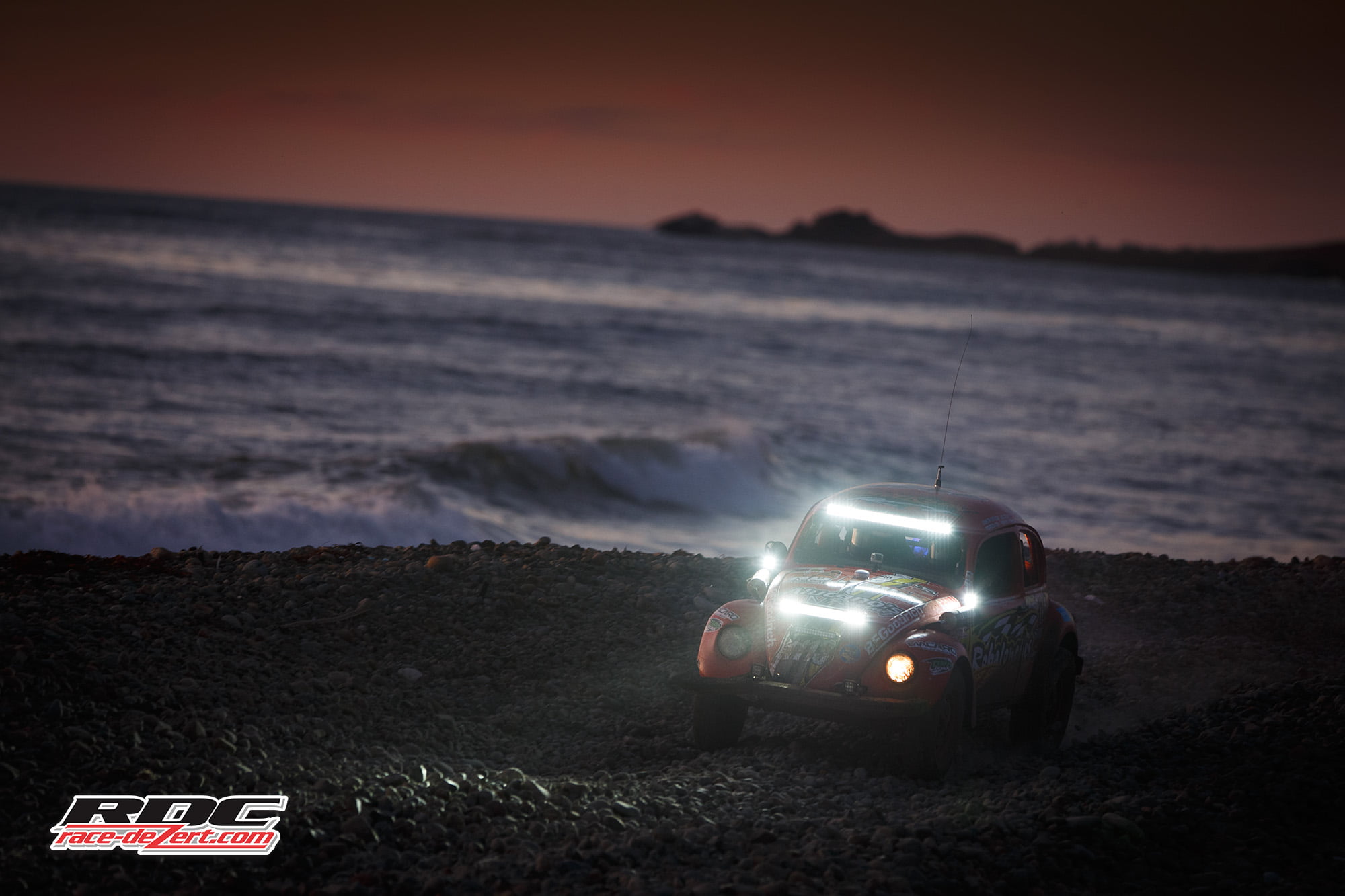 The Baja 1000 is filled with stories of super human effort like that of Ironman bike competitor Art Babcock. When his team suffered a loss of their leader, he decided to run the race by himself. After 24 hours on the bike, he took the win; beating the odds on favorite Mike “Viking” Skurkis. The Baja 1000 is always a tough race, but this year’s rain soaked event was especially brutal. Larry Roeseler called it beforehand. After the race, he said he really had to dig deep. It was one of the toughest days for him. That sums it up for everyone involved.

M
Mike Ingalsbee
Great article.... You should do some research and get the name of the Chassis builder right for the overall winning vehicle though. It is an ID Designs race truck.

Thanks for pointing that out. Should have caught that myself. It's been fixed.

awesome pics as always - thanx
Luke's my brother, Andy is my cousin. How hard is that to get right and proofread? Ridiculous.
Great photos of the Bilstein 714f Racing Team!!