Most of us in the off-road world have thought it…and many of us have joked about it, but UTV’s are REAL racecars and they ARE changing the future of our sport for the better. Often times we find ourselves scratching our head as to how or why anybody would ever want to race something in a long distance desert race that is the size of a Smart Car and has the power-plant of a motorcycle or ATV. After watching the Mint 400 this year, it is time to start giving UTV’s the respect they deserve. I think it’s time we acknowledge the impact they are having on the off-road industry and how the manufacturers building these machines may actually become some of the biggest driving forces behind our sport.

Back in the “hay-days” of off-road racing it was Ford verses Chevy, verses Dodge, verses Nissan, verses Toyota, and at any one moment in time any of those manufacturers could win. Then due to the economy and lack of media coverage, along with numerous other reasons, manufacturer support went to the wayside – and it has barely been touched since. Although UTV manufacturers aren’t exactly putting the same amount of sponsor dollars or team funding out there yet, compared to what the big auto manufacturers were in their day, what we are seeing is true factory support for the first time in 4 wheel off-road racing since the mid 90’s. Yes, Honda & KTM are battling in Baja, but the reality is, the UTV class is the only class that has multiple, (not just two), manufacturers sinking tens…and in some cases hundreds of thousands of dollars into multiple race programs, both in the desert and in short course / MX style racing. How many other classes in off road racing can say they have factory support from five different manufacturers? 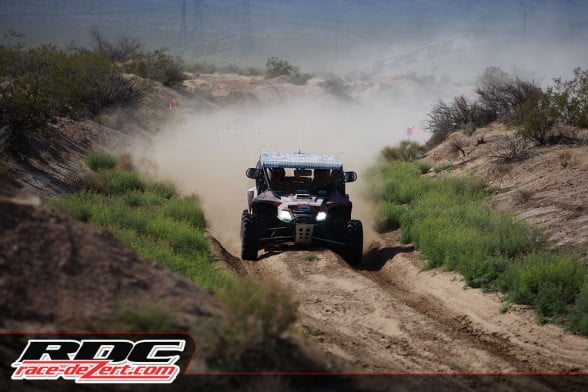 Not only do UTV racers have the factory support but they are also laying down some of the fastest laps against some of the highest dollar classes. In the 2 lap UTV (limited) race at the 2013 Mint 400, UTV racers put down an average finish time of 04:50:00 after two 100 mile laps through some of the harshest Nevada desert that you can find. In those 2 laps, the winning UTV (Coastal Racing Polaris RZR XP) beat; every single Class 8 truck, 6100 trucks, 7200 trucks, Class 10 cars, ¾ of the 1600 field and even TrophyLite’s. OK, I know, all those other trucks are dealing with TT’s and Class 1’s who are chewing up the course, but think about it. This same course was bad in the first race and UTV’s are racing on tires from 25” up to 30” tall and even the fastest guys are only sporting about 125hp, which for one of these UTV’s is a lot. They too are also racing against bigger trucks and buggies that are ripping up the course and are battling against almost 30 of their own fellow competitors! The point is, UTV’s ARE getting quicker and they certainly can hold their own in the desert. What made this even more exciting is three different manufacturers had a chance to win with less than 50 miles to go! Factory Can-Am, Polaris and Arctic Cat supported racers all had their chance to claim the top spot. And while the factory backed John Deere team had their share of troubles in the race – they still lined up and represented one of the largest (US) manufacturers in the world.

As the lead changed hands multiple times, the UTV race at the Mint 400 became more and more exciting to watch.  Scott Kiger drove his HOLZ built Coastal Racing Polaris backed XP900 across the finish line with a time of 4 hours and 40 minutes. Meanwhile…Joseph Vinagro in his Polaris XP4 and (the 2012 Mint 400 Champs) Jason & Derek Murray sat at the finish line in their factory Can-Am adding and subtracting to find out where they would stand on the podium. Kiger would have the first place position clinched, and a mere two seconds would separate second and third place. As luck would have it, the 2012 Mint 400 champs Jason & Derek Murray would miss out on the second place position by the slim margin of two seconds. The Murray’s couldn’t help but think about the time spent in the dirt changing tires, replacing tie rods and even getting out to check the CV’s. Without that downtime Jason & Derek could have possibly taken their Can-Am Maverick straight to the top of the podium and become the first ever repeat UTV Mint 400 champions. 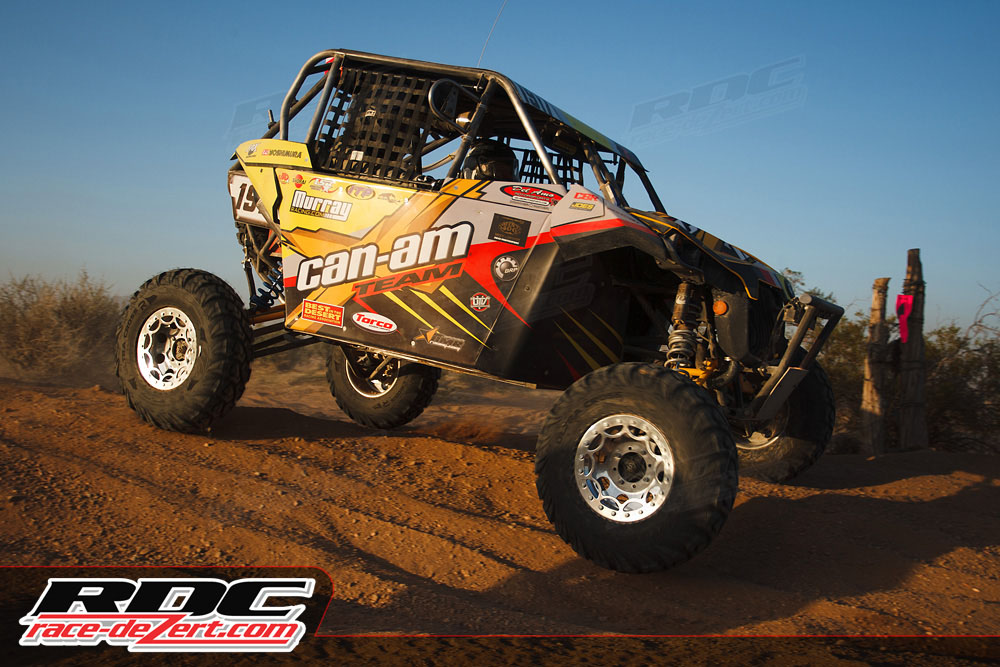 This 3rd place podium finish would be satisfactory to most out there taking on this brutal event.  We are sure the Murray’s were pleased to be on the podium at the end of the day, but their sponsor Can-Am wants nothing more than to beat their arch rival Polaris at every race, and that is a fact. That right there is the battle within the battle that makes this class and its potential for growth so exciting. The drive to beat a competitor is what motivates manufacturers to build bigger and faster factory based platforms, which in turn continue to draw in more new and existing off-road customers. Right now Polaris is dominating the field in all areas of UTV racing, but Can-Am and Arctic Cat in particular are not willing to lay down. Instead they are building bigger and faster machines – not only to give consumers what they want, but to provide the race market with the machines they need to go out and beat Polaris!

The battle is nothing new to motorsports and certainly not new for off-road. With that said this battle is and should be welcomed by all involved in this sport as the off-road racing segment currently is yearning for more exposure and growth. While 2 wheel companies continue to pull programs and 4 wheel auto manufacturers continue to look the other way, UTV manufacturers are here to wage war and invest millions into this culture and sport. The fact that John Deere is willing to put an effort together to compete in the off-road world should say something. This is a billion dollar company that could outspend just about anyone involved in the off-road world. There is no way they would spend a dime in off-road if they didn’t think there was substantial potential for growing their own market share. 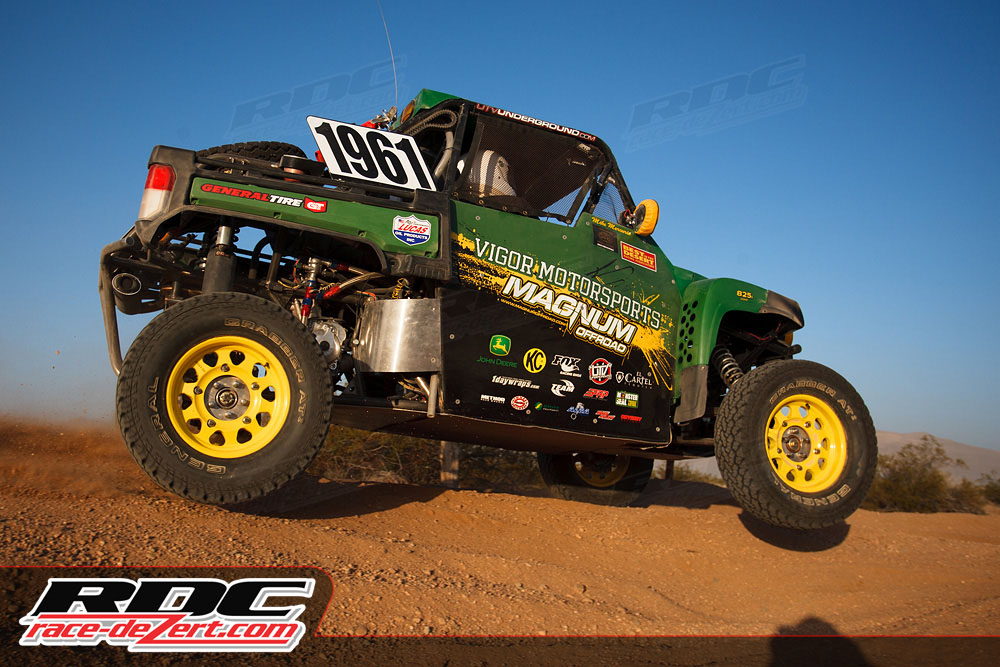 Figures surrounding the flagship UTV Polaris factory desert race team Jagged-X have been rumored to be in the $250K range per year. Whether or not its true or whether or not this would impress or surprise other off-roaders is beside the point. What has happened is Jagged-X has raced their way to earning their very own RZR XP model introduced by Polaris over New Years, at a million dollar party called Camp RZR. When was the last time you saw Chevy introduce the “BJ Baldwin Edition” Chevy 1500 or Nissan produce the “Carl Rennezeder Edition” Titan? In Glamis? On New Years Eve? With free hot dogs?

Jagged X not only races at the most elite level and has turned their championships into developing their very own “Jagged-X Edition” RZR, they have also drawn out Polaris Director of Sales and Marketing of the Off-Road Vehicle Division, Craig Scanlon into becoming a rising “no-joke” competitor in the Pro UTV class. I can’t remember IF or when the Director of Sales for Ford or Chevy ever came to an off-road race, let alone RACED it! Not only did Polaris sponsor the Mint 400 this year, they have also expanded their Jagged-X factory teams efforts to take on Baja. Matt Parks, racing for Jagged X, just won the San Felipe 250 in the newly founded Pro UTV class. Keep your eye on him for the Baja 500 and 1000. 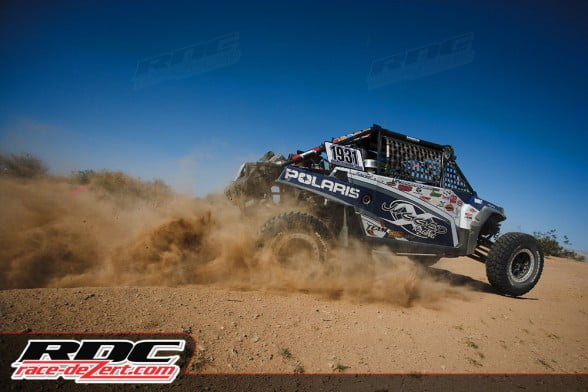 UTV’s are real off-road machines, their OEM’s are making a huge push in the sport of off-road racing, and they can be just as competitive as any other full tube chassis race car. In what other class can you go finance a machine for less than $20K and with around $10K more invested have a turn-key desert racer to go compete in an equally competitive class? Not to mention the machine you could be financing comes out of the box with up to 18” of wheel travel, 2.5” coil over / piggy back FOX Racing Shox, bead locked Walker Evans Racing wheels, power-steering, and just under 100hp in a 1200lb chassis! These machines are impressive and one ride around the desert or just a glance at one of the Jagged X Polaris backed race UTV’s will immediately open your eyes to their potential and just where they are at today.

Off-road racing isn’t cheap by any means, but with factory support and a huge fun factor, UTV racing is relatively affordable for the average Joe. The off-road community needs to take notice and the time is now.  So before you begin to think that these “golf carts” are just getting in the way and / or are just adding danger to an already dangerous sport, consider this, just who are you relying upon to help us keep this sport we all love growing and alive?

Jason Zindroski
a pig with lipstick is still a pig and a golf cart with offroad parts is still a golf cart!
Were the trucks it beat broken down?

Sorry was just curious if they were faster. I saw some footage of the 6100 trucks and looked like no comparison. Lol