The desert challenges keep on coming at the 2019 Dakar Rally 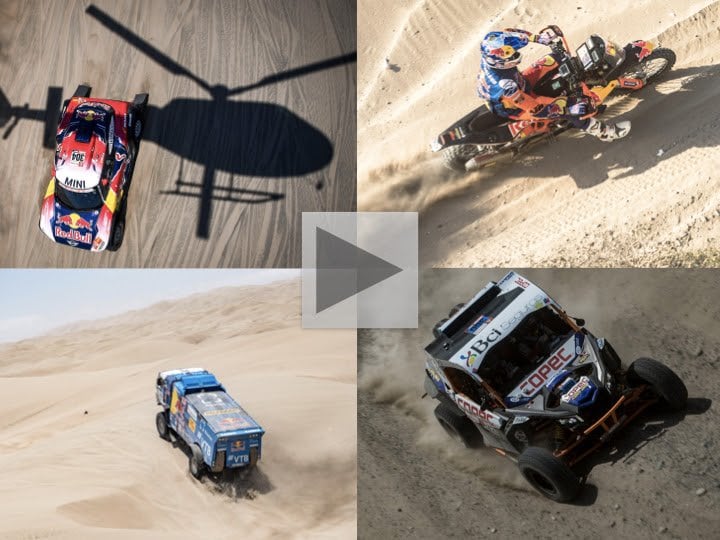 The first loop stage of the 2019 Dakar Rally had plenty of competitors going around in circles as they tried to find their way back to the bivouac in San Juan de Marcona. With over 300 kilometres of desert racing against the clock there were further fluctuations in the leaderboards by the time the dust had settled.

Getting the job done on stage seven was 13-time Dakar champion Stéphane Peterhansel (FRA) and his co-driver David Castera (FRA). Peterhansel went into today’s stage trailing race leader Nasser Al-Attiyah (QAT) by over 40 minutes – there was no option but attack. A stage win, clawing back close to 12 minutes on Al-Attiyah and moving to second overall represents a good day at the office for Peterhansel.

“We got a bit closer to Nasser, but it’ll be very hard to wrestle the lead from him.” – Stéphane Peterhansel

It was also one of the better days at the 2019 Dakar for Peterhansel’s companions in the X-raid MINI JCW Team. Carlos Sainz (ESP) collected his second consecutive third place on the stage while Cyril Despres (FRA) was in the Top 5 once again.

“We were able to push a bit towards the end of the stage and we arrived behind Stéphane (Peterhansel). That was the plan.” – Carlos Sainz

Al-Attiyah and co-driver Mathieu Baumel (FRA) are now just three stages away from Lima and giving Toyota Gazoo Racing their first Dakar title. They are benefitting from the support of team-mate Giniel de Villiers (ZAF) who is staying as close as possible to Al-Attiyah’s Hilux in case he can offer assistance on the stage.

“We got a puncture on the way home and had a battle finding a few waypoints. But all in all, not too bad. A nice run today.” – Giniel de Villiers

It was a tough stage for Sébastien Loeb (FRA) who was hunting a fourth stage win of this Dakar. The Frenchman lost 40 minutes due to an electrical issue in the first few kilometres. However, when Loeb got going again he was able to show his customary speed and eventually conceded less than half an hour to Peterhansel.

“It’s quite demoralising, we’ll see what we can do and what we can fight for in the coming days.”– Sébastien Loeb

The latest episode of Dakar Daily covers all the stage seven action in the dunes and in the bivouac, watch it on Red Bull TV right now.

After running into trouble on stage six, Sam Sunderland (GBR) bounced back in the best possible way and won today’s stage. The 2017 Dakar winner capitalised on an advantageous starting position to come through the pack with stage seven’s quickest time.

“I started out today with the intention to push a lot.” – Sam Sunderland

“I’m happy with the job I did and it’s one more step towards Lima.” – Luciano Benavides

“The last days at the Dakar are always very difficult.” – Matthias Walkner

Get stuck into the dunes with our Dakar vlog, Episode 1, Episode 2 and Episode 3

“We now just have three days left and everyday will be full gas.” – Chaleco Lopez

It was a bittersweet stage for truck race leader Eduard Nikolaev (RUS). The Team Kamaz Master trucker increased his lead at the front of the rally after misfortune beset his closest rival, and team-mate, Dmitry Sotnikov (RUS). Nikolaev now holds an advantage of over 30 minutes from Sotnikov.

We’re getting down to the business end of things now and potential winners are starting to emerge. It’s time to shake things up! Following the stage seven rankings, the best 10 bikes, 10 cars and five trucks will start at the same time on stage eight. This is sure to generate plenty of exciting wheel-to-wheel racing.

Stéphane Peterhansel: “At the beginning, we jumped over a dune, which damaged the bonnet and left us with a bad case of whiplash. Navigating was tricky, but I think we did well because we gained time on everyone. We got a bit closer to Nasser (Al-Attiyah), but it’ll be very hard to wrestle the lead from him. Actually, we don’t deserve to be ahead of him because he’s doing really well and has made no mistakes so far.”

Sébastien Loeb: “The car ground to a halt after three kilometres. We managed to get it up and running, but after five more kilometres it stopped again. It started stopping at increasingly shorter intervals. We started looking for the root of the problem until we found the right socket. It was a total power failure. Apart from this, we didn’t make any mistakes and were quite fast. It’s quite demoralising, we’ll see what we can do and what we can fight for in the coming days.”

Carlos Sainz: “We were stopped at one place for nine minutes and after that it was difficult to fight back. We were able to push a bit towards the end of the stage and we arrived behind Stéphane (Peterhansel). That was the plan.”

Cyril Despres: “We are back in a place that is always complicated. We have a mix of soft sand and dunes. Just like yesterday we were having a good stage, but then we ran into trouble. We slid down the side of a big dune and one of our tyres became removed from the rim. It was not easy to find a place to change the wheel.”

Nasser Al-Attiyah: “It was a very difficult stage. We had two flat tyres and we opened all the way. Then Stéphane (Peterhansel), Nani (Roma) and Carlos (Sainz) passed us in the dunes. In the last 50 kilometres we pushed and overtook those guys to be the first car back at the finish. We lost some time today, but it’s OK because things could have been much worse on a difficult stage like this.”

Giniel de Villiers: “The first 150 kilometres was offroad on a rocky mountain pass which meant you had to take care with the tyres. Then we had 100 kilometres in the dunes, the sand was very soft. We decided to stop and deflate the tyres to guard against any mistakes. We then got a puncture on the way home and had a battle finding a few waypoints. But all in all, not too bad. A nice run.”

Kuba Przygonski: “Yesterday we had a big problem with the gearbox. Today we started in the back after a lot of trucks. When you’re behind the trucks the tracks can be destroyed. We had to stop in the dunes to deflate the tyres. If we had not done this it would have been impossible to drive. We will try to fight more and more in the next days.”

Sam Sunderland: “Yesterday I was disappointed because I felt that I rode well and my navigation was good. It was just the nature of the stage meant that I was going to lose time. I also had the problem with my rear brake so that didn’t help. I started out today with the intention to push a lot. I was going well, but I lost a few minutes at one waypoint. That was frustrating, but I got back on track I feel pretty good.”

Luciano Benavides: “It was another long and difficult stage. There were some dangerous sections and you needed to stay aware of the navigation. I’m happy with the job I did and it’s one more step towards Lima.”

Toby Price: “It’s been a good day. I had a bit of trouble with one waypoint, but other than that it was OK. Tomorrow’s a new day and we’ll just do our best to get through that one as well.”

Matthias Walkner: “It was really hard. In the sand, if somebody takes the wrong line, everybody gets lost. I got a little bit confused with some notes and lost a little bit of time. The last days at the Dakar are always very difficult.”

Mohammed Balooshi: “It was another tough day, I’m happy that we could tackle and finish this stage. We had all the variety of dunes, mountains, rios and rocks. I really enjoyed myself in the dunes. We brought the bike to the finish, as is our task for this Dakar Rally.”

Chaleco Lopez: “I happy with our performance today. There were challenges throughout the stage, the finish was very technical. We now just have three days left and everyday will be full gas.”